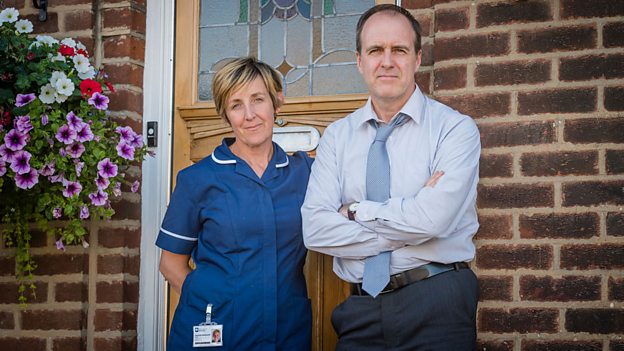 Amanda isn't a million miles away from Julie in spirit, just unhappier, so not huge amounts. I tried to make her a bit more Yorkshire, how successfully I don't know... she's from the Pennine borders!Julie Hesmondhalgh

Did you watch the first series of Happy Valley?
I certainly did. And, like everyone else, LOVED it. The moment where the young police woman was murdered had a massive effect on me. I'm someone who watches a lot of Scandi noir, so I'm quite tough as a viewer! It stayed with me for a long time. I know some people had an issue with the violence, but I didn't find it gratuitous. It's important for these things to be unglossy and that they emotionally affect us: the opposite of a sort of James Bond telling of violence and death.

How did you come to be involved in series two?
Thrillingly, Sally wanted me in it! So it was an offer.

How would you describe your character?
Amanda isn't a massive part in series two, but is a working mother - a midwife - with no small amount of spirit, a difficult marriage and some secrets of her own.

Was your character challenging to play?
The hardest part was remembering that I wasn't shouting at my own kids! I had a line telling them to get off the Playstation, but I kept saying iPad because that's what my kids get shouted at about! Kevin Doyle and I had some fantastic rows and we had a lot of fun with those. It all came quite easily I'm afraid to say!

How did you prepare for the role?
Amanda isn't a million miles away from Julie in spirit, just unhappier, so not huge amounts. I tried to make her a bit more Yorkshire, how successfully I don't know... she's from the Pennine borders!

What appealed to you about this project?
My love of the first series, and working with Sally Wainwright.

Are there any anecdotes you can tell us about that happened during filming?
Without going into too much detail, it was a funny and delightful thing to be introduced to a lovely actor, with whom I share many mutual friends, to rapidly film a bit of a sex scene late in the day's filming. So it was 'Hiya, lovely to meet you, let's get to it!' I love this job.

Why do you think series one was so successful?
Because of a strong and complicated mature female lead, her wonderful relationship with her sister (it's a rare and lovely thing to see women talking to each other on screen!), a STELLAR cast, and of course Sally's writing, which is a bit of a good start!

What were the biggest challenges you all faced during the shoot?
None for us really. The crew are so skilled, everyone knew what they were doing.