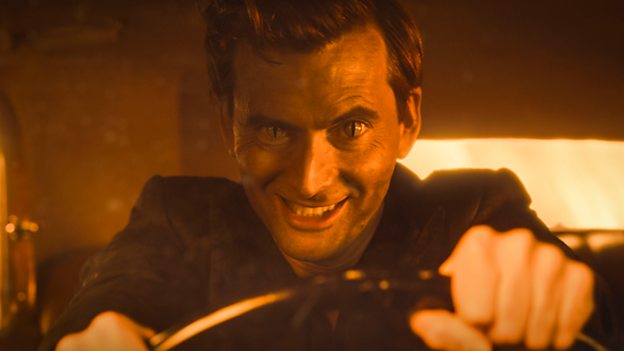 Good Omens sees the end of the world as a comedy rather than the tragedy it will be. It seems quite apposite to be doing it now.David Tennant

What first appealed to you about Good Omens?

It’s such a brilliant idea. Terry and Neil have created a world which is entirely fantastical, but which comes from something we recognise, something we identify with. The idea behind Good Omens connects with life as we understand it. We are talking about ludicrous flights of fantasy rooted in perfect sense and with impeccable internal logic. These stories all make clockwork sense - that’s why they appeal so much. Terry and Neil are licenced fools. They are speaking truth to power, and they get away with it by being so funny.

Neil and Terry use humour so well. Through that, we get to see humanity at one remove. It makes humanity look all the more preposterous, yet lovable at the same time. We can see why Crowley and Aziraphale don’t want to surrender this life. Yes, it’s mad and violent, but it is still better than heavenly order or hellish chaos.

What are Crowley’s defining characteristics?

He’s very louche. He lives life to the fullest. He is unscrupulous. But at the same time, although he would never admit it, he’s a demon with a heart of gold. In the same way that Aziraphale has a devilish glint from time to time, Crowley is in desperate denial about his good side.

What is so alluring about the relationship between Crowley and Aziraphale?

What makes their relationship so appealing and why we root for them both is that they have clearly come to depend on each other. They’re best friends. Each is the only one the other one has. They have been thrown together and have developed a reliance and a need for each other, which is very touching. They have a perspective on the world, have witnessed every decision that humanity has made and can see what they stand to lose.

Has it been useful to have Neil around as the showrunner?

Definitely. If he thinks an idea is good, he’s happy to consider it, rather than being stuck in a notion of what something should be. He embraces the fact that making drama is a collaborative experience. If you have a query or you’re not entirely sure about the intention behind a line, you can get a definitive answer very quickly. It’s been a lovely experience.

Which genre do you think Good Omens falls into?

Signs pointing towards the sets say: ‘BBC Comedy Production’. That keeps tripping me up, which is great. This doesn’t feel like a BBC comedy production - much as I love those programmes. BBC comedies are among my favourite shows. This doesn’t feel like the same department that produced The Good Life and Mrs Brown’s Boys. Good Omens feels like a hybrid. It’s at least a comedy drama or a comedy drama fantasy. You can keep adding adjectives until it finally makes sense.

Do you think sci-fi and fantasy have been unfairly sneered at by critics?

As people’s access to different types of shows expands exponentially, people are more willing to try new things and less stuck on genres than they used to. There are so many shows to keep up with that something which feels fresh and finds a new way of telling a story will have a chance of pushing through. Look at Game Of Thrones or Westworld.

By the time Good Omens comes out, will reality have outstripped fiction and will the end of the world be nigh?

The world appears to be going mad. It almost seems entertaining - until you think: “Hang on, this is real people’s lives.” And then it seems horrifyingly sinister. We keep paddling along, hoping for the best, but fearing the worst. Actually, that could be the catchline for the show!

Is this a good time to be making this drama about the end of the world?

Absolutely. I hope we finish it before the world finishes itself! What with everything going on, we need some release valves. Good Omens sees the end of the world as a comedy rather than the tragedy it will be. It seems quite apposite to be doing it now.