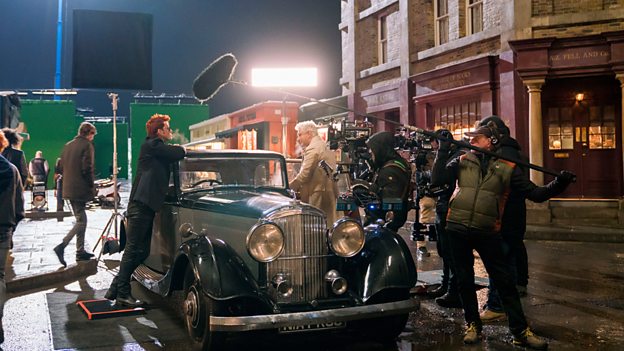 I love the fact that my approach was allowed to be no holds barred. The fact that I got so close to Neil’s vision with my imagery made it such a special project.Michael Ralph

How did you find it working with Neil?

It was amazing. This project is all about scale, imagination, humour, detail and thinking outside the box. It’s a big show, and I’m incredibly responsible for how it looked, but I never had one single thing questioned. The beauty of it is that it’s very rare that you click so accurately and without question with the showrunner. Even subliminally, we came up with the same imagery. I never had anything but applause from Neil. He hugged me when he saw certain sets. He was overpowered with joy.

Is there one set that you are most proud of?

I had tremendous fun creating heaven and hell. In Greek mythology, the Olympians were above the Earth looking down on everyone else. So I wanted to put our heaven in the best piece of real estate in the world and hell in the worst piece of real estate in the world. So I put hell in the basement of a skyscraper and heaven at the top of the same building. It had a big glass roof. I could see angels flying from the roof when they attacked during Armageddon. Heaven was set up so the gods could perform on it like a stage. It reinforced the concept that life is a stage. Then within six blocks, I put every single iconic building in the world, including the Eiffel Tower, the Empire State Building and the Pyramids.

What was your conception of hell?

My first image was to put them in an office in the middle of a massive underground car park with leaking walls that went on ad infinitum. People would be filling in forms that nobody used. There were so many corridors that you never knew where the hell you were. All you would hear was doors opening and closing in this massive lost bureaucracy. Neil loved that idea.

Was your wonderful imagination ever restricted by the budget?

No. I never ask how much money we have. The less money you have, the more imagination you use. In the 1980s, they used to say about me: “We’ve got no money, no time, no people, let’s ring Michael.” I take pride in that. I’m never restricted. If I go to work on big American productions, I don’t approach that any differently. I design for the camera. This is about telling the story through the camera, and we are there to support that story.

So your department is there to serve the story?

Definitely. There is no picture that doesn’t have an actor in the middle of it. We are not making a film about a set. It’s a film about the narrative.

Have you enjoyed your time working on Good Omens?

Absolutely. I love the fact that my approach was allowed to be no holds barred. The fact that I got so close to Neil’s vision with my imagery made it such a special project. I believe that will transcend the lens. It was an absolute joy working on Good Omens.