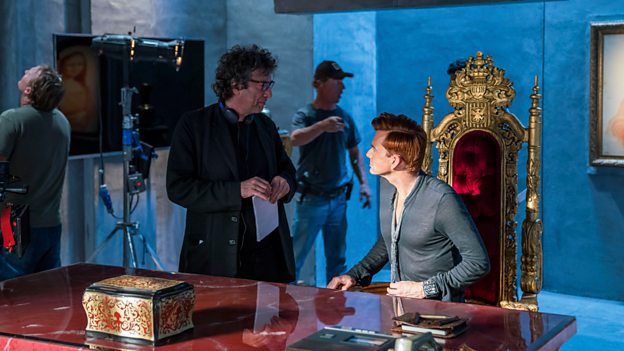 When I was writing the script, I was determined never to lose sight of the fact that on some weird level it’s a love story between Aziraphale and Crowley.Neil Gaiman

You wrote the original novel with the late Terry Pratchett. What did you love about Terry as a writer?

He was the most wonderful writer. He was a craftsman who regarded art in the same way that a really good medieval craftsman regarded his craft. If you build it right, it will be beautiful. You don’t set out saying: “I’m an artiste and I’m going to make something beautiful.” You set out saying: “If I craft it right, it’s going to be beautiful.” It’s like a 12th century cathedral or a piece of Chippendale furniture. It will inspire awe and beauty because it’s so well built.

Why is Michael Sheen so well suited to the role of Aziraphale?

He is a massive fan of the book. He read it as a 20-something at drama school and loved it. When this production was being discussed, he was the first person I went to. He said: “Ah, yes, you want me to play Crowley.” “No,” I replied, “I want you to play Aziraphale.” Crowley is the sexy dude in the sunglasses, but Aziraphale is the heart of this story. He is also the one that changes. That’s very important to the story - who changes? The Crowley at the end is the same as the Crowley at the beginning. But the Aziraphale at the end is not quite the same as the one we went in with. He’s grown and changed. I needed someone who could show that progress.

Why does David fit the role of Crowley so well?

In my head, David was the dream casting for Crowley, but I felt sure it wouldn’t happen. That’s the best way to avoid disappointment. So when David said he’d love to do it, I was just delighted. He brings an insouciance and a slouchiness which I love. He’s not playing it as Doctor Who or any other previous characters. His Crowley is so much loucher than that. He’s a slightly cynical, wonderful demon.

How did other castings happen?

We got a lot of people because they were big fans of the book. For instance, Jon Hamm read it and loved it, although he confided in me that he thought it was unfilmable! I wrote him an email saying: “I’ve written the new part of Gabriel. He is the leader of the angels. I need someone to play the coolest, smoothest, best-looking angel. Will you do it?” I quickly got reply saying: “Oh my God, I thought it was unfilmable, but I love these scenes!”

What did Douglas McKinnon give to the show?

What he brought to the production was even more than we were expecting. He and his director of photography have made something stunning. But the most amazing thing is Douglas’s eye for detail and just how unexpectedly beautiful he has made this world. It absolutely gives me a kick to see it brought to life. It’s magical.

So Douglas has endowed Good Omens with an amazing look?

Definitely. This world has its own visual language. It’s gorgeous and glorious. I showed an early version to Jeff Bezos, the head of Amazon. His reaction was: “It doesn’t look like anything I’ve seen before.” What a lovely thing to say.

For many years Good Omens was going to be a movie. Why does it work better as a TV series than a feature film?

Because when you have got six hours, you throw away less of the original book. You can even add stuff. When I broke down episode three, I realised there was not much of Aziraphale and Crowley in it. So I wrote a whole new 20-minute, mini-movie of Aziraphale and Crowley through the ages - in Roman times, with medieval knights, during the Second World War. How much fun was that! I got to indulge my inner fantasy. I was writing my own fan fiction!

Everyone is really committed to this production, aren’t they?

Yes. It’s a hugely loved book. A lot of the cast are huge fans of the book, which means that they’re very passionate about the project. For instance, Josie Lawrence, who is the only original cast member from the radio version of Good Omens, was desperate to reprise her role as Agnes Nutter, but at first it was impossible. She was opening that week in Mother Courage. But we really wanted her, so her director very kindly stood in for Josie at the technical rehearsal for Mother Courage - which never happens - so Josie could do Good Omens. People are willing to go the extra mile to be in this, which is wonderful.

Why is the book of Good Omens so popular?

People love the relationship between Aziraphale and Crowley. When I was writing the script, I was determined never to lose sight of the fact that on some weird level it’s a love story between Aziraphale and Crowley. People might grab the wrong end of the stick, but it’s a relationship that develops over 6,000 years. It’s a rather strange and glorious friendship between two incredibly different characters.

While Aziraphale means well, he’s wrong an enormous amount of the time. Meanwhile, Crowley is a demon who sees the worst in human nature and yet is right a lot of the time. There is a line from the book, where Aziraphale says: “Imagine how terrible it would have been if we were at all competent!” They are gloriously incompetent, and the fact that they’re more human than they care to admit drives the plot and is one of the things that people love about Good Omens.

What do you hope that viewers will take away from Good Omens?

I hope people will fall in love with the characters. I want to make something that bears rewatching and gives you something more every time you rewatch it. I know moments in Good Omens pay off with repeated viewing. When you rewatch it, you think: “Oh my God, that’s why they set that up.” Mostly, I want audiences to walk away in love with Michael and David and want to spend time with these characters. The best thing about good TV is that you’re spending time with characters who become part of your family. I hope the characters in Good Omens will become part of your family.