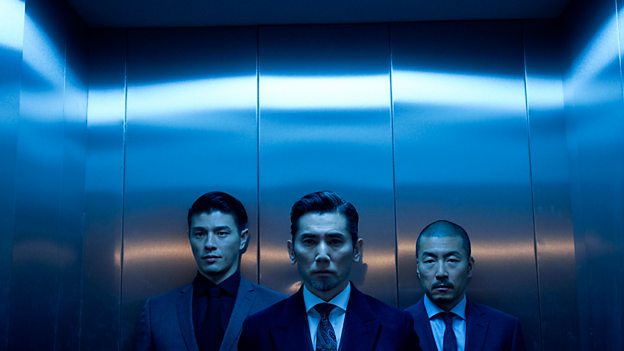 At its heart Giri/Haji is a tragic romance about two people with an instant attraction to one another who meet at the worst possible time. Also there are gun fights. It’s a whole thing.Joe Barton

"Giri/Haji came about from a brief conversation I had about seven years ago with my girlfriend at the time. She’d just started studying for a Masters in Forensic Crime Science at UCL and was telling me about her first day. Her fellow students were mostly recent graduates like her, except for one - a middle aged Japanese man, sat at the back of the lecture theatre on his own, diligently taking notes and looking out of place amongst his other, younger, classmates.

It turned out he was Tokyo detective, sent over to learn about forensic procedures used by the Met Police. Something about the image of that man sat by himself in a strange room in a strange country, many miles from home, stuck with me. And years later when I found myself preparing for a meeting with Jane Featherstone and needing to come up with some ideas to pitch I found myself writing down ‘Tokyo detective. Comes to London for some reason. Maybe find his brother??’ It wasn’t much of a pitch but luckily it struck a chord, and here we are.

Although it is ostensibly a crime drama, I wanted Giri/Haji to really be a show about misfits - broken people lost in a big city, trying to put themselves back together again.

Kenzo finds himself battling the Yakuza, London gangsters, the Albanian mafia and the Tokyo and Metropolitan police forces, sometimes all at once. But his real challenge is overcoming his inner turmoil. He and his wife are stuck in a dying marriage, plagued by guilt and unspoken pain, both of them needing to escape. When I wrote the series I had recently come out of a long-term relationship and I wanted to explore the oddly unique experience of feeling at once that the world is suddenly full of exiting new possibilities whilst also being endlessly, unbearably, sad. Which is admittedly a tougher pitch than ‘Yakuza gangster goes on the rampage in London’.

At its heart I think Giri/Haji is a tragic romance about two people with an instant attraction to one another who meet at the worst possible time. Also there are gun fights. It’s a whole thing.

One of the most exciting elements about making this show has been the sense that, creatively, everything was on the table. Sister Pictures, Netflix, the BBC and our directors Julian and Ben have been excited and willing to try all sorts of different techniques in bringing our story to life.

We’ve always felt that this was its own beast - a violent, foreign language crime-drama-romance-sometimes-comedy with half of the dialogue in subtitles. We gave ourselves permission to explore any idea that we had, however out-there. I’ve never had one of my TV shows greenlit before, it felt mad that we were being allowed to make this show at all and I wanted to throw everything at it, just in case they never let me make another one.

It’s been the best creative experience of my life. I still haven’t learnt any Japanese."

The Legend Of Giri/Haji

“Let me tell you a story. It

starts with Kenzo Mori. A Tokyo

Until his younger brother comes to

him for help. Yuto. The black sheep

of the family. He’d done something

very stupid. But, as it turns out,

not everything can be fixed. Fast

forward a year and Yuto is dead.

Just another Yakuza that met his

end in a hail of bullets. Except

maybe not... Because as Kenzo is

about to find out, the past has a

way of coming back to haunt you.

Rumours start to circle that the

younger Mori brother may be alive

and living in a far-off land. And

soon Kenzo is on a journey to see

for himself. Kenzo and Yuto. A

killer and a saviour. But which is

everywhere he goes, but so, as it

turns out, does his daughter -

girl who befriends a lost boy.

Rodney. Half Japanese, half

English. He thinks if he talks loud

enough he won’t be able to hear his

demons. But he doesn’t know yet

just how loud they can scream.

On his way looking for his brother

trying to escape something she

of eight million and they find each

other. So I suppose this isn’t just

a story about death. It’s a story

about life. And love. And

heartbreak. About the split second

decisions that we make and the

things we lose and win as a result.

It’s a story about gangsters.