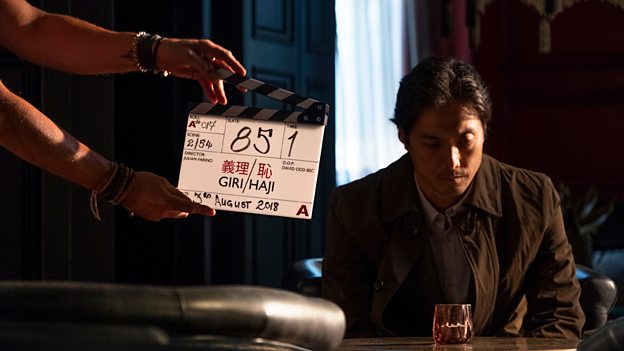 I hope above all that people are seduced enough by the dynamics of those characters to keep watching, to go deeper and deeper into it, and just sit back and enjoy it, because I don’t think it’s like anything else I’ve ever seen, honestly.Jane Featherstone

Why did the idea for Giri/Haji hook you when Joe Barton first pitched it?
I’d been a fan of Joe’s since we’d worked together on Humans, and when I set up Sister Pictures I asked him to come in and talk to me about some of his ideas. One of them was, 'A Tokyo cop comes to London in search of his brother, who was a Yakuza'. And that was it. I said, “I love that one. I’ve always been interested in Japan. Why don’t you write that?”

Why does Japan interest you?
It’s got a rich history, much like Britain’s in a way. I think there are many parallels. It’s an island nation. It’s a shipping nation. It’s a nation which has been at war internally and externally. It’s a nation of suppressed emotions. And then there are massive differences. I’ve also always loved Japanese art and movies. It’s just a fascinating culture, and a place I wanted to know more about. So this was one of those opportunities!

Giri/Haji is a stylistically playful, genre-blending narrative, how did that evolve during development?
We did several drafts of the first episode alone. But what I saw as we evolved it with Joe, as we added layers like the subtitling and the animation, was that he really wanted to expand the creative boundaries of this world. We said, “let’s just be bold and let’s try to find a new language of film-making. This is such an unusual story, let’s tell it in the most distinctive way we can”. And you can do that when you’ve got a writer like Joe, whose characters and dialogue are so founded in truth and humour and wit and reality. It’s not cartoony in any way. I think he writes the most incredible characters, so you can add these other elements that take you to a slightly heightened place.

We always talked about the series being a few inches off the ground, in such a way that it will enhance the pleasure of watching it I hope, and bring out some of the themes, and some of the visual contrast between London and Tokyo.

What were you looking for with your cast? It must have been a tricky proposition, because you were casting in two different countries.
Yes. Well, first of all, you just always look for the best actors. We didn’t need any marquee names in this, which is lucky because the characters Joe has written are very specific and quite unusual, so we just had to find the right people for them. But it started before we’d even got our lead director Julian Farino on board, when we cast Will Sharpe as Rodney. Will was working with us on Flowers as writer-director-producer-actor, and we were like, “how are we ever going to cast Rodney? Who is mixed-race Japanese and British and can do the humour and the range?” And Will was literally next-door! [Laughs] So he came on board first.

How did you settle on your Japanese cast?
We had an amazing Japanese casting director called Yôko Narahashi, who was a secret weapon for us. She worked out who was going to best fit with our style of acting. A lot of Japanese film-making is historical, or based around feudal Japan or martial arts, so it has a very particular flavour. We were looking for something much more naturalistic and modern, in terms of acting style. So she hand-picked a few people to bring in, and as soon as we met Takehiro Hira, Yôsuke Kubozuka and Aoi Okuyama, and all those actors, we realised they were so gracious and talented and wonderful. I mean really extraordinary people. We were very lucky.

Why was Julian Farino your choice for the lead director?
Julian is an expert in performance with actors, in leading the tone of the piece in terms of making it feel authentic and real, but still a bit heightened. We were trying to get a performance style that was unified, and didn’t want to underestimate how hard it is to direct actors speaking Japanese, so we needed someone who wasn’t afraid of that, who could embrace the language complexities.

Did you have any particular inspirations for the look of the series?
We did not want it too look like the clichéd version of Japan or London, so ‘anti-cliché’ was our guiding principle. We went for a slightly more muted palette: browns and greys and golds, rather than what you might expect, which is neon and harsh. The flashbacks have a very distinctive feel, so Julian chose to do some of those in a Cinemascope aspect ratio, with others that go to 4x3, and they’ll be graded slightly differently. So the show has lots of very beautiful flavours to it that hopefully will work together to tell the story.

Did you deliberately avoid cliché when it came to the culture-clash element of the story, too?
We don’t overplay the culture clash. That’s not really what it’s about. It’s about human beings who actually share a lot in common. It is a culture blend. It’s connecting humans who may have a different language and a different sensibility, but who share the same desires, loves, needs and hopes.

How do you hope audiences in Britain and Japan, respectively, will respond to Giri/Haji?
Because the first 25 minutes is in Japanese with subtitles, my sincere hope is that people will be seduced and intrigued by the otherness of that. And I hope our audience in Japan will find it a refreshing take on characters who they live with in a city that they’ve never seen before. But I hope above all that people are seduced enough by the dynamics of those characters to keep watching, to go deeper and deeper into it, and just sit back and enjoy it, because I don’t think it’s like anything else I’ve ever seen, honestly.