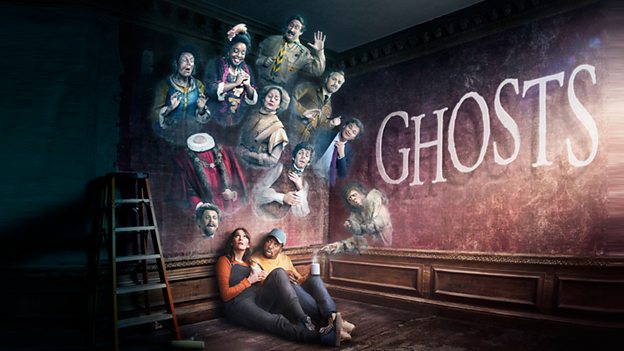 Alison and Mike, a cash-strapped young couple struggling to buy their first home, think their prayers are answered when a distant relative bequeaths them a sprawling country estate. The catch? The old house is haunted by the ghosts of its former inhabitants.

The restless spirits, horrified that the new owners plan to turn the peaceful pile into a bustling hotel, make plans to oust the troublesome newcomers. But their bungled efforts have unintended consequences…

Ghosts (6x30’) is a Monumental Television production in association with Them There. Tom Kingsley (Pls Like, Stath Lets Flats) will direct the series, and Matthew Mulot (Dead Pixels, Agatha Raisin) will produce. The creators will also serve as Executive Producers alongside Monumental's Alison Carpenter, Debra Hayward and Alison Owen.

Commissioned by Shane Allen, Controller of Comedy Commissioning and Charlotte Moore, Director of BBC Content. The Commissioning Editor for the BBC is Kate Daughton.

We meet the multi-awarding winning original cast of Horrible Histories below:

How did Ghosts come about? What’s the story behind it?

Mathew Baynton (pictured): Initially we just wanted to do something together. We knew Horrible Histories was finishing and it was before series three of Yonderland, which we suspected would feel like enough. We wanted to come up with another thing to do together so we hired out a room in town and threw some ideas around. I think the Haunted House thing was one of the first…

Laurence Rickard: And then we rejected it, because all first ideas are terrible, so we thought there must be something else!

Matthew: We all got really excited about the idea of us playing loads of ghosts! At the time, the idea was that we would play loads of characters each, as we’ve always done. We came up with loads of funny images and characters, but then when it came to writing the stories we realised they don’t need jobs, they don’t fear death… they’re already dead!

It suddenly felt like there was no jeopardy that we could write into it, so we abandoned it and went to work on an alien, sci-fi idea, which is still in progress, but then something clicked and we realised the boredom of eternity and the existential aspects of the ghosts idea was unique. The stories could be really petty! We realised it was a house-share sitcom - and as soon as you stop thinking about those kind of major drama stakes, you unlock a story that is really domestic and petty.

Laurence: All of those house-share sitcoms contain people that are in a situation they are stuck in. Ghosts is the ultimate version of that, they are stuck together for hundreds of years and none of them can leave. Then we realised by having the Mike and Alison characters that they then bring the stakes, the worries about money, life and everything you need for a story.

What’s it like when you’re all in a room, writing and discussing ideas? Is someone doing the talking and someone else writing? 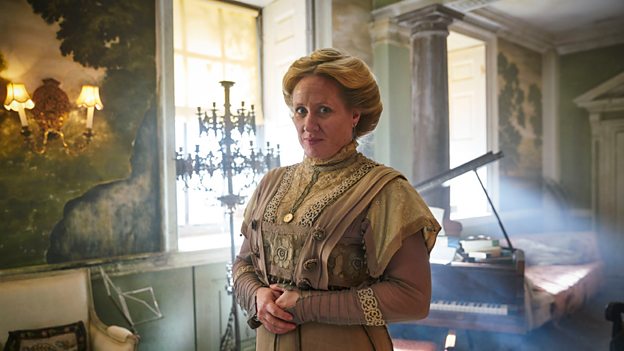 Ben Willbond: We have round-table meetings. Sometimes it’s quite hard because there’s a lot to get through, but I think we’re in a really good place now - it’s delightful to sit around a table and come up with stories and characters.

Laurence: We’d always done that with Yonderland. Everything starts around the table and we’d get to a point of developing characters and individual jokes. Then we’d work out who had particularly latched on to a specific story and they would go away and write that up - some would write solo, some would write in duos. Then when we’d drafted it up, we’d take it back to the table and read it together and everyone would discuss ideas and comments.

Matthew: It’s a writers’ room to some extent, it’s almost arbitrary who’s name ends up on which episode. As Larry said, before we even go away to write it we’d have whole chunks of dialogue already. You’re armed with a bag of tricks already - and then it comes back to everyone at the end and there are rewrites. There’s so much cross-pollination. You sort of forget who came up with what really.

Laurence: We have so many views of the script that by the time we send them off we're certain we've done our homework, that it’s all rigid. But that means that you can play around with it on the day. It's always dangerous to rely on improvisation to save something that’s not quite there - we never do that, but we do allow ourselves some looseness.

Can you talk us through the different ghosts and how you decided who would be best suited to whom? 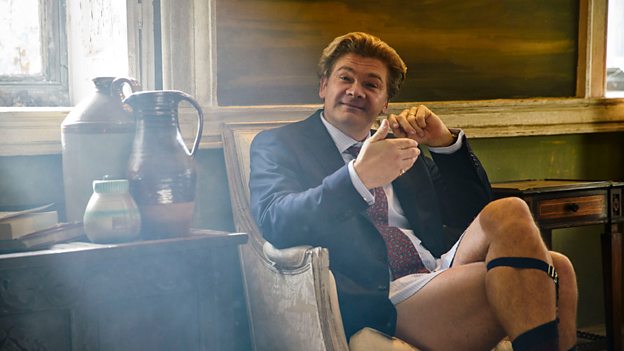 Simon Farnaby (pictured): That’s quite an easy one - I’ve got the best legs so I get to go in pants!

Jim Howick: I suppose there’s a part of each ghost within us, subconsciously.

Mathew: Who’s that most offensive to?

Laurence: Probably me! I think that’s a thing we’ve found in everything we’ve done to a degree. You start writing a character and within a few lines you kind of have an idea in your head of who it might be for. Normally when we compare notes we’ve all reached the same conclusion. Then with any left over we have to work out who’s best to play them. Or sometimes when there’s three characters there and they all feel like Simon, for example, so you have to give one of them to someone else and work out how that will work.

Matthew: We were thinking along the lines of classic, archetypal ghost figures, but also what was coming very easily was lots of more surprising ones, modern ones, like Jim’s and Simon’s. But it felt good to have the real classic ones in there, like Martha’s - the Edwardian matriarch. In the same way, having the headless one: it felt like we had to have enough of those clear archetypes to allow for the others.

As Jim said, there’s a bit of us in all of them, mine’s a bit of a prick! The failed songwriter in me is very much there as Thomas the failed poet.

Is one of the ghosts the leader? 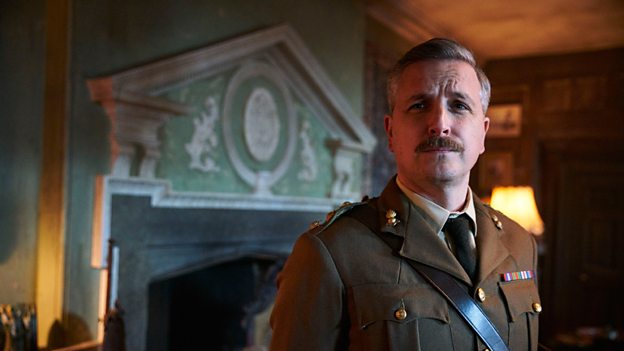 Ben Willbond (pictured): The captain thinks that he is the leader because he’s a military man. But he’s absolutely not in charge. He thinks he is but he’s not.

Matthew: One of the themes of the show is that it’s all about antagonism. You don’t want just one high-status character, you want two or three to clash. Lady Button is also a leader in a way, she’s a guardian of the high-status family line.

Jim: And then you have Robin, who is the joker of the pack. He has been there the longest so it gives him a sort of status over everyone, but then sometimes he just doesn’t care.

Laurence: He’s realised that nothing matters. We did think it was funny that whenever you see a ghost, they’re from the 1500s up to World War Two. They are never any later and never any earlier. Why do you never see a caveman? So we thought we’d have a caveman. If ghosts are a thing, why does it always start around 1490? We thought we’d have one that’s been knocking around for thousands of years.

How the caveman speaks is interesting… 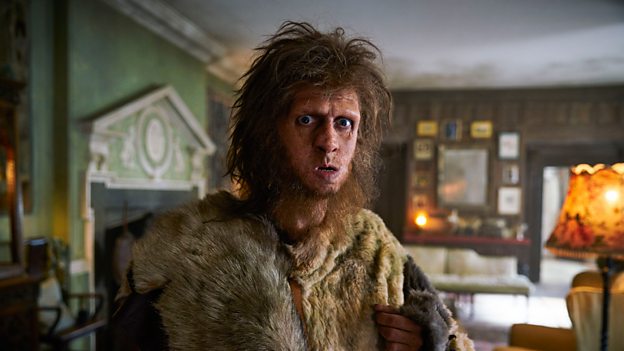 Laurence: The rationale we have for it, is over the years the caveman has seen so many things that he’s actually incredibly knowledgeable but the speech section of his brain has never fully developed. He sees a lot but has trouble articulating himself so he’s like an old wise sage, but almost put through the filter of a dog!

He can’t quite articulate what he wants to say, which he finds frustrating - that informs his character as well. In some ways he’s very wise and thoughtful, but then he’ll attack! You can take the boy out of the cave, but…

Is there physical comedy in this? 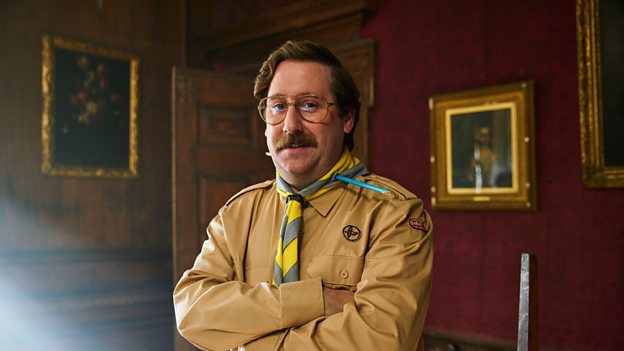 Laurence: There’s very physical comedy in the episode where you see how Jim met his demise. There’s some great stuff there.

Matthew: It is a comedy, we promise!

Jim: It’s the only flashback we see of one of the ghosts’ demise, but we do learn about others. With Martha’s character, we learn about her death in the first episode. We learn about Mary’s death as well. Mary is played by Katy Wix and she was burnt at the stake.

Simon: With the physical stuff there is a different dimension as well, because we can go through walls and look into rooms that you wouldn’t ordinarily be able to.

Matthew: One of the most fun things was discovering a language that’s really unique to this show that we could play with. That involved cutting between the perspectives of seeing and hearing the ghosts in the room, and the physical plane in which they don’t exist and you can’t hear them. You can play with that language. You’d have scenes where Alison is dealing with having a couple of ghosts behind her and she physically responds to that – and then you see it from the perspective of a living person who can’t see who she’s talking to, she’s just shouted at empty space! She then has to find a way to make herself seem remotely sane and cover those moments and that language begins in episode one.

Simon: You can invade people’s space if you are a ghost, there’s no reason why you can’t get in somebody’s face. They can’t see it!

Laurence: It’s a real trial for some of the actors!

Matthew: The guy playing Toby Nightingale (Rory Fleck Byrne) – he had to try and do that scene again and again with me shouting in his face.

Martha: Sophie (Thompson) was asking, “Martha can I see you?” “No, no I can’t see you!” They’re all written into the script but the reality is that you can play the scenes entirely with the ghosts in the room and entirely without – and then there’s freedom in the edit to play with that.

Matthew: Charlotte’s been incredible. She’s held in her head everything that she’s done when we’re around… and then we all clear off she has to retain everything we’ve done and play it again.

Laurence: It’s brilliant. It’s also so weird to watch. She pauses in the middle of sentences and looks at things that aren’t there.