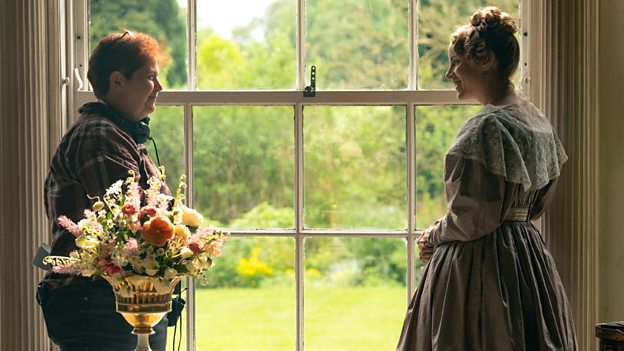 Her life was for living and she really engaged with the world. She lived an extraordinary, packed life and wrote about it all so comprehensively.Sally Wainwright

There’s so much to say about Anne Lister - it’s difficult to know where to start.

She inherited Shibden Hall when she was 35, in 1826, and took on a very hands-on management of the estate.

She’s primarily famous for being a prolific diarist but she was also an openly gay woman in a world where gay women were invisible. Back then, male homosexuality was illegal but female homosexuality wasn’t because it just didn’t exist as far as most people were concerned.

Tell us about Anne Lister’s diaries

We know that she bought really good quality books to write in and had a very healthy sense of her self-worth, which I love about her and is why I think she’s so inspiring. I like to think that she knew how important she was going to be, but you also worry that she might be upset if we read these intimate things that she didn’t want other people to see.

She wrote in code because what she was doing could be regarded as criminal. I suppose the interesting question is why do you write it down if it was regarded as criminal, why do you provide evidence of what you’ve done? For me it comes back to the idea that she was an extraordinary human being and she must have had some idea that her life was important and worthy of that documentation. I think it’s fascinating that anyone creates a code to write in and sticks to it over such a long period of time, over so many years.

For a long time I couldn’t imagine who would be Anne Lister because in my mind she’s just this epic, epic woman and I couldn’t imagine who could ever bring enough to it. Suranne came in to read and she just blew me away right from the start. It was clear she’d thought about it a lot and there was something special about her energy. So by the time we had started filming it felt very well formed because Suranne had put a huge amount of work in. I think she has captured something really extraordinary; all of Anne Lister’s passion for life, the humour, her physical energy.

As well as having this phenomenal intelligence, Anne Lister was also extraordinarily physically fit and must have walked ten miles a day easily. She was very hands-on on her own estate and walked around much of it. She’d walk back and forth to see Ann Walker several times day at Lightcliffe, which was about  four miles away. She was a real force of nature and I think that is something which Suranne has really got her head around and captures. I’ve never seen Anne Lister, I’ve never been able to see Anne Lister in my mind’s eye so I really needed someone to come along and say 'this is it' and Suranne kind of did that. I was so delighted with what she brought to the role.

God, it was really emotional. I felt I was so lucky to be there and to be the person who got to do this. It was a magical thing to be able to do; to be a part of that house and its atmosphere and try to bring that to screen with such an extraordinary cast. What Suranne brought to that character was just monumental; it was epic. I think she was worthy of Anne Lister and Anne Lister was worthy of her, it was amazing.

What do you hope audiences will make of the series?

I hope they feel entertained, I hope they meet a character who they’ll be glad has come into their lives.