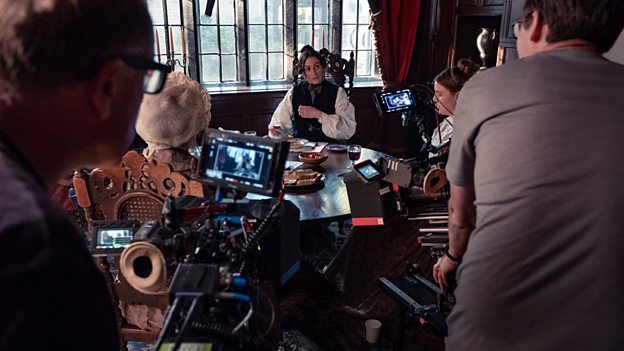 From the production team

On the Gentleman Jack series

When I first read episode one of Sally’s scripts I was blown away by the character of Anne Lister on the page. Sally captured her energy, her charisma, her power, her mischief, her playfulness, it was all there. I got to the end of the script and I saw that a new iconic character for television had been born. It was one of the most exciting reads of my life.

It’s such a thrill to work with Sally, she’s such an extraordinary writer and director. To work with her on a piece that’s been so important and significant to her has been a joy. To be able to go on the journey with her bringing this story to screen and taking it to a global audience has been wonderful. Sally has been the most extraordinary writer, but she’s really proved herself as a film maker now and seeing what she’s been able to do as a director with the more epic, more cinematic elements of this show has been great.

On Suranne Jones as Anne Lister

I think it’s a bravura performance from Suranne. I think she’s been amazing on screen in everything she’s done before this but I think this really shows her as an extraordinary powerhouse of a performer. I think the audience can’t fail to love her, she’s magnetic on screen and it’s iconic. We’re seeing an iconic character being created and it’s really exciting.

What I think Sophie has really drawn out is a woman who finds herself, through her friendship with Anne Lister, coming to understand the importance of self-belief, and discovering her own strength. Sophie tells that story beautifully and perfectly. The really interesting thing about Sophie is that so much of what she’s doing is subtle and nuanced and the camera just finds it. When you look at scenes between the two of them, Sophie is always doing something with her eyes or her smile or little looks; it’s all there and it’s perfectly done.

How will the story appeal to a modern audience?

I think Anne Lister’s time as a person is now. I feel if she were alive in the 21st Century she would be having a blast; this is her era. I think the idea of bringing her to life now and seeing what she was doing almost 200 years ago is extraordinary and so exciting. As a viewer, I really love dramas that show me powerful women who challenge their social norms and that’s what Anne Lister does through and through.

I loved the idea of Anne being an oddity in her time, but because she was so impressive, smart and generally very confident and able to exist in all these different spheres, she managed to get away with it. I love the ‘living in plain sight’ way that she went about things.

Working with Sally has been really inspiring, she’s got such a vision for how the show should be and it’s been really wonderful to experience that. Watching her write and then take it onto the floor and direct it is something I’ve never experienced. I’ve never worked with a writer/director before who works like this and there are moments in the script that I’ve loved but haven’t quite fathomed what Sally was going to do with them and seeing them translate on the floor has been really impressive.

How is Gentleman Jack different to other period dramas?

It has a central character that really pops out of the screen, but what’s so brilliant about Anne is that she really popped out of her own world anyway; so it’s not just a creation of the drama, this woman was actually like that, she actually did do these things. The way Sally has written and directed it has so much truth to it and is so much in keeping with Anne Lister; she’s achieved a balance of it being very authentic, but also feeling very original. It’s also a big gay love story, which you don’t see in period drama very often.

She brought so much to the part and I think she has really delivered on all the complex layers that inhabit Anne. She has brought an edge and brittleness, a brilliant sense of humour and an extreme warmth at the same time. Suranne has told the story of a woman who is having to present to the world that she is strong and capable and that these things don’t bother her, but at the same time she gives her such vulnerability. There are moments where she’s with Sophie and your heart breaks for Anne because you’re longing for her to achieve this quest to find to a wife, to find a partner, to find someone who she can be happy with. I think Suranne has taken it to the next level.

Tell us about the series

It’s written by the marvellous, much lauded and brilliant Sally Wainwright. It’s been a real passion project for her; she’s been looking at this for a good 15-20 years, since she first came across Anne Lister.

I hope people will be able to come away from the series and look at the diaries and the story of Anne Lister and she’ll get the recognition that she always should have had. I feel really excited that this is the story we’re telling right now, it feels so relevant, it feels so bang up to date. I’m dying to see what people think and I hope that they are as excited as me.