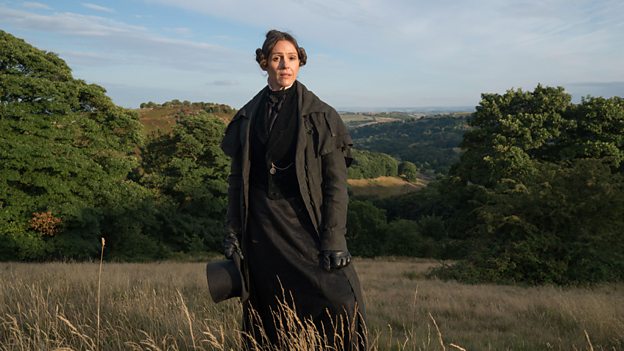 She’s full of determination and has an utter joy within her, but sometimes life doesn't let her have what she needs in order to be the person she wants to be.Suranne Jones

Anne Lister was a diarist, a lesbian, a traveller, an entrepreneur, a self-educator and an all-round brilliant woman. She was born in 1791 in Halifax, Yorkshire and is full of energy - more energy than she knows what to do with. She’s full of determination and has an utter joy within her, but sometimes life doesn't let her have what she needs in order to be the person she wants to be. Above all she is courageous, and that’s what I love about her.

It still blows my mind when I say that we filmed at Shibden. So when I’m walking in Anne Lister’s footsteps, I am literally walking into her house, up her stairs, eating in her dining room, doing business deals where she did business deals, surveying the same land, and walking where she walked. Sally has taken the diaries and, because Sally is such a brilliant storyteller, she’s married this arc over eight episodes and has managed to give us this human adventure and this human thrill. The two of them - Sally Wainwright and Anne Lister together - is just pure gold.

I’ve made a decision that I want to go after roles like this more than I do the ones that kind of steal your soul a little bit. You give your soul to roles like this and you fight for the character in a way because there’s a cause to it all, and those are the roles I want more of in the future.

Tell us about Anne Lister’s diaries

She writes about the economy, social change, social climate, Halifax, her business adventures; she’s a landowner, so she writes a lot about her tenants and her day-to-day business. Sometimes she also writes in a crypt hand. The secret parts are the bits that she didn’t want anyone to know about, things that she doesn't want anyone to see - financial matters, personal matters and of course her lovers, her sexual adventures and anyone that she wanted to gossip about.

She’s an actual person in our history and it’s amazing that we don’t know more about her, but that’s the beauty of what we’re doing and why it’s so relevant now because she was hidden away. It’s taken Sally 20 years to get to this point and it feels right. Now we get the chance to celebrate her.

When is the series set?

Sally chose 1832 onwards because the relationship between Anne Lister and Ann Walker interests her most out of all of Anne Lister’s relationships. By 41, Anne Lister had found a certain armour, a way of dressing and presenting herself. Even though she wasn’t out as a lesbian, she had found a way to navigate her relationships in quite confidently, under the radar of society. She knew that she was different and was happy knowing that. She was an oddity, certainly in her own town, she was a curiosity to be stared at and people were frightened of her. People would ridicule her, she had the nickname 'Gentleman Jack' because of how she looked and the rumours of what she did with women around the area. When she comes back from Hastings, from yet another failed relationship and meets Ann Walker, Sally had the way in to a story which could build her back up and we could really cheer her on, which is what I feel we do. I think the story is really life affirming.

She knows everyone’s names on set, says please and thank you and appreciates everybody which sets the standard. Her notes are always so on point and she just makes me perform better; I strive to be better when I’m working with Sally.

How will Gentleman Jack appeal to audiences?

I hope our audiences will see this as a really modern period drama, which sounds odd to say, not only because of the story of the lovers but because we’ve got a woman in a man’s world who presents herself in a way that she wants to present herself and doesn’t conform to the norms of society.

The series is funny because it’s created by Sally Wainwright and she always finds fun and emotion in human stories. I think period drama can sometimes lack that because we tailor them to what world we think should be created by looking at a painting; but Sally doesn't do that, she puts modern feelings in people. Me and Sophie have tried to find what our characters are like when they’re just together, when they’re just hanging out being girlfriends, what they are really like when the corsets are loosened. I hope audiences will love that.