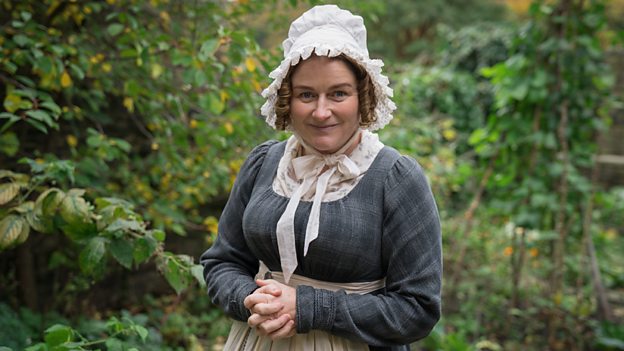 On the story of Gentleman Jack

Gentleman Jack is an epic period drama set in the 1830s in Yorkshire, primarily around the Shibden estate which is owned by Anne Lister who lives there with her Aunt, father, sister and a crew of servants. She’s like a whirlwind and brings drama and chaos into the house on a daily basis. Shibden is a little world in itself; everyone orbits around Anne, dealing with her and reacting to her life. Of course there’s another world as well, Ann Walker’s life and Ann Walker’s world, but my character is very much in the Anne Lister world.

My character is Eliza Cordingley, who has worked for Anne Lister for years. She initially was her ladies maid who travelled the world with her but is now back at Shibden as a housekeeper; so she is now semi-promoted and is running the house. The house doesn't run to Anne’s standards when she is away, it’s a bit shabby and a bit chaotic, and my character’s probably not the most efficient and brilliant housekeeper, but she runs it well and she’s got a loyal team of staff who she gets on with.

The art department have done such an incredible job, everything has been considered and thought about, from the spoons on the table to the tapestries, it’s stunning. The detail of that period world has been combined with characters that we can all relate to. The series shows that we’re all still pretty much the same, nothing has changed that much and we’re all essentially very similar.

She’s a brilliant director. She obviously knows her work so well and knows exactly what she wants from her actors. Every scene is directed in minute detail and she gives you ideas that you might not have thought of yourself. She’s brilliant.

On the story of Gentleman Jack

The series is about Anne Lister, who was known around Halifax as Gentleman Jack. She was a diarist, a land owner, an entrepreneur and an all-round extraordinary woman. She was like a whirlwind through Halifax in the early 1800s and the series is a wonderful retelling of her story.

The series has great humour. Throughout her career Sally has brought passion to every project she’s done, but this one in particular is special to Sally and I think humour is an essential part to that passion.

Jeremy doesn't really understand his daughter, Anne Lister. He loves her and sympathises when things go wrong for her but he doesn't understand that sort of relationship (i.e. between two women). I think Anne respects him but she knows that if the management of the estate was left to him, he’d let people get away with a lot of things which would be expensive and wrong. There’s a bit of an unspoken tension between them.

Tell us about Gentleman Jack

The appeal is that it’s based on a real character who is absolutely fascinating, Anne Lister, who was notorious in her lifetime. She’s wonderfully brave and not at all like the little woman at home who we often see in period dramas.

I play Anne Lister’s aunt who doesn’t have any children of her own. She loves Anne, and she has an intuition for this girl who is tricky, difficult, demanding and unusual. Her aunt is absolutely on her side.

They might initially be a bit surprised because Anne Lister was quite an extraordinary anarchic character, but of course all of these things have been going on forever in different capacities. These days we tend to act as if none of these things have ever happened before. It’s a very human story and quite relevant to the times as well.

Jeremiah owns several pits and works with his brother who is a nasty piece of work and very cut throat. Jeremiah isn’t really like that, he wants to do business but he wants to do it ethically; I think he’s a decent bloke. He becomes a go-between for Christopher’s and Anne Lister’s demands, so he’s pretty much in limbo for the entire series.

Yorkshire is often portrayed in period dramas as either a scruffy and dark pit or large posh estates where everything is nice and amazing. What’s lovely about Gentleman Jack is that I’m playing the Yorkshire lad but his accent is a lot more well-spoken than that. The family have money, the industrial revolution is about to kick off and Yorkshire’s at the centre of all of it in Halifax. It’s got this incredibly forward thinking woman which I think is just brilliant. Yorkshire is something that should be celebrated rather than us constantly being portrayed as scruffy and poor.

Christopher is certainly a villain in this story, but he was also a real person and an extraordinary man. He was disowned by his family when he was 18, went to sea for the East India Company, fought pirates and was celebrated and decorated for it. I keep remembering that when I’m working with Shaun, who plays my younger brother, and asks: “Why is he so dominant?” I say: “Because I’ve killed pirates.” When he came back and he was reinstated by his family and turned his family’s small business into Rawson’s bank and owned pretty much all of Halifax.

Even though it’s a period piece it plays with the idiom of the genre. Anne looks down the lens which gives the series a quirk and an energy that stops it from feeling like another of those dramas in which women wear corsets and men wear ridiculous wigs.

There’s a big story in all of her dramas but I think people will love it for the characters, their humanity, and seeing how similar we are to the past in many cases; people haven’t really changed that much. The wit of Suranne’s character and her owning of that lens is also an extraordinary device.

My character is Tom Sowden, who is one of the poorest tenants on Anne Lister’s farm. He works with the pigs in the slaughter houses, raising the animals for slaughter to earn money. He has to deal with his dad, Sam, who is quite an abusive figure alongside dealing with Anne Lister coming on board as their landlord. Two very different worlds. He’s very entrepreneurial, has a lot of ambition and wants to build a better life for his family despite having to deal with his father bringing him down the entire time.

I can’t think of a better time for this period drama to be shown if I’m honest. I think it’s perfect in every way. It’s got such a strong, female lead character and I think if you saw it without knowing Anne Lister was based on a real person you wouldn’t believe she did all the things that she did. It’s just so nice to know that it all came from real life diaries.