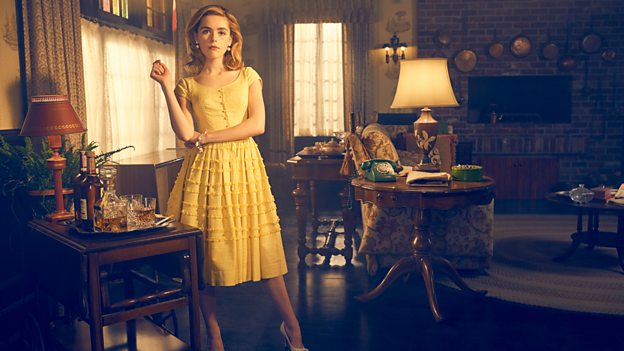 B. D. and her mother had such a complex relationship - it transcends all the abnormal elements of their lives.Kiernan Shipka

How much did you know about the story and the character you play, Bette Davis’ daughter, B. D.?

I’d seen Whatever Happened to Baby Jane? And I’ve been obsessed with the sixties for as long as I can remember, immersed in that world. But I didn’t know much about B.D. or I didn’t know much about their feud and their whole story and kind of the meat of it all, which is why I’m so excited for people to see it because the story is kind of told but at the same time it’s untold.

I read the book that B. D. wrote and I watched all the video footage that I could get my hands on and worked tightly and closely with Susan [Sarandon] and with Ryan [Murphy]. It was just the best experience possible. I mean, when you’re playing a challenging character, a character that requires a lot it’s great to have people by your side. It was just a delightful show to be on.

Is it daunting, playing someone who is still alive?

Yeah. Absolutely. Very daunting - it’s my first time diving into playing someone real. It’s something I’d wanted to do for a while.

B. D. and her mother had such a complex relationship - it transcends all the abnormal elements of their lives. Mother/daughter relationships in general can always be complex and emotional and interesting and heavy, and I think it was kind of just getting to the root of that and kind of looking beyond the fact that Bette is an icon in her own way and everyone in the show is very, very known. I think it was more just kind of getting to the core of who are these - as people what are they feeling kind of thing.

How did the role come about?

I auditioned for the role and soon after I heard that they wanted me to do it and I was like, what, excuse me? I’m one of the type of people that I don’t get my hopes up for a lot of things just because I like to kind of play it cool.

But I was like are you serious? Are you really - are you kidding me? I’m going to be part of this cast? Like I get to be looking at this call sheet and see my name next to these people. No way. I’m going to be nervous walking in the hair and makeup trailer every day! And it was the best.

What was it like working with Ryan Murphy and such an incredible cast?

Oh, my God. It’s so fun. They’re some of the nicest people that I ever worked with. Susan, I worship the ground she walks on. She’s amazing. Working with her was just so insane, such a dream, and I was just so happy with how everything turned out really.

And Ryan is such a champion of women and this is a show that truly proves it in every kind of way.

This is another 1960s period drama for you - what are the similarities with Mad Men and Feud?

I just can never leave the sixties no matter how hard I try!

One thing I’ll note that’s really cool about both Mad Men and Feud: Bette and Joan is that they both kind of portray this other time period but portray women with such depth and emotion and in a way they weren’t treated at that time. So it’s a kind of a cool exploration into a past that almost hasn’t been delved into as deeply as it could have been. So that’s something that I’m really proud to be a part of it.