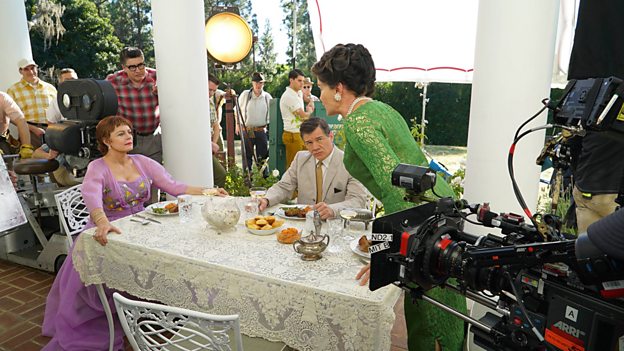 Even though it's set in 1962, the themes and issues in the show are so modern, and women are still going through this sort of stuff today that they went through 50 years ago, and nothing has really changed, and we really wanted to lean into that aspect of the show.Ryan Murphy

Can you tell us how Feud came about?

So I was talking to a lot of women about important themes - sexism, misogyny, gender pay differences, ageism - and I kept thinking, I really want to write about this.

And I also became interested in the idea of doing something about very emotional two-handed feuds, I thought “Wouldn't it be fun to do a TV show every year that is a great two-hander love affair that has fallen apart in some way?” Could be friendship, could be a marriage.

I’d owned a script about the feud between Bette and Joan since 2009 and I was always sort of struggling with that script because we wanted to go deeper into the inner lives of these women.

And then I thought, well, what if I ask Jessica and Susan to turn two hours into eight? And they said yes.

I put a lot of my passion about women’s issues into that show.

How is this story of old-Hollywood relevant today?

Even though it's set in 1962, the themes and issues in the show are so modern, and women are still going through this sort of stuff today that they went through 50 years ago, and nothing has really changed, and we really wanted to lean into that aspect of the show.

What was it like, working with such an incredible cast?

There’s nothing better than movie stars playing movie stars, ever. I just loved doing it because as a fan of pop culture and also as a fan of where TV is going and to have four Oscar winners in my cast is amazing.

All of the people in this show have this sort of magical sparkle to them, this sort of larger-than-life quality.

It’s great honour to be able to write and be inspired by people that you love and say, “I want to work with you, but I want to show you in a different way or maybe challenge you in a different way, and what I'd really love to do”. I really like that collaboration, and many times actors have never been empowered to think that way.

You met Bette Davis right before she died - can you tell us about that?

I’d been writing her since I was ten years old. She wrote me back, and what I loved about her letters to me is they were never like “XO” or “Love,” it would be like “Thanks for the letter, you're sweet, Bette Davis.”

So I became a journalist in high school and college and I kept writing and saying, “I really want to interview you, I have so many questions, I want to meet you”.

When I was about nineteen or twenty, I was a journalist with a syndicated newspaper and her assistant said, “I don't know how much longer she's going to be with us, so why don't you come now?”

She was literally in the last month of her life she finally said, okay, just come and I’ll do an interview with you. I booked a plane ticket and first time I'd ever been to LA, and she was very ill, she'd just had chemo. I was amazed that she gave me as much time as she did. But she liked me because I knew so much about her. She could tell that I came at her with great love.

I spent a long time buying flowers in my little suit, I was very young and nervous, and I opened up - she buzzed me in with no hello or anything and I got out of the elevator and I opened up the door and she was there at the very end of the hallway - she had got dressed up and she wore sort of a pillbox hat and she was enveloped in this cumulus cloud of cigarette smoke. And so she took me in and the first thing she said was, “Do you want to hold my Oscars?,” which I said, “Yes.”

So we put some of them in the show - one of them, she held at night when she watched TV, so the gold flakes had sort of come off.

The 20 minutes turned into a four-hour conversation and she liked me, I think, because I chain-smoked with her (this was in the late '80s) and I had a really wonderful time and I got to really talk to her a lot about her pain and her regret and what it was like to be a woman and feel that you were just getting started and then told you were done. A couple years later, I started to write scripts and I kept thinking I should do something about Bette, but I didn’t know how, and it took me thirty years to figure it out. A lot of that reportage that I couldn't use at the time - a lot of what she said was off the record - I put it into the show. So that was very rewarding.