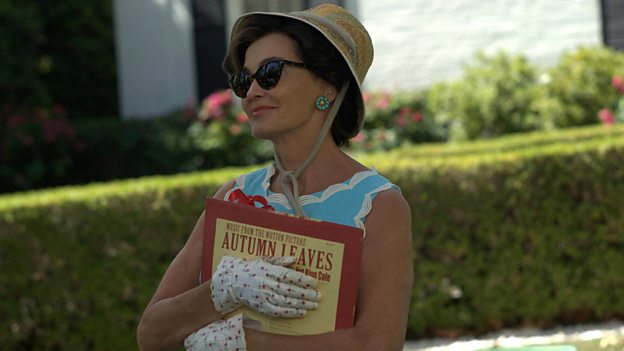 Whether or not it was 100 percent true or whether it was manufactured - the feud was used to promote the making and the end product of the film, Whatever Happened to Baby Jane. And of course, as long as you've got that thing - well, you know, it's like a feeding frenzy with the press and the audience.Jessica Lange

How did you prepare to play Joan Crawford?

Joan Crawford was one of the biggest movie stars of Hollywood’s heyday but I'm the first to admit I knew nothing about her. I'd obviously seen her films because from the time I was a child, I watched old movies on television - that’s how I grew up because in northern Minnesota, there wasn't much else to do!

And then when I actually sat down to start studying her - I read every book and listened to hundreds of hours of interviews and of course watched all her movies. And what fascinated me more than anything was her childhood - her past. I remember saying to Ryan, “I don't know how to play this character, I don't know who she is, and I don't have a clue.” And as soon as I dropped into Lucille LeSueur from San Antonio, Texas, then I had a way into the character.

Once, I found my way in, she became really fascinating to me because there are so many facets to her that I think people don’t really see, because she’s always very guarded. There’s this armour, this creation of Joan Crawford.

Then I really started listening to Joan and studying her voice, that really is the way into a character. There was something very held-in with her - it’s not a stillness that comes from a sense of peace, it’s a stillness that is very controlled.

It really has been one of the most exciting parts I’ve played in a long time.

What made you want to play the part?

I knew that it would provide a lot of opportunity and Ryan Murphy knows me well enough at this point to know what I like to do and what my strong points are as an actor and the kind of part that I gravitate toward. I trust him. I wouldn’t have been involved in television the way I am, I only did that because of him.

One of the themes in the series is roles for women. Do you think much has changed, has television been a boon for women in terms of roles?

I think nine times out of ten, the better roles are actually on television now. Especially for women but maybe across the board.

Twenty years ago it was kind of a stigma in the US to do television - you were either a film actor or a television actor. Now there’s no border anymore which is great because that’s the way it’s always been in England.

The series shows that that Bette and Joan were constantly pitted against each other by the studio but also that the two women persisted to make it work.

Well, I think a lot of it was economics, wasn't it? I mean, as long as they kept that pot boiling, the publicity was there. The more they could kind of generate this idea of these two titans of the star system against one another, then everything fed into it. A lot of it was publicity.

Whether or not it was 100 percent true or whether it was manufactured - the feud was used to promote the making and the end product of the film, Whatever Happened to Baby Jane. And of course, as long as you've got that thing - well, you know, it's like a feeding frenzy with the press and the audience.