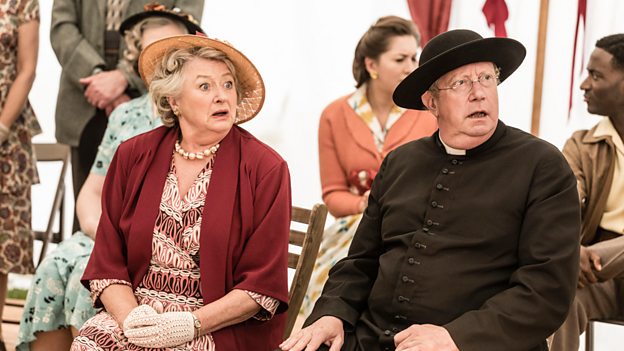 It’s a gloriously nostalgic series. It's cosy crime, the whole family can watch, it’s not offensive. Of course the stunning backdrop of the Cotswolds also helps!Peter Bullock

What can we expect in this new series of Father Brown?

The eighth series sees Father Brown investigate the murder of an eccentric beekeeper, step in when Mrs McCarthy’s family reunion is threatened by a fortune-teller’s predictions and race against time to save Bunty from the hangman’s noose when she is tried for murder.

The Kembleford constabulary sees the return of some familiar faces, Lady Felicia steps in to swell the numbers during the annual choir competition and Sid Carter turns to Father Brown when his girlfriend’s father is framed for the death of a local factory owner.

We have some fantastic guest artists joining us to tell these wonderful stories - amongst them Annabelle Apsion and Pippa Heywood star as feuding neighbours with Nigel Planer as an unscrupulous solicitor; Harriet Thorpe guests as an overbearing Nanny; Niamh Cusack plays Mrs McCarthy’s sister Roisin and Ian Puleston-Davies arrives via canal boat as bargeman Pat Lochlin.

How have you kept the characters and storylines fresh?

Every story takes us into a world we haven’t been before, this year we enter the realms of competitive choirs, the London fashion set and a troupe of travelling jesters. We also try to mix up the groupings with our regular characters putting them in different situations with different characters.  The arrival of Mrs McCarthy’s sister gives us an insight into her past; Bunty meeting a true-love match shows us a different side to her; tender moments with Mallory and his family break his antagonistic character. Beautifully warm insights performed wonderfully by Sorcha, Emer and Jack.

Why do you think Father Brown is so popular?

It’s a gloriously nostalgic series. It's cosy crime, the whole family can watch, it’s not offensive. Of course the stunning backdrop of the Cotswolds also helps!

What locations can be seen in this series?

We’ve been to Kirtlington House in Oxfordshire, Worcester Cathedral, the Cornwell Estate and Upton House. We’ve been to the canals in Cropredy, we have shot round our regular locations in Blockley, which is Kembleford itself. We also shoot in standing sets; the presbytery kitchen and study and police station interior, which is in the studio in Evesham. We do quite a good tour of the Cotswolds in fourteen weeks of filming.

Is Father Brown still riding his bike a lot?

He is. The iconic image of the show is Father Brown with his bike, and Mark loves to cycle so we try to incorporate it into most episodes. One includes Father Brown taking chase on Bucephalus trying to outrun a galloping horse.

How does Mark evolve in the role over the episodes?

The character of Father Brown never really changes and Mark’s performance is so rounded and watertight. He is very protective of that. He never wants it to be a parody or a pastiche. He is constantly asking himself: “What would a 1950s cleric do?” - For writers and directors who come and go through the show, it’s great to have a guardian of the character as strong as him.

Were there any challenges during filming?

There always is. We’re at the mercy of the Great British weather. We’ve had both record temperatures and torrential downpours this summer and because we have a tightly structured filming schedule we have to be creative with re-locating or sometimes tweaking scripts to suit. There are often incidences of the 21st century creeping into 1950’s Kembleford - filming beneath flight paths, contemporary vehicles not being able to be moved, satellite dishes and aerials on buildings etc. But we have a great team of creative technicians that help mask and remove the present day.