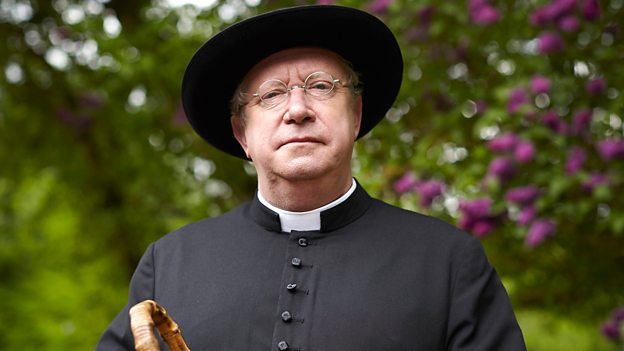 I was once in Cartagena in Spain in a sweet shop and a little girl came up to me and threw her arms around my legs saying: “Father Brown!” That’ll do for me.Mark Williams

What can we expect from Father Brown this series?

We have some great episodes in store. We have an artist who has an obsession with his model, a beekeeper and her rather strange life with an adopted son, and a great big fashion episode which gives a chance for Claire Collins, our brilliant designer, to show off what 1950s couture was like. We have also had a canal episode because the Cotswolds does have a canal through it; in the 1950s there were still boats carrying coal. They are not like cars; you can’t just turn them around so that was quite fun to film! We use Worcester Cathedral for a choir competition and we’ve got a visit of a convention of jesters to the village and things get very dark, and the return of Flambeau, who comes against up some really hard-hitting gangsters.

You have been playing Father Brown since 2012. How does it feel for you to go back in time with no technology?

You mean mobile phones? Not a problem! They had other stuff like jet engines, cars, refrigerators. No shrink wrapped cabbages though!

Why do you think Father Brown has been so successful?

I think it is about storytelling. You are being told a story every episode - and that’s what people love. It’s like reading a comfortable novel. There isn’t a lot of urban anger, or zombies, or dragons. The series are an antidote to what most boxsets are about nowadays.

Did you have any clue about the success of Father Brown when you first started playing the role?

No. We set out to do a good job. The rest is audience taste.

I was once in Cartagena in Spain in a sweet shop and a little girl came up to me and threw her arms around my legs saying: “Father Brown!” That’ll do for me.

What do you most love about playing Father Brown?

He is very interested. He is does not judge people - he is interested in everything, and that makes him interesting. He is not interested in hypocrisy, or complicity, and not interested in people who are locked into their own worlds, as he finds that abhorrent. It is good that he can change delight to anger. He is an open person. The thing I most like about the process is the guests, the actors. You get new people every week and I love watching what they do with the script. Remember it better than me mostly.

Does Father Brown have any faults?

He can be didactic. He is faith-led, which has its own errors. He is greedy. He was always stealing cake in the beginning; maybe we should bring that back!

Have you evolved him over the years in terms of his expressions?

Yes - he is shy. He was brought up with extreme authority, he was in the First World War, so he has to submit sometimes to authority, and he does that without thought initially, but then his intellect takes over. He has two ways of operating with people; one way is when he is interested in connecting with them, and the other one is when he is on the scent of something, he can be brave and forthright in the way he looks and talks to people. At other times he can be evasive and isn’t very good at eye contact. Sometimes he is on guard about the way he presents himself, and sometimes he can’t help it, and almost starts twitching a bit, and sometimes finds it hard not to express his disapproval. Usually one of the things he does, is that he is still, which Chesterton gives an image of but when he moves, he moves very quickly, because he has made a decision. We did a scene the other day when someone runs up the stairs and makes his getaway - I run after him and catch him. When we filmed it the actor said in surprise: “You’re quick aren’t you!”

Is Father Brown a good detective?

Yes. He is like Miss Marple; it is the unimportant which is important, which G.K. Chesterton said himself and I think possibly Agatha Christie took to heart.

What’s the dynamic between Bunty and Father Brown this series?

He is very forgiving of Bunty. She has also come on as a detective. There is an episode this season where he gets pretty short with her, because she is short-sighted about something, and he fails to change her mind. He can see the fact she is being prejudiced and pre-judging something.

Did you read the books before playing the role?

I had read The Blue Cross - the first episode of the birth of his character, which is an exemplary introduction of a character as you don’t think he is the hero at all until quite a way into it.

We heard you requested to ride your bike a lot this series, and that you chase a horse on it. How was that?

He was only cantering. I could have caught him - I nearly did.