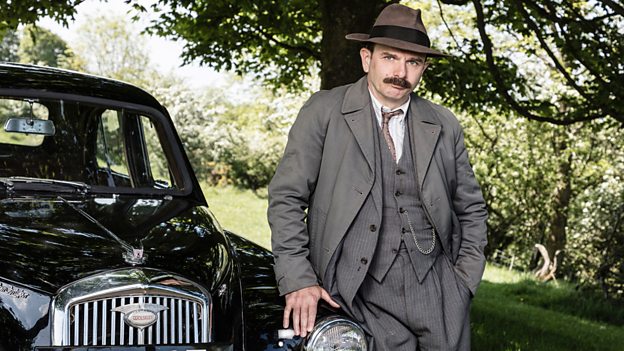 To look at it, it is a nostalgic view of the world - but actually it is our own little colourful world that we can twist and turn to the way we want to.Jack Deam

What can we expect to see between Mallory and Father Brown this series?

It plays on the usual themes but is very different at the same time. Much has gone on in previous series, animosity, respect or disrespect, but we have this thing where we are in the same day in 1953 constantly. Anything that does happen resets for the next episode, there is no hangover like there would be in a normal series. Anything that happened; you don’t need to remember it. I just start at the same point again. It is refreshing in a way as you don’t have to think constantly think: “Can I do this because I did that on the previous episode?”

What is it you really enjoy about playing Inspector Mallory?

I can just get to be grumpy all day. I can wake up in the morning and just say; “Can’t be bothered today”, turn up and then use that right the way through the day. When you play characters that are like that its true what everyone says, the baddie or the grumpy characters are far more entertaining to play. You get a much broader scope than you would on anything else. This kind of lends itself to almost like a comic strip, so rather than a real reality we have created our own reality within the 1950s. To look at it, it is a nostalgic view of the world - but actually it is our own little colourful world that we can twist and turn to the way we want to.

This is your fifth series on Father Brown - do you feel already at home with the rest of the crew, and with your character?

Straight away pretty much when I came in. It is always difficult when you first come in to something, because you know previous things have had a different take on the detective, and also a different take on the relationship with Father Brown so there is much more of a loggerhead. That’s kind of how we get away with more comedy and more slapstick humour as well as the antagonistic relationship that develops. I can look back at the first series I did and ask myself why I did that, but it was because the character was still in development. With television now you don’t get rehearsals; you turn up and hit the ground running. We know it as jobbing actors who have all been around, so what you tend to do is understand that, and that helps. You try to make instant working relationships, to make it easier for you to go broad, go safe in your performance.

Does Mallory have any redeeming features?

I think so. You just don’t get to see them very often. There are little touches every now and then that sort of creep in. Because even though you do try and push him into a bigger caricature, he doesn’t really work as a policeman, so you have to do find out what will make him work as a policeman and everything else flies off from that. He is much more of a vessel to make stories work, then you kind of hide in that. That’s what makes him interesting, it lets you do what-ever you want with him. You can use him to be a fall guy of the story, the person throwing the stories you are in you can make him much more human every now and again which comes as a surprise. His family give more of a tell-tale sign as to why he is how he is. You start playing with realities of the world, the made-up world of Kembleford, but there are lines that are crossed

Do they reach an understanding? Could they ever be friends?

I don’t know. Not friends - I think there is always a respect between them, but the respect is borne of results rather than any sort of mutual understanding. Where Father Brown has forgiveness and salvation as his core motive, mine is just crime and punishment. I’m the ‘this world’, and he is the next, for being judged.

Do you enjoy getting into costume?

Everyone on the costume team are amazing. Every time you turn up and see people walk in, you meet them in the morning with them dressed in contemporary civvies, and then thirty minutes later it’s like stars in their eyes and somebody comes out dressed completely differently. With Mallory we kind of wanted to keep him constant - again it’s that cross from what would be the real, and the comic strip element. I’ve worn the costume from day one and the only thing that has changed has been his shirts and ties.

Have you got a favourite episode of this series?

Because the series is back to back (more people are watching it like that), for me it becomes much more about the whole collective of the series rather than a single episode, it is almost like having a whole album rather than a single. For me this feels it gets better; they do evolve. You get new writers involved, and little tweaks here and there and it does change it. I’ve liked them all but for different reasons.

Are there any tender moments with Mallory in this series?

There are a few, yes. But it is kind of reserved for the absolute necessity of making himself look human. He is not too bothered with it all.

Do you think you would make a good detective?

My wife says that I think I am a detective. Before this I was doing DCI Banks also doing detective work, and you do get drawn into it; when you are investigating the scripts you are looking for plot holes, what you should notice what you shouldn’t notice. It’s all in there on the page but then when you are watching series like Making A Murderer, or Stairway or true life crime programmes and get to know what is going on, you try to solve them yourself.

What would you say to viewers who haven’t watched Father Brown?

I would say if anyone that likes the detectives with a dash of colour, and a sprinkle of humour and all the rest of it then this is the one for them. It’s a lot more light-hearted and tongue-in-cheek look at the world, and is nostalgic, colourful and hopefully funny, entertaining, with a bit of joy in there as well. That’s what I love about this job - that we don’t have to delve into the darker elements of what you usually would do with detective and police dramas. We get to skirt that and enjoy ourselves.