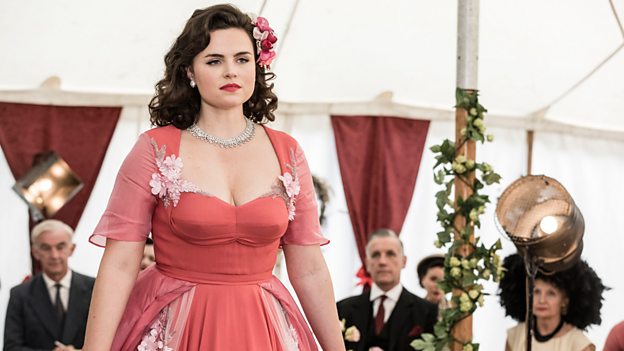 I love Bunty! She is really outspoken, brave, and always bold. She can be selfish and will often do the wrong thing, but mostly for the right reasons.Emer Kenny

Why do you think the character of Bunty is so popular?

Bunty will always pick the most exciting, slightly dangerous option, especially if it will annoy her parents. At the same time she has got great morals and a lot of heart, which is what she has found with Father Brown and Mrs M. They’ve become a new family for her.

How do you enjoy playing the character?

I love Bunty! She is really outspoken, brave, and always bold. She can be selfish and will often do the wrong thing, but mostly for the right reasons.

The fashion and the cars are amazing. Obviously, women’s rights were less so.

Can you tell us about the trial Bunty has coming up this season?

This is a really great episode written by Dominique Malony and directed by Darcia Martin. Bunty goes to a Gatsby-themed party hosted by a playboy millionaire. He, unfortunately for him, gets murdered at the party and its thought that Bunty has a hand in it, so she ends up going on trial. It’s a brilliant episode as there is something very real at stake for Father Brown; his friend is in the dock and she could be found guilty. In the 1950s you could still be hanged for murder; so there’s the possibility that Bunty could die. There are always moments like that in this show that make me think of the very stark difference between living then and living now.

Mark is very, very funny; he has such a brilliant mind and has totally made Father Brown his own: Modern, eccentric and loveable. He’s a great leader for the show, and never stops with the positive energy that you need when you are doing ten episodes.

Could there be some love in the air for Bunty this series?

She meets a fashion photographer who seems like the male Bunty - fun-loving; he drinks, gambles, and womanises. They meet their match in each other. You will have to watch the series to find out what happens…

What’s the dynamic with Bunty and her Aunt?

It’s really nice when we have Nancy and Sorcha and I all together in episodes, to be a trio of women and to play the comedy of our differences. This series Felicia is back in Kembleford when Mrs M is taking her choir to a competition. Bunty is a terrible singer, but Felicia is wonderful so she gets roped into singing and Bunty has to support.

What’s it like playing a character with such an extensive wardrobe?

Bunty has an enormous wardrobe. She often dresses by theme. We have ‘Hunty Bunty’ where she wears tweed and boots - her horse-riding in the countryside look. Then she has a ‘Sporty Bunty’ look which is more tomboyish, with trousers, sweaters, stripes - often when I’m driving. She also has a whole host of more feminine/glamorous dresses. We’ve got an episode this series where a fashion crowd come to Kembleford, so we had get on the heels and the diamonds.

Are you doing lots of driving?

Yes - we have lots of stunts to do. In the murder trial episode, there is a stunt with a car crash where she thinks she has killed someone. I do all the driving, so I’m used to it now. On my first ever day of filming Father Brown, my first ever scene, it was a hill start in a 1930s car… which was… interesting!