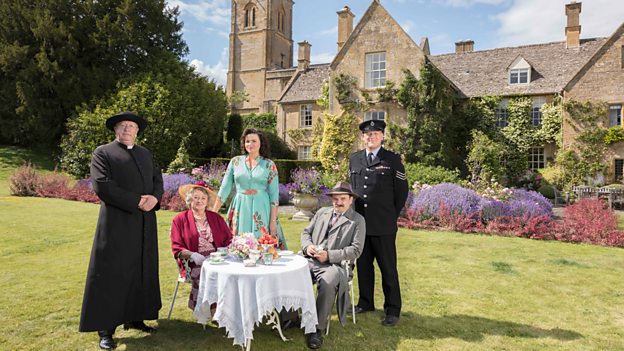 BBC daytime viewers will already be looking forward to the eighth series of Father Brown, due early in the New Year.Dan McGolpin

Mark Williams (Harry Potter) resumes his role as the crime busting charismatic priest in the Cotswolds. Based on the character made famous from GK Chesterton’s short stories, the eighth series sees Father Brown investigate the murder of an eccentric beekeeper, step in when Mrs McCarthy’s family reunion is threatened by a fortune-teller’s predictions and race against time to save Bunty from the hangman’s noose when she is tried for murder.

Peter Bullock, Producer, BBC Studios, says: "This eighth series promises to keep viewers enthralled with ten new whodunits to solve. Set against the backdrop of the stunning Cotswolds countryside these gloriously nostalgic episodes are full of drama, warmth and humour and feature a fantastic roster of familiar faces returning to Kembleford along with a wealth of brilliant guest appearances. For me, Father Brown continues to go from strength to strength."

Dan McGolpin, Controller BBC Programming and iPlayer, says: “BBC daytime viewers will already be looking forward to the eighth series of Father Brown, due early in the New Year. They won’t be disappointed with ten fantastic new stories and the return of some well-loved characters in addition to new guest appearances and of course the wonderfully talented regular cast.”

The combination of detective drama shot in idyllic English countryside has proved to be very appealing to audiences around the world. To date Father Brown has been sold to over 200 territories. In the UK, series seven averaged 1.8m viewers with a 26% share of the audience, winning its timeslot.

A ninth series of Father Brown has already been commissioned and will be broadcast on BBC One and BBC iPlayer in 2021. Both series eight and nine are produced by the BBC Studios Daytime Drama Unit in Birmingham and were greenlit earlier in 2019 by Dan McGolpin for BBC One daytime. The Script Producer is Neil Irvine, the Producer is Peter Bullock and the Executive Producer is Will Trotter.