A new thriller from David Wolstencroft for BBC One 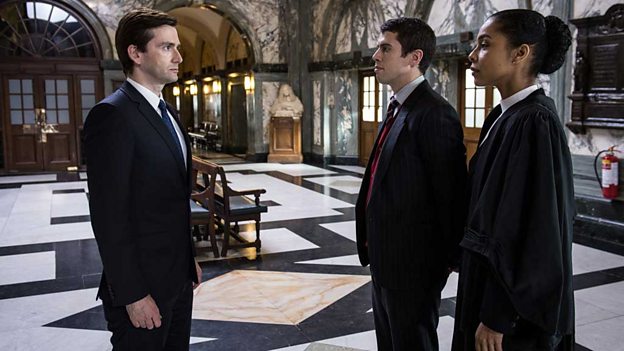 Why did you choose ‘The Escape Artist’ as the title?

Titles just materialise. When I created Spooks, that title was literally the first thing I wrote, at the top of the notepad. It was exactly the same with The Escape Artist. I knew I wanted to write a legal drama that had aspects of a Hitchcockian thriller to it. Something that didn’t go the usual way these types of stories can go, I wanted to give it an air of mystery and menace.

Can you tell us what makes this crime drama different?

There’s a tendency with legal stories to get caught up in the intellectual side of things rather than the emotional underbelly. I wanted to do something that from the gut rather than something that was about the ins and outs of the law, although this does of course involve that but I tried to frame it in a different way.

Can you tell us about the character of Will?

Will is the master of the machine that is the legal system. I wanted to write a story about someone who gets out of that machine and is promptly run over by it. I’ve had personal experiences with legal process both here and in America, and all of those experiences have resulted in me thinking deep, raw, primal thoughts. You’re dealing with these spectacularly complex legal concepts, having these meetings that are full of legal gibberish, and yet the overall feeling for me was one of boiling fury. I was like a caged animal, and so I wanted to put that into this story of a criminal barrister.

How important are Will’s family to his journey?

Our private life often tells a more truthful story about ourselves that the one we project professionally. Will’s world - his marriage, his relationship with his son, is paramount in this story. It helps us identify with him. I don’t imagine I could be a lawyer or do what Will does, but he’s committed to his family, and that’s something I relate to very much. I think that creates a powerful emotional connection.

Did you have casting in mind when writing?

I rarely have anyone in mind when I write because I think that sometimes limits the character. In any case the right actor will also bring their own stuff to it. I have been very lucky in that David Tennant does just inhabit the part completely.

Ashley and David had worked together before, that must have helped in terms of casting?

I was so excited when we were talking about Ashley joining the cast as I’ve long admired her work in Ugly Betty and in Extras. I knew that working with them both was going to be a lot of fun because they’ve got a short hand together.

Could you tell us a bit about the part of Maggie played by Sophie Okonedo?

I think Will, Maggie and Foyle all share an element of the psychopath about them. What I love about Maggie and what Sophie has done with the character is she gives the impression that she would truly stop at nothing in order to succeed - but she never does go that far, she’s a brilliant lawyer.

How did you feel about Toby Kebbell being cast as Foyle?

I was blown away by what Toby did. He was like a de-tuned television walking around the set. Deeply unsettling. The scenes between Foyle and Eileen especially. Those scenes really are messed up. When I wrote them I had an image in my mind on just how dark it would be but they went completely into the basement.

Was the character of Foyle based on any real-life criminals?

No, but I think he evolved out of the need for him to be in the script. In as much as I wanted him to be as engaging a nemesis as possible. He needed to be intelligent and manipulative a classic villain. I also wanted him to have an emotional response, he stays very much true to what he believes in, even as a psychopath he goes into very dark hellish places but he still stands up for what he believes in, in a horrible way. He’s a man of honour, perversely, but the wires are all jumbled.

How did you put the twists and turns of the story together?

I did what I always do – I wrote myself into a corner and waited to see what happened. Will helped me get there, by that stage I knew him and although it sounds weird he sort of helped me do that.

Are there hints that Foyle and Will could have swapped places?

There are a lot of mirror scenes in the script to make that point. Brian (Welsh) does a great job in showing it using reflections in people’s glasses, mirrors on walls etc. That’s part of what I think the ambition has always been, to show reflections between the characters, showing their similarities. There are a lot of ways to approach the show that aren’t just about who done it and how.

Why did you choose television rather than film to tell the story?

I’m a TV addict. I grew up with the big event series like Cracker, House Of Cards, Edge Of Darkness. And the bar keeps being raised, which speaking personally as a writer I respond to very much. Look at something like Sherlock, and the way they tell stories on that show. I think television does allow you to inhabit a world in a way film doesn’t. I also wanted this to return. The BBC have been really supportive in that regard, they really got it from the beginning and we all wanted to make the same thing so it seemed like a perfect fit.