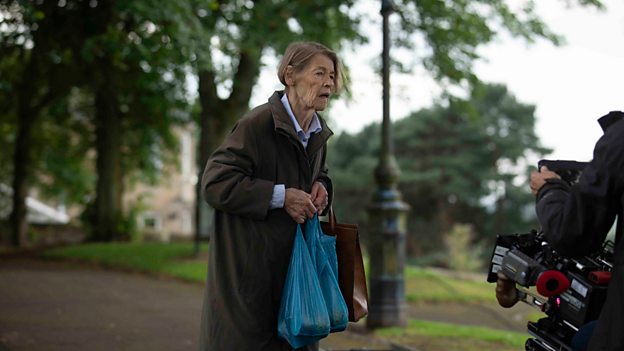 I am hoping people who watch this journey realise that dementia is not just old age, but the fracturing of a mind. That is what dementia is, and I think more help should be given to people with dementia.Andrea Gibb

What drew you to this project?

I was sent the unpublished manuscript in 2013. Claire Armspach, STV Productions’ script executive had found the book, so it’s really all down to her. I had written about dementia before and my grandad had dementia, so I was very much personally involved in the whole subject. I read the book and I was just completely knocked out by it, it’s a beautiful piece of writing. Emma, the author, wasn’t very old when she wrote the book, and it was her first book. And yet she’s got in the head of the character with this condition and has managed to make us understand what it must feel like to have it. So, I was drawn to it because of its emotional heart, because it was such an amazing character that you don’t see on screen very often and because I felt it had something to say.

It was a hard one to be honest. The wonderful thing about a book is that you are taken inside the head of a character, a book is a very internalised experience. Your relationship as a reader with a book is very different to your relationship as an audience member with something that’s on the screen. Because watching something on the screen, you’re slightly removed from it. When you’re reading a book you’re right inside the book, you’re sort of running your own film if you like, in your own head. You’re making your own choices and your own decisions. So, as an adapter coming to a book, I have to make those choices and hope that actually they’re going to work for an audience, rather than necessarily for a reader. One of the things about Maud, in the book, she’s an unreliable narrator. So, everything is seen from Maud’s point of view. When you start to adapt something through the screen, which is externalised behaviour, it’s difficult sometimes to reconcile an internalised activity world thought process and to make that makes sense from an external point of view. So, that was hard. We struggled a little bit to begin with finding the correct format for the piece, because at first, we thought it should be three parts. We eventually came to the realisation; it wasn’t working in three parts because it’s a single protagonist’s story. You’re with Maud at the beginning and you’re with Maud at the end and you journey through the piece from Maud’s point of view. So, it made better sense to tell it as one complete single story.

Did you feel any kind of additional pressure given how loved the book became once you were on the project?

As a writer, what was the experience like of juggling those two time periods whilst at the same time pacing the thriller?

That was one of the hardest things because you’ve got two competing story lines and really the main mystery is in the past. The thing about the mystery in the present, she’s experiencing it as a mystery, as a threat, as jeopardy and something terrible has happened and she can’t work it out because she can’t remember what she’s found out. So, for her the sense of jeopardy and the sense of threat is huge. But in reality, in the present day, the thriller element is really not as strong as it is in the past. So, it’s your job or my job to keep that sense of thrill and mystery going without short-changing the audience because then that’s hokum and red herrings and that’s not acceptable. You have to keep it true and authentic. The difficulty or the challenge came about trying to keep the mystery going through what she sees and how she interprets what she sees. Which is totally different from someone who doesn’t have dementia.

I think quite often when you watch plays or films when a character has dementia, you observe them, and you observe their dementia and usually you are observing it from the point of view of another character. The way Emma has written her book and the way we have tried to be true to that is to experience the dementia from inside Maud’s head, so that you feel like you’re immersed in it with her, that when she feels panic, when she feels stress, when she feels joy, you are experiencing that with her. I feel that it is quite an immersive experience of dementia, which you don’t always get.

Can you tell me a little bit about the casting and how that came together?

Aisling was absolutely the only name that came up as director, we just knew she would be perfect for it. In tone, in sensibility, in attitude, in artistry and everything. So, she was approached and luckily for us, she said she wanted to do it. When we talked to her about it, she had showed us a little sizzle reel that she had made of images. It was almost like she was in my head; I’ll never forget, it was just incredible because she just got it! She suggested Glenda Jackson for Maud. From that moment on that’s who Maud has been in our heads. Luckily for us, Aisling was able to go and meet Glenda and persuade her to do it and I think it’s just been an extraordinary experience for all of us watching her create that character. Yes, she’s an astonishing actress.

If there is one thing that you hope the audience will come away from the film feeling or holding on to, what would that be?

I am hoping people who watch this journey realise that dementia is not just old age, but the fracturing of a mind. That is what dementia is, and I think more help should be given to people with dementia.