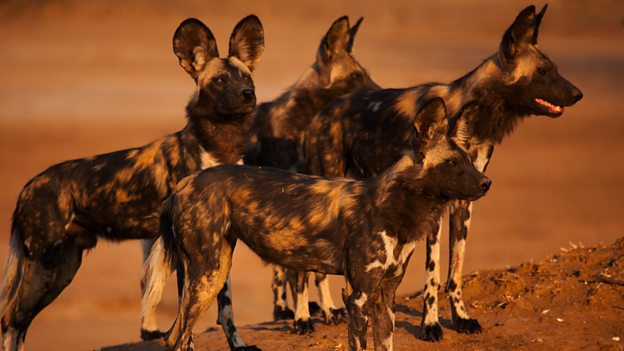 When you follow animals for as long as we did, you get to know them and care what happens to them.Nick Lyon

Category: BBC One; Factual; BBC Studios
Tait is a painted wolf, matriarch of one of the last great families of this endangered animal.

She has ruled her dynasty for many years on the banks of Zambezi river in Zimbabwe, keeping the peace within her sprawling family.

But tensions are rising. Tait is growing old and her power is waning. One of her daughters, Blacktip, lives close by. Her own pack is growing fast and they are running out of space. She urgently needs to get more territory so that her pack can catch enough food. But she has a problem. She is hemmed in on one side by human lands. There is only one way she can go to get what she needs - her own mother’s lands.

Painted wolves thrive through cooperation. It is what had made this dynasty so strong, for so long. A family feud could bring it to its knees.

This is a species that has almost too many common names to count. Its Latin name - Lycaon Pictus - means painted wolf and it is a misunderstood and widely persecuted species. They share a common ancestor with the wolf but are not descended from them like domestic dogs. Painted wolves are not often the focus of natural history films because they are very hard to follow! 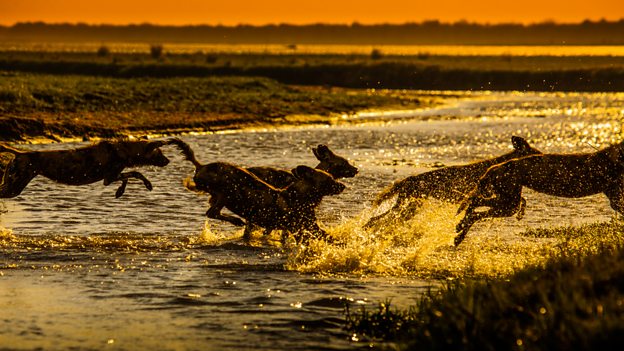 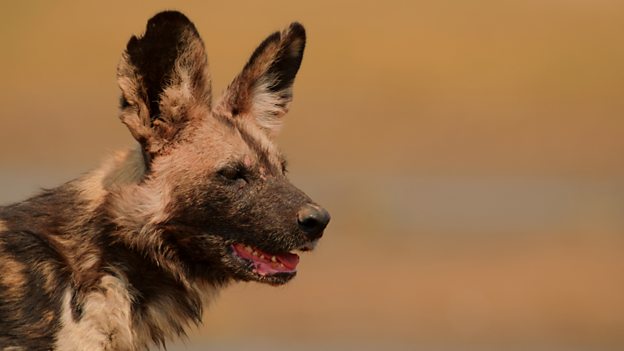 An interview with Nick Lyon, Producer of Painted Wolf

Who are the main characters in this story?

The team arrived just as the most tumultuous period in the packs 20 year known history was beginning. The specific packs filmed in this series formed the ultimate dynasty - Tait is the matriarch of the whole dynasty - strong, stable and reliable. An aging leader who was the matriarch of three related and neighbouring packs on the Mana Pools Floodplain.

Then we have Blacktip, one of Tait’s daughters. She runs a very large pack at 30 strong - unusually big today, but a standard size in the past. When our story starts, Blacktip needs more space and Tait is vulnerable. The film is very much a battle between mother and daughter. It feels Shakespearian in its scale and in the intensity of the rivalry.

What are the big moments we should be looking out for?

We have one sequence where we see Blacktip’s pack pushing Tait’s into lion territory. Tait is an old, wise leader, which gives her a chance of keeping her pack alive there. But Blacktip is more naïve and when she goes in after Tait, she gets it wrong and four lionesses came for her and her pack. You’ll have to watch the film to find out what happens then!

But also in this film, you will see them as loving pack members, with hugely strong bonds. Bonds that mean the whole pack support the young of the alpha couple – the only two animals to breed in the pack.

Were any new behaviours discovered?

Yes. For example, all the books we used for research say that painted wolves don’t hunt baboons because they’re too dangerous. A big male baboon can weigh twice what a painted wolf weighs. But Blacktip’s pack had grown strong in numbers and we saw them learning to take on taking on baboons. It is amazing behaviour.

Is it hard to film painted wolves?

It was a real challenge. They range over such huge areas and a lot of that is hard to cover in a car. We drove a total of 82,000 kilometres following and filming them. The hardest time is in the wet season when the landscape is sodden and flooded. We slogged through thick mud trying to find the animals and just as we were getting into position to film - bang! - a tyre would blow and we’d lose the pack. On just one shoot we got 22 punctures. But after all our following we got into sync with the packs, and we understood their habits and routines. This would let us get ahead of the pack, get into position in advance and make big decisions that were gambles but paid off, because we had grown to understand these packs so well.

Do you feel like you bonded with the dogs over the course of filming?

Definitely. When you follow animals for as long as we did, you get to know them and care what happens to them. It becomes an emotional experience when you see one of the characters having a bad time, or having real success. I loved the puppies! I remember when they were out of the den for the first time at just three weeks old. They were so tiny, with over-sized heads, that would overbalance on their front legs.

The painted wolves got to recognise us too and were completely relaxed having us around. It was like they totally accepted us being there with them. Such a privilege and it allowed us to get some extraordinary insights into their lives.

How did you keep track of the painted wolves in that huge landscape?

A lot of that was down to the tracking skills of our guides. Nick Murray has spent so long tracking the painted wolves that he knew the exact routes they needed to travel in the wet season to get around, and he could navigate us through tough terrains and mazes of streams and rivulets, to pop out next to the pack.

Another of our guides, Henry Bandure, was phenomenal. He would look at a paw print in the sand, and could tell how long ago the pack had passed by how much sand had blown into the print or by what type of tiny insect had walked through the print after it had been made. He could even tell which pack it was by the smell of its dung – he could do that while driving along in the car! That particular skill allowed us to find a pack we had lost overnight, and to get into position just in time to film one of the key moments in the whole story.