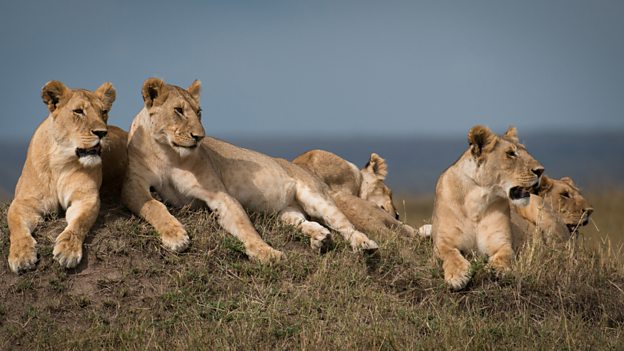 Even though the lions essentially ignored us for the whole of the filming, we really felt we had gotten to know them and I shed a tear when it was time to leave at the end of the final shootSimon Blakeney

Category: BBC One; Factual; BBC Studios
One of the most famous lion prides in Africa - the Marsh Pride of Kenya’s Masai Mara.

As the story begins, the Marsh pride is in a unique situation in their history. They have been abandoned by all of the adult males who - until now - defended the pride. Just two adult females are left to feed and protect their eight youngsters. The future of the whole family rests entirely on the shoulders of these two mothers, Charm and her cousin Sienna. They need to raise their cubs to adulthood if this great dynasty is to continue. They and their cubs will face the great perils of the African savannah - raging herds of buffalo, rival lion prides, the constant menace of marauding hyenas. And, in a fateful turn of events, a clash with humanity.

An extraordinary story of leadership against all odds.

Geographic dynasty: Several generations of the Marsh Pride have been filmed for previous BBC series and have been followed on and off for over twenty years. This was the first time anyone had followed the pride as intensely as this. When filming began, the pride consisted of ten individuals. This pride live around Musiara Marsh in the Masai Mara, Kenya which is an area made up of grassland, marsh and forest alongside the Mara River. The area is protected and reserved for wildlife, and is surrounded by other conservancy areas. However, there is still significant pressure on the lions and their territory from nearby herdsmen and their cattle.

Facts about the species 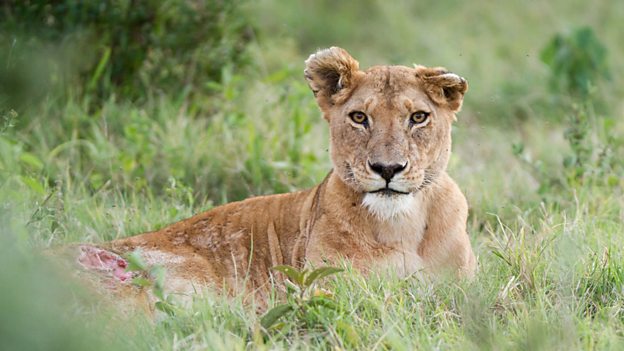 An interview with Simon Blakeney, Producer of Lion

What moments are you excited for people to see?

What I am most excited for the audience to see is how incredible the pride’s lead female is. Charm is a skilled hunter, a powerful leader and an experienced mother. From the moment our filming began she had the huge responsibility of protecting her pride against overwhelming odds. The whole crew had incredible admiration for her.

Some of the most exciting moments involved the pride’s two sub-adult males, called Tatu and Red. They are like teenagers, in human terms. At one point in the film they both sparred with a hippo, half trying to catch it. It was a crazy, over confident teenage thing to do because a healthy hippo is easily more powerful than the two lions put together. Tatu had his front feet on the flanks of the running hippo, and his back feet were bouncing and splashing across the water-sodden ground. They were never realistically going to bring it down. For the crew, witnessing and filming moments like that were incredible.

Another time Red got himself in real trouble when he wandered off alone, and walked straight into the middle of a large clan of hyenas. Initially he tried to show how dominant he was by chasing individual hyenas. But by the time he got over his bravado, he was surrounded by twenty or thirty of them and couldn’t escape. Each time he lashed out at one that came close, others would attack him from behind. He was vastly outnumbered, and trapped in a life and death situation.

It sounds like you get a real sense of different personalities in the pride.

We could often tell the lions apart even at distance, just by what they were doing. For example, as she grew up, a young lioness called Yaya would hunt anything that moved. A mongoose, by all accounts, tastes horrible but she would constantly chase them. She was like a cat with a ball of string.

There was also Charm’s youngest son, who would eat more than anyone else. You always knew that he would be the the last lion to leave a kill, eating until he had a belly like a balloon. While we don’t deliberately or consciously project personalities onto the lions, the individuals do undoubtedly behave differently to each other, and it was great to be able to get to know them and see those subtle distinctions.

Were there any emotional highlights?

We watched Charm defend her family against buffalo. Buffalo have a rivalry with lions, and if they get a sniff of a youngster they will try to kill it. At one point Charm was faced with a herd of over a hundred buffalo. She was amazing – she became a snarling ball of fury. There were buffalo behind her, buffalo in front of her and if they couldn’t get at the youngsters then they would try to kill her instead. It was an incredible scene, and a really tense moment to watch.

For me, the most emotional and memorable moments were when the lions came really close to us. We would always park up a reasonable distance from them - so we didn’t disturb their behaviour - but sometimes they would walk up and past our cars, often just because we were on the shortest route to where they wanted to go. On one occasion, about nine months into filming, one of the adolescent males walked around the back of the vehicle I was sitting in, and as I was on the radio at the time I hadn’t seen him coming. He made me jump when he just appeared right beside me. I could have stroked his mane as he walked past! It’s easy to forget how big they are until you are up that close! This was particularly true for this young male, Tatu. When we had started filming he was a gangly youth, but by this point he had really grown - both up and out - and was huge.

What did it take to make this film?

In total, the filming took over 400 camera days. The hours were long - out before dawn every day and back after dark, then at night we would be downloading footage and getting kit ready. We were working 98 hour weeks! But it was completely worth it. It was an extraordinary experience spending weeks on end with the lions, although for much of the time there was nothing to film. Lions spend a considerable amount of every day asleep, but we had to be with them for every minute in case something suddenly happened. Time passes a lot more slowly when you are watching a bush, waiting for the lions inside to wake up and emerge.

During the two periods when the crew filmed at night they aimed to follow the lions for 24 hours a day, with a day shift and a night shift. However, a combination of long grass, violent thunderstorms, flooding and vehicles getting stuck in difficult terrain, often meant they lost the lions and had to find them all over again.

Subsequently the hardest thing was when it came to the end of the filming because I think we all really miss living so close to that family. It was such a privilege to be able spend so much time with them. Even though the lions essentially ignored us for the whole of the filming (which is what we wanted them to do!), we really felt we had gotten to know them and I shed a tear when it was time to leave at the end of the final shoot (I wasn’t the only one…)