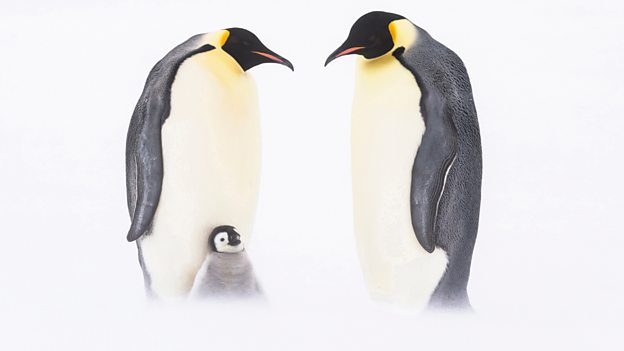 From the moment we started filming there, the amount of light that we had to work with would get less and less, and the temperatures would get colder and colder.Will Lawson

Category: BBC One; Factual; BBC Studios
A colony of emperor penguins gather in Atka Bay, on the coast of Antarctica, after three months feeding at sea.

They arrive as the sea freezes over and all the other Antarctic animals have left the continent for the relative safety of the sea. The penguins have come here to raise the next generation in their emperor’s dynasty. But to do so they will have to work together to keep themselves and their chicks alive through the coming winter - the coldest and cruellest on earth.

Emperor penguins are the largest of penguins and the most dedicated of parents. The colony of 11,000 birds gather on the newly frozen sea ice in Atka Bay every year to face the Antarctic winter. They form one of the strongest pair bonds in nature - vital if they are to raise their single chick in the most hostile nursery on earth.

During the harshest times the males lock together to form a giant huddle, an incubator to protect them against the -40C temperatures and wind speeds of 130 kilometres per hour. Once the chick has hatched, the parents take it in turns to return nearly 25 kilometres back to the sea to bring back food. After a few weeks, the chicks are left alone to face the blizzards while both parents go to sea. A chick on its own will die of cold, so they must learn to huddle for themselves. 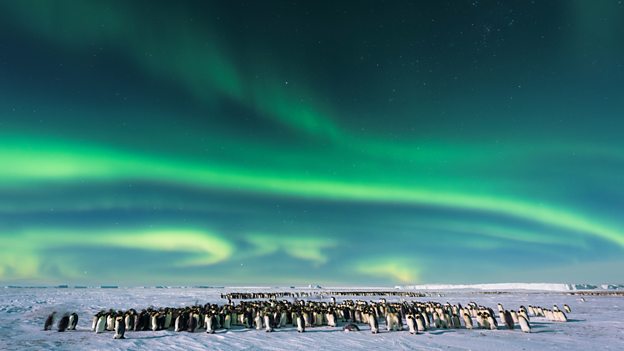 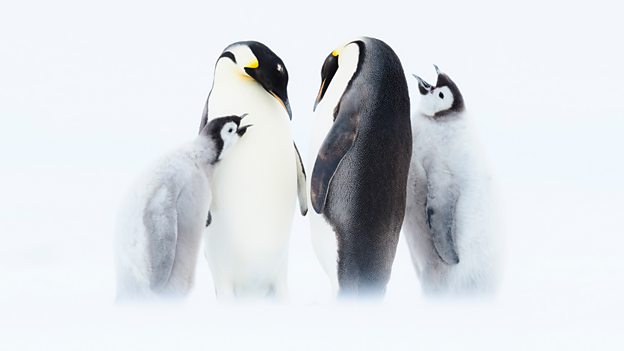 An interview with Emperor Producer Miles Barton and Director Will Lawson

All the others films seem to be about big animals violently turning on each other. Penguins don't immediately seem like that sort of animal?

Miles: No, but nevertheless I think the film will be a surprise. I don’t think anyone has shown just what a huge struggle it is for emperor penguins to bring up their chicks in what must be the most hostile nursery on earth.

All the other Antarctic animals leave in the winter; but emperor penguins arrive. This is really about what the elements do to them. These thousands of penguins have to find a way to keep warm. They do it through a spectacular way of huddling. It is a massive feat of cooperation because every emperor father needs the same thing at that time, to keep warm, and huddling together is the only way to achieve that. The team got wonderful time lapses of the huddle, where you see it moving around almost like a single organism, due to the constant movement of all the individual penguins.

Life is really tough for the chicks. We have a scene where they are all left on their own because their parents have to go back to sea to catch food for them. The chicks are still only foot-high balls of fluff. Then a blizzard rolls in. This is a really dangerous time because without an adult to follow around, a chick can easily get lost, and a lost chick is probably going to become a dead chick.

Will: I remember the first time that we actually experienced a storm after the eggs had hatched. It was brutal with winds well over 100 kilometres an hour. We knew that some of the chicks wouldn’t make it. But what was really amazing is that most of them had survived. I don’t think a human would have lasted long in those conditions, whatever protective gear they were wearing. But there were all these chicks pottering about looking none the worse for their experience.

In broad strokes, what is the narrative of the Emperor film?

Miles: We start with winter coming to Antarctica, which is when a new landscape forms as the sea freezes. A penguin arrives in this white landscape alone, and is soon joined by all the others. They depend on this temporary ice world to breed on. It will break up again when the ice melts after eight months, so this is their window of opportunity to create a new generation. But it means they have to find a way to live and breed there through the Antarctic winter, which is the most brutal on earth. There is probably no greater story of survival and hardship in nature.

What were the challenges of filming in those conditions. Did you have any close calls?

Will: It is an extremely challenging place to film. Everything took two or three times longer than we had anticipated. From the moment we started filming there, the amount of light that we had to work with would get less and less, and the temperatures would get colder and colder. On top of that, a lot of our equipment is electronic, and electricity and cold is not a good combination!

Miles: Lindsay McCrae, our cameraman, looked like the Michelin man, because he would have large camera batteries inside his many layers of Antarctic clothing to try and keep them warm enough so they would actually work. To stay down at the level of the penguins Lindsay ended up sitting on the sea ice for weeks on end. Can you imagine doing that? With only a metre of frozen ice between you and the ocean below? I couldn't do it.

Will: Whilst we were attempting to film in some of the winds, a lot of our kit just completely froze solid. We had brought a head for our tripod that had been treated with fluid that was supposed to make it entirely resistant to freezing, but it just locked stiff! We had to physically lift the tripod and turn it into the positions to get the angles that we needed.

Miles: The team did come across a crack in the ice when travelling to the filming location and could hear the ice sheet moving. They then avoided that area, which turned out to be the right decision, as a few days later that whole section of ice floated off into the sea and would have taken them with it!

Is an ecological warning one of the underlying messages of this film?

Miles: We want to make clear the problems facing these animals in the long term. Almost all of the 50 colonies of emperor penguins in Antarctica come to breed on the sea ice. But it is temporary ice which forms each year, and with sea temperatures rising it's believed that in 50 years there will be considerably less sea ice. That could have a devastating impact on these birds because it takes away the only places where they can breed.