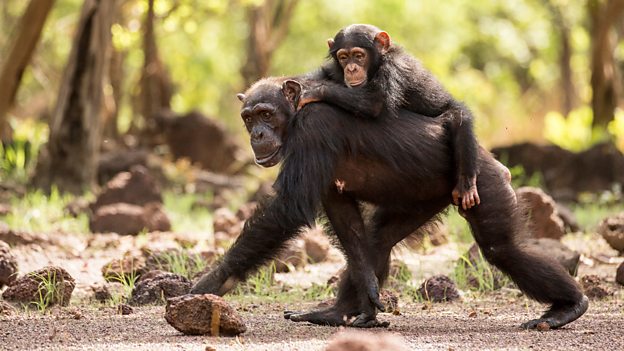 I think they saw us as something that wasn’t connected to their society or their personal battles, so they were very accepting of us following them around.Rosie Thomas

We join his story when he’s been alpha for three years. Males don’t usually rule here for longer than this - they get overthrown. To make matters worse, David has no allies to help him defend his leadership. The dry season is setting in, meaning food and water are becoming scarce. The group is forced to stick close together to survive. David is now surrounded by rivals who all want his crown, and are prepared to kill him for it.

David will face brutal battles, have his world engulfed in flames and will have to pull off an extraordinary act of deception. Can he overcome the threats to his leadership and hold on to the alpha position long enough to sire a possible future heir to his throne?
This is a story of power, politics and the fight for survival.

The Fongoli Chimps: This group of about 32 chimps live in South East Senegal, where forest meets the Saharan desert. They have a huge range of about 92 square kilometres, made up of forest and savannah. Through the few rainy months of the year they split up across their territory, but with the dry season they start to spend more and more time together. This is when tensions rise amongst them and when their leader faces his gravest threats from rivals. This family’s alpha male is David, who leads with strength and determination but often has to assert himself against younger rivals or during squabbling in the ranks.

Endangered status: Chimpanzees are endangered, but the Western chimpanzee sub species was declared critically endangered in 2017, as the population decline has been so rapid.

Geographic dynasty: This landscape is at the very edge of where chimpanzees can survive. Temperatures soar over 40C and the landscape dries out in the long dry season. In order to find enough to eat and drink the group have to roam a vast territory - a territory ruled by David. As female chimps grow they disperse to find new groups to live in. But males stay within their own group for life, making it a pressure-cooker of rivalries and ambitions.

This group of chimpanzees in Senegal are unique. The imbalanced ratio between males and females (12 males to seven females) and the extreme nature of their environment, means they face stresses not seen elsewhere. Those stresses create a lot of dynamism in the group - rivalry, battling and politics. If the production team were to have a chance of capturing major change happening within any group of chimps, then this group at Fongoli was the one to film.

At the start of each shoot, on our first day back with the group, David would come up and give the team a dominance display, using body language to remind them that he is the boss around there. Once he’d sorted that out he didn’t really care about the crew anymore and left them to get on with it.

Each day the team would have to rise before dawn. One of the scientific research team would lead the crew into the forest in the dark, to find the chimpanzees before they got up and started moving, otherwise they might lose them for the entire day. They’d then follow them all day, trekking if the chimps were on the move or, sit there watching them for hours on end at the hottest times when the chimps would stop and often go to sleep. The crew would then stay with them until they settled down for the night, before walking back to base in the dark. 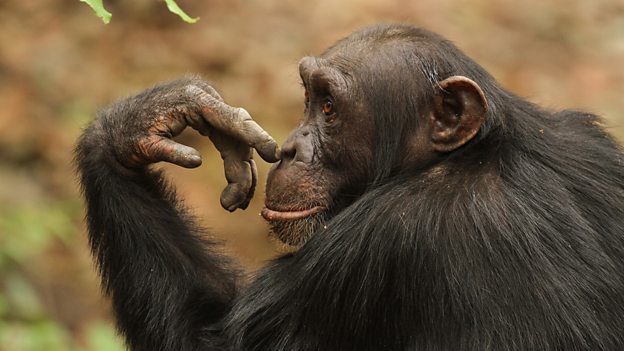 An interview with Rosie Thomas, Producer and Director of Chimpanzee

Why did you choose this specific group of chimpanzees?

Through speaking with scientists across Africa, we identified a group of chimpanzees in Senegal that we believed were at a turning point in their society. The group’s alpha male, who the scientists had named David, had been in power for three years. No other alpha in this population had previously lasted longer. His brother had fought many battles to keep David in power, but he disappeared just before we started filming, leaving David isolated and vulnerable. Not only that, but in this group, there were more males than females. This meant there was intense competition among the males when females came into season. We felt like this whole situation would give us a chance to capture a power struggle.

What does a male chimp get out of being alpha?

A lot of grief! As alpha, you get the best access to things like food and water, and you also get the first mating rights with females. All the other males want these benefits too. Therefore, the alpha is constantly fighting battles to stop the others mating and to stop their attempts to topple him from his alpha position. In the long term, getting mating rights means babies. For a male, a chimpanzee dynasty is all about fathering as many babies as possible so there’s a chance that one day one of them might become an alpha. But becoming alpha and holding on to that top spot is really tough.

Are these power struggles as complex as they sound?

Yes. It’s all very political, and at times it’s a bit like watching a soap opera. Everything the chimpanzees do is in order to garner favour, to gain some kind of future advantage. They are always working out who is powerful and worth befriending and who isn’t. Similar to politics, there are characters that you like, and ones you don’t like. It seems everyone is trying to work an angle of some sort.

In some places in Africa there is quite a lot of interchange between the males of different chimpanzee groups, but in Senegal the environment is so poor that our group had a huge range of around 92 square kilometres. They never really bump into other groups. It means few new females join their group, creating imbalance, and all the competition between males comes from within. It’s a volatile society.

Did you see any unusual behaviours?

Our group lives in a very different environment to most chimpanzees, as it is a mosaic of savannah and forest rather than just dense forest. This means that they do things other groups don’t, which makes them very interesting to film. We saw them making spears out of branches to hunt galagos (‘bush babies’) up in the trees. No other group does this. In fact, it’s so unusual that for quite a few years some scientists didn’t believe the reports.

These chimps spend lots of time on the ground so they often go bipedal - walking on their hind legs - which looks extraordinary! Like something out of the Planet of the Apes movie.

They have to deal with a lot of fires in the dry season, but they can read these incredibly well by watching where the smoke’s going, and then working out how to travel around the fires safely. When there is a lot of water around, they lounge about in pools to help cool down from the searing heat. When there is almost no standing water left, they know where to dig in old, dry riverbeds to find it underground.

They use sticks to fish termites out of holes. Other chimpanzees have learned how to do that too but ours do it for a ridiculous length of time. One day I watched one chimpanzee fish for termites for four hours straight. They eat a huge number of termites!

How hard was this film to make?

Exhausting! Most of the time we were on foot. When we’re out on location, we get up at 4am and then walk out to the chimpanzees to get to them there before dawn. We’d stick with them all day until we lost the light. Then we’d walk back and go home. On a good day, we’d walk at least eight kilometres, but on a bad day we could travel up to 24! Between the three of us in the crew each day, we’d carry about 80 kilograms of kit, in temperatures that were usually about 40C. As a team, we walked over 2400 kilometres.

Bees were a huge problem. Sweat bees would swarm around your head, trying to get into your eyes and ears all day. Some areas were definitely worse than others, and you just hoped that the chimpanzees wouldn’t take their midday rest in a bad area for sweat bees, as you could be sat there waiting for them to wake up for several hours. But far worse were the honey bees. When the chimpanzees raided a bee’s nest for honey, the bees became really aggressive and we had to run as fast as possible with all the kit, sometimes for a kilometre or so to shake off the bees to avoid getting stung.

There are snakes that you have to be careful not to stand on too, especially when we were walking to or from the chimpanzees in the dark. There were often huge snakes lying across the path that we had to gingerly step over. One day we sat down, and the field assistant started clicking his fingers to get our attention and pointing at the ground. There was a huge scorpion sitting next to the cameraman’s foot. He quickly jumped up and moved out of the way. After that we really didn’t want to sit down for the rest of the day!

The toughest time of year was when the grasses were high. In many areas, they were thick and towered over our heads. You could hear the chimpanzees were only metres away, but couldn’t see a single thing. Trying to wade through this grass to keep up with them was claustrophobic and exhausting.

But I do feel very privileged to have been able to observe a group of chimpanzees at such close quarters for such a long period of time. Few people get to do that. I now feel like they are old friends that I know really well. We were even able to see some babies grow up, as some had just been born when we started filming and were about two when I last saw them. It was lovely to really follow them on that journey.

Did you have many moments of personal jeopardy?

The times we were most at risk was when fights were kicking off. The chimpanzees would often chase each other around and hurl rocks that are so heavy I can’t even lift them. Chimpanzees are incredibly strong - far stronger than humans - and we were very close! That was quite nerve-wracking because you really didn’t want to get hit by one! But they never threatened us. I think they saw us as something that wasn’t connected to their society or their personal battles, so they were very accepting of us following them around. Although when they didn’t want us around, there was absolutely no chance of keeping up with them!