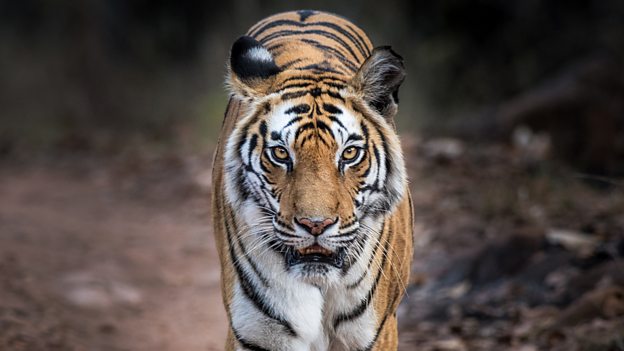 For the last 60 years, David Attenborough has been one of the world’s leading natural history filmmakers, making landmark series including Life on Earth, The Blue Planet and Planet Earth, seen by billions of people across the world. His extraordinary career has spanned black and white, colour, HD and 3D formats and his films have won multiple Emmys and British Academy (Bafta) awards. David was knighted by the Queen in 1985 and was given Britain’s highest honour, the Order of Merit. He has also received numerous other awards and is a fellow of the Royal Society. In Britain, David Attenborough is considered a national treasure and has recently been voted Britain’s most popular trusted person. David’s films continue to push the boundaries of camera technology and CGI in factual storytelling. His latest ambitious multimedia projects include both apps and virtual reality (VR) which both entertain and educate global audiences of all  ages. David joined the BBC in 1952 and within several years created his acclaimed Zoo Quest series - filming wild animals in their natural habitat for the very first time. By 1965, he was Controller of BBC Two and responsible for the introduction of colour television into Britain. In 1973, he left BBC senior management to return to his passion of programme-making. The internationally acclaimed, thirteen-part series Life On Earth was the most ambitious series that had ever been produced by the BBC’s Natural History Unit, and created the famous ‘landmark’ format that continues to make the Natural History Unit world renowned to this day. Throughout the 1990s, David presented natural history series to huge global audiences, including The Trials of Life (1990), The Private Life of Plants (1995), and The Life of Birds (1998). In autumn 2000, David presented State Of The Planet and a year later The Blue Planet. In 2002, he presented the immensely popular Life of Mammals, followed by Life in the Undergrowth and Life in Cold Blood. In 2006, he narrated the much-celebrated blue-chip series, Planet Earth, followed by Life (2009) Frozen Planet (2011), Africa (2013) and Life Story (2014). In 2016, he made two award winning specials: Light On Earth and Attenborough’s Giant Dinosaur. Sir David has most recently presented the four time Bafta and two time Emmy award-winning series Planet Earth II (2016) along with Emmy award winning series Blue Planet II, (2017) for which he won the award for Outstanding Narrator.

Michael Gunton works for BBC Studios as the Creative Director of Factual and the Natural History Unit.

Mike began working for the BBC after he graduated with a first class degree in Zoology and a Doctorate at Bristol and Cambridge Universities. Mike’s work within the Natural History Unit has seen him establish the ‘People and Animals’ output, run the Natural World strand and oversee over 200 wildlife films including critically acclaimed series from Yellowstone to Life, Africa, Life Story and the Bafta and Emmy winning Planet Earth II.

Mike’s series all have his own stamp of innovative storytelling that use unique perspectives and pioneering technology, to evoke wonder for the natural world.

Outside of TV Mike has directed the Emmy award-winning film One Life, worked closely with Sir David Attenborough on many productions and speaks internationally at media, entertainment and scientific gatherings as an ambassador for the BBC and NHU.

After graduating from Bristol University with a degree in Zoology Rupert started work with the BBC in 1987. His programmes have won awards around the world, including Royal Television Society, Jackson Hole, Missoula and Wildscreen.

He has a passion for story-telling and innovation in wildlife film-making. He has made programme for various wildlife series including Alien Empire, Wildlife on One (Butterfly - beauty or the beast), Natural World (Metropolis), Tales from the Riverbank (carp - the fish of your dreams), Life (reptiles and amphibians and Insects) and Africa (Sahara). As Series Producer he ran the natural history units series for the millennium year, State of the Planet, presented by David Attenborough. He was also the series producer of Life Story and currently, Dynasties.

Rosie is a natural history producer/director at BBC Studios Natural History Unit, and has spent the last four years producing the Chimpanzee episode of the Dynasties series.

After completing a Bachelors degree in Biology and a Masters degree in Taxonomy and Biodiversity studying at the Natural History Museum in London, Rosie worked in a number of different genres before joining the BBC Studios Natural History Unit 13 years ago, to work on the multi award winning series, Life. She has since worked on other award winning productions including Africa and Monkey Planet.

She has travelled all over the world filming a wide range of different animals, from elephants in Central Africa to lizards in Tasmania, but she has spent a large part of her career filming primates, all across the globe. This has now culminated in her spending the last two years filming a single group of chimpanzees in a remote part of Senegal for the Dynasties series, and adopting a different style of innovative storytelling and the latest camera technologies to bring the true-life drama of their story to your screens.

Miles Barton is a Bafta award-winning producer who has worked at the BBC Studios Natural History Unit for over 30 years on series ranging from Life of Birds to Springwatch. As the series producer of Life in Cold Blood, he won both a BAFTA and Wildscreen’s Golden Panda award. More recently he also series produced Attenborough; 60 years in the Wild, Attenborough and the Giant Dinosaur and Zooquest in Colour. He produced two films for the Emmy award winning Frozen Planet and two for Life Story both on BBC One. Most recently, he produced the Coasts episode for Blue Planet II.

Will Lawson, Director/Assistant Producer of Emperor

Will currently works as an assistant producer for BBC Studios having spent 2017 directing and living in Antarctica. Will also works as a Naturalist and Trainer for Biomimicry UK and advisory group member for CoalitionWILD.

Will's passion and enthusiasm for the outdoors has spurred him on to gain his Dive Master and Yachtmaster qualifications at Sea and FGASA (Field Guide Association of Southern Africa) Assessor Qualification, on land; working in the past as guide and instructor for Africa's longest standing Game Ranger training organisation; Ecotraining.

Until 2011 Will ran the safari department as Head Ranger at Sabi Sabi Private Game Reserve where he began guiding in 2006. Will's enthusiasm for African wildlife was inspired by natural history documentaries and so it seemed fitting that he should now use his knowledge to make wildlife television productions.

Simon Blakeney is the producer of the Lion episode in the Dynasties series. He has worked at BBC Studios Natural History Unit for 12 years, first working on the behavioural series Life, and subsequently producing films for blue-chip series including Africa, Shark and most recently Dynasties and Great Rivers.

Since joining the BBC, Simon has had the opportunity to develop skills from rebreather diving, to caving, to off-road driving. He has had the privilege of working on a huge range of subjects across the world - from following sea snakes through underwater caves beneath a remote South Pacific island, to filming huge eagles hunting amongst a flock of ten million giant fruit bats, to trekking to a glacier at the top of Africa’s largest mountain range.

However, the Marsh Pride of lions featured in Dynasties have been one of the most incredible subjects he has ever been lucky enough to observe and film. Having the opportunity to get to know them has been his favourite part of his career so far.

Nick is happiest spending time with cats and dogs, be they domestic or wild. The painted wolf is the 10th species of canid that he’s worked with for extended periods; a family of animals that you can build a relationship of trust with over time. Nick’s favourite sequences he has worked on are when he has built a ‘friendship’ with his subject. This allows for a far more intimate portrait of the species than keeping a remote distance. Be it the coyotes of Death Valley, or one particular bobcat in California - it is trust that breaks down barriers and allows Nick to witness and capture truly wild behaviours, at the point when his subject feels at ease with him. Nick is an anthropologist by training, understanding animals always came naturally to him. If you were to ask Nick what was the most likely thing to ruin a shoot he would say it would normally be some human intervention of politics, so his anthropology comes in useful for navigating these issues, after that: the animals are easy! Working with the painted wolves over a period of several years has been an absolute dream for Nick – the level of trust developed with the packs was something he had never been afforded the time to do before. Being able to spend time with a wild animal from a three-week-old puppy through to adulthood meant that he not only got to know the species so much better, but he learned all the individual personalities and quirks of each member of the pack. As well as being the Producer/Director for Dynasties' Painted Wolf episode, recent work of his includes Producer/Director for episode three of Wonders of the Monsoon, Assistant Producer for episode one of Wild North America and Associate Producer of Good Morning Kalimantan.

Theo has worked at the Natural History Unit for eight years working on Natural World, Lost Land of the Tiger, Life Story and Dynasties. He has specialised in telling stories of some of the most charismatic animals on Earth; from bonobos and lions to meerkats and fur seals. He has a deep love of India and it was a childhood dream to make a documentary about tigers. Theo directed the Tiger episode of Dynasties spending months looking for the tigers, (badly) learning Hindi and eating as much curry as he could. When he wasn’t on location in India, he worked as the Assistant Producer on the Emperor episode, testing the filming equipment in a -50C freezer, meeting scientists and setting up the epic 10 month shoot to Antarctica.