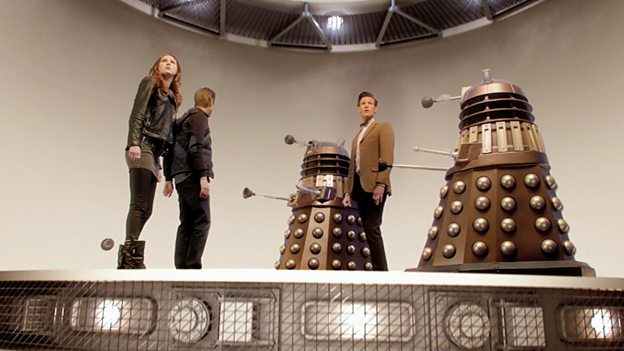 Category: BBC One; Drama
Doctor Who returns this autumn to the BBC, starring Matt Smith, Karen Gillan and Arthur Darvill as they head off on five epic adventures.

From Daleks to Dinousaurs and an alien with a grudge, this series features a whole host of guest stars, including: David Bradley, Rupert Graves, Stephen Berkoff, Mike McShane, Ben Browder, Adrian Scarbourgh and Anamaria Marinca.

Episode 1: Asylum Of The Daleks - Kidnapped by his oldest foe, the Doctor is forced on an impossible mission - to a place even the Daleks are too terrified to enter... the Asylum. A planetary prison confining the most terrifying and insane of their kind, the Doctor and the Ponds must find an escape route. But with Amy and Rory’s relationship in meltdown, and an army of mad Daleks closing in, it is up to the Doctor to save their lives, as well as the Pond’s marriage.

Episode 2: Dinosaurs On A Spaceship - An unmanned spaceship hurtles towards certain destruction - unless the Doctor can save it, and its impossible cargo... of dinosaurs! By his side a ragtag gang of adventurers; a big game hunter, an Egyptian Queen and a surprised member of the Pond family. But little does the Doctor know there is someone else onboard who will stop at nothing to keep hold of his precious, prehistoric cargo.

Episode 3: A Town Called Mercy - The Doctor gets a Stetson (and a gun!), and finds himself the reluctant Sheriff of a Western town under siege by a relentless cyborg, who goes by the name of the Gunslinger. But who is he and what does he want? The answer seems to lie with the mysterious, Kahler-Jex, an alien doctor (yes another one!) whose initial appearance is hiding a dark secret.

Episode 4: The Power Of Three - The Doctor and the Ponds puzzle an unlikely invasion of Earth, as millions of sinister black cubes arrive overnight, almost like presents falling from the sky. But what are they, what’s inside them and most importantly, who sent them? With the international community at a loss, it’s left to the Doctor to unearth who is behind the mystery.

Episode 5: The Angels Take Manhattan - The Doctor's heart-breaking farewell to Amy and Rory - a race against time through the streets of Manhattan, as New York's statues come to life around them. With Rory's life in danger, the Doctor and Amy must locate him before it's too late! Luckily, an old friend helps them and guides the way...