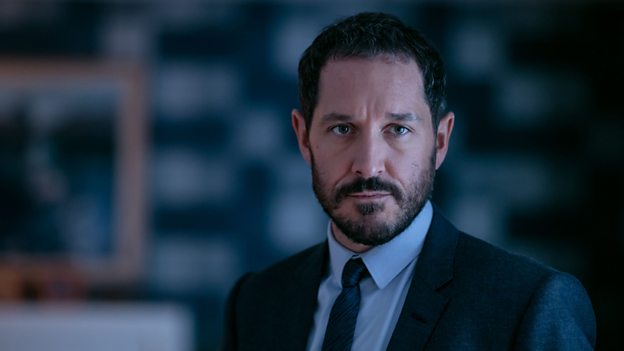 Where do we find Simon at the start of series two?
Two years have passed since the last series aired and that same amount of time has passed for our characters, which is really interesting. Simon has spent a lot of time rebuilding himself, in every sense. It was interesting for me trying to work out what he has been doing since series one. We pick up with him after a period of introspection and massive transition. Now he’s back, with a new suit of armour, but deep wounds underneath it. He thinks he’s changed; I’m not so sure. Time will tell as the series progresses!

Do we learn more about him this series?
We spend more time with him this series. Funnily enough, although Gemma was sort of a detective in series one, uncovering clues about him, we didn’t actually see very much from his point of view. This time around you get more of an insight into where he’s coming from. He’s more proactive than reactive.

Was it easy for you to get back into him as a character?
Mike and I spent a lot of time before shooting talking through the scripts as he shaped them through successive drafts, and I found that really useful. We had a long and really healthy period in prep, so when we came to shoot it I was right back there very quickly. So it was easy but not uncomplicated, I had to ask questions about who he had actually become over the two years.

You’ve played him for two series now, are you fond of him as a character?
I make it a rule of all the characters I play to leave judgement at the door, and that goes for Simon as well. I don’t think you can play a character and like or dislike them, I don’t think it’s helpful. It’s more useful to think about how a character feels about himself. I certainly feel that I understand and have empathy for him, but I wouldn’t say I’m fond of him.

When you first read the scripts for series two what did you think?
I remember reading the first draft of episode one and being absolutely gripped. In terms of where it ends up, I knew the arc but I didn’t guess the climax!

The dinner party scene in series one had a huge impact on viewers. Do you think that had anything to do with Mike’s theatre experience?
We had some 15-page scenes in this series of just two characters talking and you don’t normally get to do that on camera, it’s almost unheard of. That gives us actors the opportunity to take control of a scene and that’s very unusual. The scenes have real emotional heat in them which requires a certain kind of process from everybody and that is thrilling. The dinner party scene was like that and there are several scenes like that in series two.

Why do you think series one resonated so much with audiences?
It tapped into an unease that many people can relate to, the idea of being cheated on. Series two will resonate with anyone who’s ever been deeply hurt in a relationship and tried to move on. I hope there will be a similar emotional appeal as there was with series one. Doctor Foster is a brilliant study of the way power shifts inside relationships and there’s just something clever with the way Mike plays with audiences expectations.

When Doctor Foster was first trailed it was billed as 'the BBC’s new medical drama'. People would have tuned in expecting to see a medical show and what they actually got was a dark psychological thriller. Mike is very clever at writing stories that people think are about one thing but actually explore something quite different, yet universal, inside that.