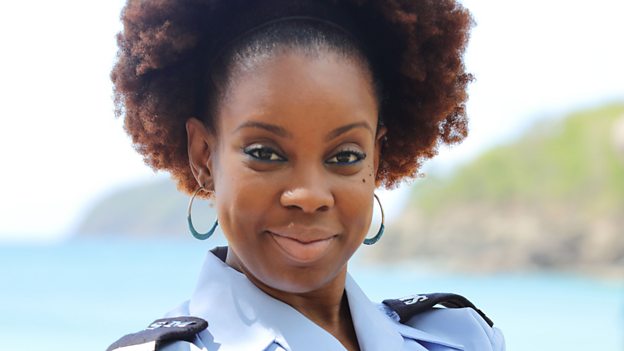 When I first heard about the show and read the character breakdown, I fell in love with how Ruby was described.Shyko Amos

Death in Paradise is back for an eighth series! How excited were you to be joining the cast?

Introduce us to your character, Officer Ruby Patterson. Who is she?

Officer Ruby Patterson is Commissioner Selwyn’s niece. She is the rookie police officer and this is her first real job. Before now she’s just been having a good time, she’s really an island girl, she knows the island and spends her weekends partying on the beach with jobs in between. Selwyn wants her to grow up a bit so he gets her the job in the Honore police team. Throughout the episodes Ruby goes on a journey from rookie to the rookie who doesn’t really quite know if this is going to work, but still thinking that they could make this work

Does she have a natural flare for police work or did she have training?

Ruby’s natural flare comes in when she’s around people, she’s a people person and she has this affinity with the island because it’s where she grew up. Ruby has a knack for extracting information from suspects due to her friendly personality yet she doesn’t actually see it as a positive, or see it as something that is integral to the work. There are just a lot of things about her that benefit her work, she just needs to realise what they are and use them to their full potential.

How does Ruby fit in with the rest of the team as the Commissioners niece?

Ruby has a pretty long rope, particularly when she first joins, because everyone’s aware of who she is but she’s such a whirlwind they need to tighten the rope.

Officer JP Hooper is Ruby’s mentor. What is their relationship like? How does that dynamic work when solving the cases?

JP is the class boffin, he wants to do well and he wants to get it right. This is job he’s wanted to do, he’s very studious and he outwardly just takes pride in that. Everything is too the letter and he’s a great police officer because of it. Ruby is not by the book, she is out of the box and she doesn’t do things to the letter - she writes her own letters. She’s free and fluid, so when she’s put with JP who has a set way of working and rules they clash slightly. JP is trying to mould Ruby and Ruby is not easy to mould

Can you tell us anything about the cases that feature this series?

There’s one set in a radio station this series which is I really enjoyed. It’s cool because music is very much part of that Caribbean feel, flavour and vibe, and it’s an episode where we get to see a lot of Ruby’s personality. Episode five and six are really juicy episodes, they’re so different for Death in Paradise - a bit darker and more action-packed

The scripts for each episode of Death in Paradise are full of twists and turns. Do you ever guess correctly who the murderer is without peeking at the end? Who is the best at working out who did it?

I tried to do it a couple of times but then I just gave up because the way they write the puzzles is so intricate - it’s so clever. It really is a skill and it’s why people love it. Who would be the best at guessing? That would probably be between Ardal and Tobi, they’re a dead heat when it comes to guessing!

What appealed to you about this project?

When I first heard about the show and read the character breakdown, I fell in love with how Ruby was described. The first thing that appealed was her character, I loved the idea of being able to play a woman who ‘says it as she sees it’, she’s proud of coming from Saint Marie and she’s her own quirky person. Then of course there’s the fantastic set of regular cast, I would love to emulate any of their careers, and I have loved working with them.

Have you ever worked with any of the cast before?

No, I didn’t know any of the regular cast or the guest cast personally before working with them on Death in Paradise

What was it like filming in Guadeloupe? Had you ever visited the island before?

I’d never visited Guadeloupe but I’ve been to the Caribbean a lot. I’m half Guyanese so I wasn’t nervous about going to Guadeloupe; I was just really excited about being in the Caribbean. Filming there was amazing; Guadeloupe is very, very different to the other Caribbean islands. It definitely has a French and European feel and that really sets it aside from all of my other experiences in the Caribbean it was really interesting being somewhere new. Also the heat, it’s so hot! I must say when I first heard everyone talking about the heat I was like ‘whatever, I’m Caribbean this heat is not going to kill me’, but you really cannot underestimate it. Filming in Guadeloupe was fantastic and I really enjoyed every second of it, I did a lot on the island, it was a great place to work.

What were the biggest challenges you all faced during the shoot?

The heat, I think that’s one of the biggest challenges for all of us.

Are there any anecdotes you can tell us about during filming?

Tobi is a joker because he’s very deadpan, once you get to know his personality you know when he’s doing it to someone else and its really funny to see. He’ll say things, but he’ll do it with such a straight face that people think he’s being serious but we know that he’s joking! Also watching Ardal between scenes with his chamois leather that he wears drenched in ice water plopped on his head to keep cool. In general we’re a fun bunch; we keep it light and have a giggle!

What do you get up to in your spare time when you’re not filming? Does everyone hang out together?

In my spare time on the island I go to a lot of concerts and music festivals. I went to three different concerts while I was there because I love Soca, which is Caribbean music, all of the artists come over from the different islands, so I got to see a lot of my favourite artists. There are also a lot of the day parties on the beach, which is something that is just so different and so specific to being in the Caribbean. Those are the days that you would just pinch yourself and be like ‘wow I’m spending my Saturday in a bikini on a beach with loads of people from the afternoon until the night, running in the sea, jumping out, raving to the DJ’. It’s awesome. One of the nicest things that Ardal does is after every episode he would invite the guest cast and we would all go for dinner.

What are you most looking forward to the audience seeing this series?

Death in Paradise has cemented itself as one of BBC’s most popular dramas. What is it about the show that audiences love?
It’s good TV. It reaches such a big demographic because families can watch it together. It’s a place you can go and just escape and just forget. Also it’s on in the winter and you get to see the sun. It’s a show that doesn’t take itself too seriously but yet there is this murder mystery running through it, it’s just hugely diverse and that is something we should all celebrate. It’s actually doing what we all say we want, and that’s amazing.