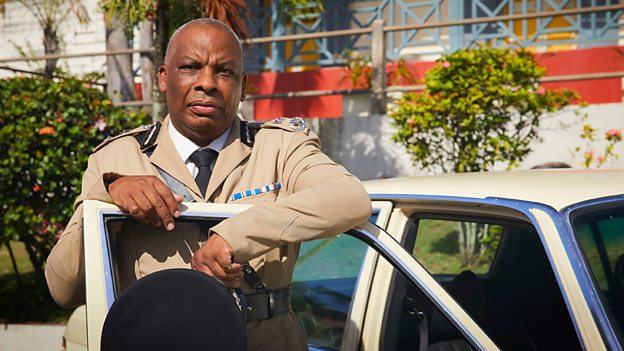 I don’t get bored of Guadeloupe or the sunshine. I love it! I don’t go in the sun much but I still want it to be there. It’s good to know that it’s just outside the door.Don Warrington

Death in Paradise is back for an eighth series! What can we expect this time round?

The new arrival to DI Jack Mooney’s team is Commissioner Patterson’s niece, Ruby, tell us about Selwyn’s relationship with Ruby and about her character?

Commissioner Selwyn is a very indulgent uncle. He thinks that Ruby is very good and has raw talent but she has a few lessons to learn which she will be taught by Jack.

What is Commissioner Patterson’s relationship like with DI Jack Mooney, and does Ruby’s arrival have an effect on that relationship?

To some extent, the commissioner is keeping a closer eye on Jack to make sure that he teaches Ruby the right lessons.

Can you tell us anything about the cases that feature this series?

There are various cases, all with the comic quality. They are all very intriguing and bring out different aspects of the island.

You have been in Death in Paradise since it first hit our screens in 2011, what do you enjoy most about being in the show and playing Commissioner Patterson?

The commissioner has developed over the last seven series. Usually in these types of shows, the boss tends to be the person that comes on and shouts at people. I’ve enjoyed trying to give him softer relationships with everyone involved. There are times when he’s very stern with the police team but he also employs his own style of tactic to get his point across.

The scripts for each episode of Death in Paradise are full of twists and turns. Do you ever guess correctly who the murderer is without peeking at the end? Who is the best at working out who did it?

What was it like returning to Guadeloupe for filming? Do you ever get bored of the sunshine?

No I don’t get bored of Guadeloupe or the sunshine. I love it! I don’t go in the sun much but I still want it to be there. It’s good to know that it’s just outside the door. I like the sea as well and looking at it from the island bay.

What were the biggest challenges you all faced during the shoot?

The heat. It’s very hot, especially in costume as it’s a full police commissioner outfit. I get very hot indeed.

What do you get up to in your spare time when you’re not filming?

This year was very good because I explored the island more than I had done in the past. There’s a local who lives there and he does trips around the island but not in a touristy way. He kind of teaches you about the culture of the island and he took us to some very beautiful places. He explained about the core of the islands vegetation and how it got there, and took us to see things that are very specific to the island, like the rivers and waterfalls, and that was very nice. We got to see the island from the inside as opposed to being an outsider. When you're filming you can end up in a bubble of your own so was a privilege to go to places like that.

Death in Paradise has cemented itself as one of BBC’s most popular dramas, what is it about the show that keeps the audiences coming back?

Well if I could answer that I’d write it! People tell me things like 'oh it’s because it’s on in the winter, its dreary here and beautiful there', but it’s also very popular in Malaysia so that doesn’t quite answer it. It appeals to such a variety of people, old people like it, young people like it. It has that secret ingredient.