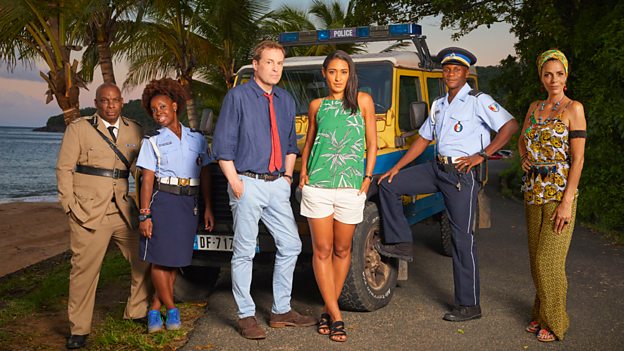 Category: BBC One; Drama
Filmed on the French-Caribbean island of Guadeloupe, the eighth series of the award-winning drama will continue to keep audiences guessing with intriguing mysteries, cunning plot twists and a star-studded array of guest cast.

Detective Jack Mooney has now settled in to life on the beautiful Caribbean island of Saint Marie and is starting to really get to know the people and places - to a degree that surprises some of his colleagues. But there’s little time for sightseeing, as there are some fiendishly clever murders to solve. From a popular local radio DJ killed while live on air to a victim being found dead in their very own police station when he’s supposed to be celebrating his 50th birthday in the rainforest, Jack and his team has their work cut out.

To add to the chaos there’s a new face on the team, as uniform officer Ruby Patterson arrives with energy to spare and her own unique take on crime fighting. Officer JP Hooper has got his hands full in trying to manage and train her, not least because she is the commissioner’s niece.

Meanwhile, seemingly nothing can faze DS Florence Cassell and after much coaxing she humbly reveals she has found love. It’s clear how the charming Patrice has captured Florence’s heart, but just as he begins to woo the rest of the team a discovery during a case makes them all question their judgment.