Home / Media packs / Doctor Who: The Day Of The Doctor / Interview with David Tennant

Doctor Who: The Day Of The Doctor 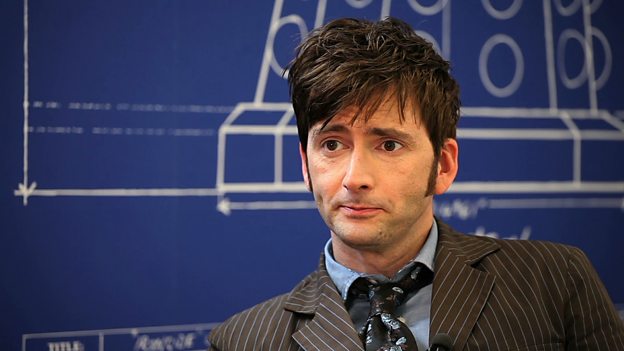 So few shows run beyond a few series and 50 years’ worth is quite a legacy, so I’m very honoured to be part of that."David Tennant

Last seen in his pin stripe suit and trainers in 2010, David Tennant returns as the 10th Doctor in the 50th anniversary special. Here he talks about rivalry between the Doctors and coming back to the show.

What is it like being part of the 50th in one of the biggest years for the show?

It’s very exciting to be around for the big celebration episode. I think since I left, the expectation had been that I’d end up in this special, because there is a precedent for old Doctors coming back for a visit around the anniversary time. I was thrilled because it’s a huge thing for Doctor Who and it’s a huge thing for television in general. So few shows run beyond a few series and 50 years’ worth is quite a legacy, so I’m very honoured to be part of that.

What is it like working with Matt and Jenna, was there any rivalry or competitiveness between the two sets of Doctors and companions?

It’s funny, I think people almost expected Matt and me to be at loggerheads, but we’ve really enjoyed it. I guess when you‘ve played a character for a long time you kind of feel like you know how they’ll react in most situations. It’s delicious to be handed a situation that’s completely new and a character meeting a version of himself is not something that you come across in a lot of drama. So to get to play that with someone as talented and as quick and brilliant as Matt is nothing short of jolly good fun.

You’ve probably seen some of the previous anniversary specials, but how do you think this one compares to them?

It’s very hard to be objective about something you’re in, especially when you set it up against things that you experienced as a child. But I certainly remember when ‘The Five Doctors' was on, it was electrically exciting. That was of course in the day when we didn’t even have a video player. You couldn’t revisit things, so the chance to see old Doctors that I had never seen on the telly at all, acting with the current, was fantastic. I hope that this will have some of that buzz for today’s generation.

Do you still watch Doctor Who?

Of course, I watch it every time it’s on, along with the rest of the nation.

How did you find filming in 3D compared to 2D?

Our job as actors remains the same really, but you’re aware that there’s a whole extra layer of technical stuff that has to be dealt with and the cameras are bigger. We shot a lot on this hand held camera, which was quite trying for Joe, our intrepid camera operator, who has this enormous thing that he has to lug around and navigate around the set; he did it brilliantly. But it causes some headaches for the camera teams and for the post production side of making it. We’re not doing too much novelty weaving into the lens for the 3D effect, but it gives it an extra zing.

Where will you be watching the episode?

Wherever I am in the world and whatever I’m doing, I’m sure I will make time for the Doctor Who 50th anniversary special.

During filming did you ever have a pinch yourself moments thinking, ‘God, I’m back’ or anything like that?

I think the thing with filming Doctor Who is that there is so much excitement around it and there’s so much enthusiasm for it that often the lead up to getting here is more of a delight than shooting it.

Because once you’re on set there’s a script and there’s lines and you’ve got to get the scene shot and they are the pressures that filming always has. Really, you’re just trying to film the scenes the best you possibly can, so you sort of put aside the idea that you’re making something that is a moment in television history. The pressure of that would sort of paralyse you really.