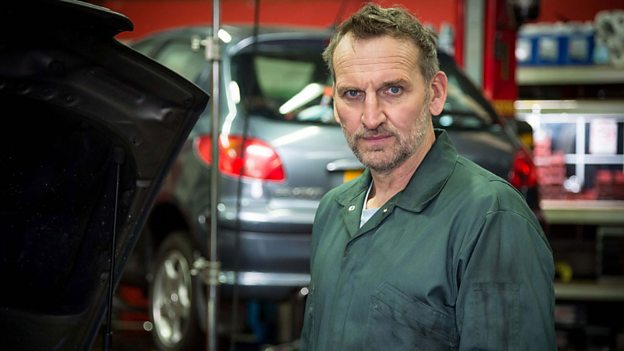 It’ll be interesting to see the story from everyone’s point of view rather than it being the typical male led drama, there are six very strong characters in this. Christopher Eccleston

The range of Danny’s writing. There was a great Thomas Hardy quote about Gabriel Oak... he says ‘on a good day, he’s a good man and on a bad day, he’s a bad man’. In short, a man of salt and pepper mixture and that’s definitely true of Greg. I think the main attraction was the arc of Greg’s journey; he’s a very different man by the end of episode three. He knows himself better at the end of this sad, redemptive tale.

Tell us about your character, Greg.

Greg is a normal working man, he runs a small business in a garage and loves his family, his children and his wife but doesn’t know her. He has failed to recognise the distress in Marie until it’s too late. Fundamentally he’s a decent man but very flawed and controlling. He’s broken-hearted about the loss of his family unit. He learns an enormous lesson about generosity and forgiveness throughout the story.

How did you perfect your Northern Irish accent?

I worked with a magician! A brilliant dialect coach called Brendan Gunn. I also spent a lot of time in pubs listening to locals. Belfast is my favourite city in the world, I love New Orleans and Glasgow but Belfast beats them all! It’s such a great city to make television. I tried my accent out with the locals, they were supportive and critical when they needed to be but it helped and I stayed in character when I was in between scenes.

Tell us about working with Danny Brocklehurst and Executive Producer Nicola Shindler?

I’ve worked with Nicola on Cracker, Our Friends in the North and Hillsborough and they’re all projects I’m very proud of, particularly, Hillsborough. They were works of great importance to me and Nicola.

It’s the first time I’ve worked with Danny. I’d seen his stuff and I know he had worked on Clocking Off, and The Driver and admired it and wondered why I didn’t get an audition!

It’s been a pleasure working with Danny. He has written a great script and I think he’s a very strong writer; it’s very unusual for a drama to be led by a woman who challenges the audience about the perceptions of femininity and why she leaves her children. Greg, Marie and Brenna are three dimensional characters neither good nor bad, and that’s down to Danny and of course to our brilliant director, Andrea Harkin.

What were the biggest challenges you faced during the shoot?

I’m an actor, my job is easy. I turn up at work, learn my lines, don’t bump into the furniture and get on with the people I’m working with. I’m a very lucky man to be able to collaborate artistically with people and get paid for it. There were no big challenges other than staying out of the pub and keeping up with the gym but I managed to do both!

What’s going to surprise people about this series?

The extreme places and situations that the characters find themselves in. It’ll be interesting to see the story from everyone’s point of view rather than it being the typical male led drama, there are six very strong characters in this and we see it from their point of view.

What did you get up to in your spare time when you weren’t filming?

I ran a lot; I ran to the great Van Morrison’s house, took a photo and ran back. I then ran to great George Best’s house, took a photo and then to the great Alex Higgins house and took another photo! The Belfast geniuses who were all in East Belfast. They were massive figures in my youth. I went to Molly’s Yard, ate and drank a lot and listened to a lot of live music. I love the place, we were very lucky to have made Come Home there.