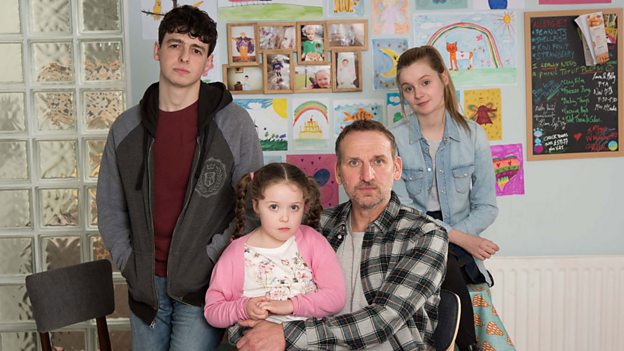 Come Home is one of the most emotional pieces I have written... it mines family disintegration and parent/child relationships. Danny Brocklehurst, Writer

Tell us about Come Home and what inspired you to write the drama.

Come Home is about how a family copes when their mother walks out, and the mystery of why she left. I'm interested in the battlegrounds that families can become. I've written about step families before in Accused and Clocking Off and I had been thinking a lot about parents who leave, why they leave and what the fallout is. I became fascinated by the taboo of the leaving mother. Fathers leave and society accepts the normality of that. Mothers leave and they are condemned. It seemed to me, rich territory for drama and a way to explore parenthood.

Why did you decide to write a drama around this subject?

For most people, family and relationships are the things that affect them most in life. I like to try and write drama that finds the extraordinary in the ordinary. When I wrote Ordinary Lies, we did twelve hours of TV without a single death. I'm proud of that because not everything needs to be a thriller or a cop show. The drama allows us to look at many things - parenthood, regret, what happens when love ends, how we get trapped into playing roles. It asks a question that is fascinating to explore - what happens if you feel you are living the wrong life?

Tell us how the series develops?

The first episode is told from the perspective of Greg (Christopher Eccleston) and the kids, nine months after Marie (Paula Malcomson) has walked out. They are trying to find a way to cope, but a new woman in Greg's life brings problems rising to the surface. The second episode brings Marie into sharp focus, and the third episode becomes about fierce protection and divided loyalties

How important was it to get the casting just right?

Vital. Greg needed to be strong, manly, but with vulnerability. Marie needed to be slightly unknowable at first, but with the ability to peel back layers. And the kids all have very specific personalities so their casting was incredibly important. We were delighted when Christopher and Paula came on board.

Was it important to film this drama in Belfast?

The show was developed with the support of BBC Northern Ireland. There was a passion to do a show set in Belfast that showed contemporary family life. There is quite deliberately no mention of The Troubles. For me, as a Mancunian, that meant spending time over there and getting to understand certain things particular to the NI, but the drama is universal in its themes.

You’ve worked a lot with RED Production Company, what makes Come Home different from any other drama you’ve worked with them on?

I love working with Red and have done some of my best work with them - Exile, The Driver, Ordinary Lies. Whilst these are all wildly different, there is a common thread - the ordinary person finding themselves in circumstances which are extraordinary. Come Home is one of the most emotional pieces I have written, because, like Exile, it mines family disintegration and parent/child relationships.

What will surprise the audience?

Aside from the turns in the story, and the surprise of where it ends up, hopefully the main thing the audience respond to will be the truth of the emotions. And the fact that it's funnier than it might sound!

What do you hope the audience will take away from the drama?

It will be different for everyone but when you watch a drama about love and family you can't help but reflect on your own life and those closest to you.

Are there lessons to be learned from Come Home?

No lessons, but I've tried hard not to provide easy answers. Because marriage and parenthood is complex and it's rarely the case that one person is in the right and one person is in the wrong. It will be interesting to see how audiences respond to the characters and whether their sympathies change as the drama unfolds.