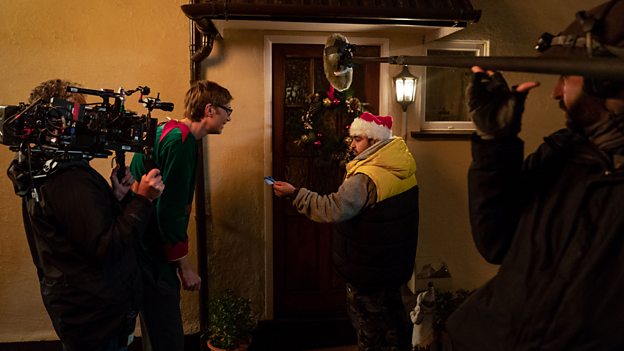 We once made a TV producer a large Battenberg which we cabbed across London from the poor bit to the rich bit (top tip there on how to get ahead in the industry).Lloyd Woolf & Joe Tucker

Click & Collect is about Andrew, an uptight father, who finds it increasingly difficult to get in the Christmas spirit. He fails to buy his six year old daughter’s main Christmas present - Sparklehoof the Unicorn Princess - only to discover, on Christmas Eve, that the shops are all sold out. Step in Andrew’s insufferable neighbour Dev - a man so enthusiastic about Yule that he’s taken it upon himself to festoon both his and Andrew’s houses in neon lights. Dev manages to buy, by click and collect, what may well be the last Sparklehoof in the UK - but here’s the rub: it’s 300 miles away. With no other options, Andrew and Dev embark on the road trip of a lifetime. For Andrew it’s a nerve-testing nightmare; for Dev it’s the beer they never got to round to.

How did you come up with this storyline? Is it based on any personal experience?

This really did happen to us! The only difference is - it wasn’t a ford, it was a millpond.

So you’ve been on a crazy road trip?

See question two. Other than that, I once drove up the west coast of North America but it was just a pleasant holiday. (Fully recommend everyone take the Pacific Coast Highway from Carmel to Mendocino).

Did you draw any inspiration for the characters from anyone you know?

The characters are loosely based on a couple of friends of ours: Andrew and Dev. There are of course potential legal implications here but we’ve covered ourselves by changing their surnames.

What made you choose Stephen and Asim for these roles?

Stephen and Asim both had that magic combination of very funny, publicly adored and available for the shooting dates.

What would you do if you ended up with neighbours like Dev or Andrew?

If you lived next door to Andrew it probably wouldn’t be too bad - you’d never hear much from him - but you might get the occasional anonymous note to trim your hedge. Dev on the other hand would be a very different beast - probably a case of embrace wholeheartedly or move county.

Could you spend that long in a car with someone like Dev?

We both practice TM (transcendental meditation) but, even with that in our kit bag, it would be a real test of trying to hold on to the notion of “future anecdote”.

Have you ever gone to any extreme lengths to get a present for someone?

We once made a TV producer a large Battenberg which we cabbed across London from the poor bit to the rich bit (top tip there on how to get ahead in the industry). Otherwise, we consider any trip to a major department store in December ‘extreme lengths’.