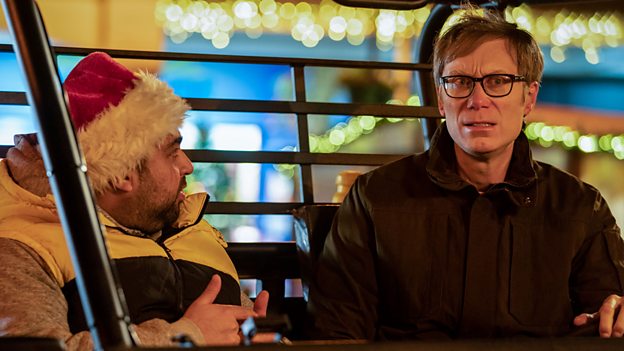 I play an uptight middle-aged man with glasses - it’s a real stretch for me.Stephen Merchant

It’s a one-off comedy film in which my character, Andrew, and his overbearing neighbour, Dev, have to take a road-trip on Christmas Eve to collect a toy unicorn for my young daughter. Everything that could go wrong, does go wrong. It’s very funny, but sweet too. Asim Chaudhry and I have a great rapport.

I play an uptight middle-aged man with glasses - it’s a real stretch for me.

Are there any similarities between you and Andrew?

I’m a bit like Andrew, in that I can be intolerant if someone rubs me up the wrong way. I like meeting new people, but I don’t want to be stuck with someone unless I’ve vetted them first, and know I like them. I dread the idea of being stuck on a long journey with a bore.

Andrew doesn’t appear to be the biggest fan of Christmas. Do you share the same feelings about Christmas?

Andrew gets antagonised by Christmas - whereas I like this time of year. Andrew is sick of the same old songs on the radio, whereas I love hearing Stop The Cavalry for the hundredth time. (I really do). He thinks we should just wait until the New Year sales to buy gifts, when they’re cheaper, whereas I understand it’s just not the same. I like seeing my niece and nephew excited about what Santa has bought them on Christmas morning.

Dev means well, but he is exhausting company. He is so child-like and over-excited.

I was excited to work with Asim because I suspected he and I would have a great rapport, and we do. He’s hilarious. I love his show People Just Do Nothing. Of all the The Office rip-offs, it’s one of the best.

Would you ever go to extreme lengths to get a present for someone?

I find the secretive nature of gift-buying very stressful. Wracking your brains trying to guess what someone might want, then surreptitiously buying and hiding it from them, then waiting nervously to find out if they actually like it when they open it. And if they don’t, they then have to hide the fact from you. So much lying and deceit involved in gift giving. I much prefer it when people tell you what they want. Even better if they buy it for themselves and just ask for the money.

I received a Lego airport when I was a kid and played with it for years. I loved creating entire stories surrounding that airport. There were hijackings, crash landings and pay disputes among ground staff. It was very exciting.

What’s the best Christmas present you’ve ever given?

It’s not for me to say what the best gifts were that I’ve given, but I think I’ve been surprisingly thoughtful over the years. I once got my dad a flight in a Spitfire, which he was thrilled about.

Have you ever been on a crazy road trip?

I was acting in a film being shot in Atlanta, in the US. One night, me and few other actors weren’t needed, so we went out to dinner. I had a Georgia guidebook with me, and on the cover was a picture of a beautiful, leafy avenue of trees. I happened to ask the waitress where it was, she guessed it was somewhere in Savannah, so on a whim the other actors and I borrowed a car and set off on an impromptu road trip to find that exact avenue of trees. We drove through the night, got pulled over for speeding by a traffic cop, sweet-talked our way out of a ticket, arrived in Savannah, found the one hotel with rooms, then next morning kept asking locals until we tracked down the exact avenue of trees. We took a picture just like the one on the cover of the guidebook, drove all the way back to the same restaurant, and showed it to our same waitress from the night before. She didn’t seem that excited. But we were very pleased with ourselves.

What are your plans for Christmas this year?

I’ll spend Christmas with family. I love cooking, so I’ll probably collaborate with my mum on the Christmas lunch. Maybe I’ll brine the turkey. I feel that’s what Nigella would do.

Have you ever had a disastrous Christmas?

I’ve been very lucky. No disasters at Christmas. Although I do remember one year my family were having Christmas dinner, and my sister and I started arguing about whether Jesus is really the son of God. My mum got cross and said: “Stop talking about Jesus! Christmas Day is not the time for it!”