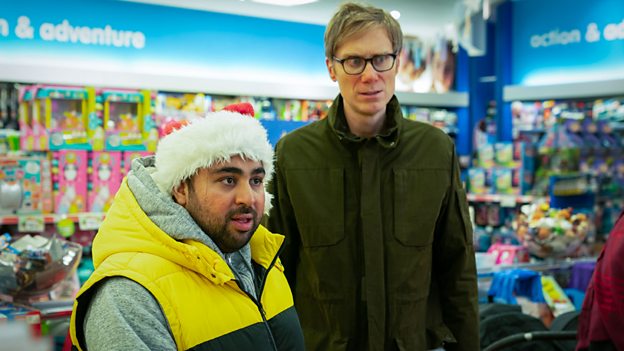 My cousin does a turkey and my uncle does a spicy leg of lamb. We have crackers and poppadoms - it's very progressive.Asim Chaudhry

Dev is one of the most annoying people you will ever meet yet also one of the most loveable. It’s a weird combination but ultimately, he is a loveable loser and his intentions are always good.

Did you draw any inspiration for your character from anyone you know?

I had a neighbour who literally lived opposite me in an apartment complex. One of my deliveries got sent to his flat and he knocked on my door to give it to me. As he opened the door, he recognised me off the telly and his face lit up. This was the start of my real life Click & Collect experience. He could see me from his living room window, so every time I was in my kitchen he would wave to me. It was all very intense. I started putting my blinds down to avoid him. He was a lovely guy but I did seriously consider moving.

Do you share any similarities with your character, Dev?

Definitely. I can be VERY annoying at times but I’m somewhat self-aware (only somewhat).

Working with Stephen was a joy. He’s one of my comedy heroes and he became like the really tall, white, Bristolian brother I never had!

Have you ever gone to extreme lengths to get a present for someone?

My ten year old sister wanted one of those Hatchimals a few years ago and I remember getting a £65 Uber in rush hour to go to an Argos. It took me three hours. It’s like Click & Collect but like a really boring, lazy version.

How would you cope with spending that much intense time with someone as annoying as Dev?

I avoid intense, annoying people at all costs. If I see someone I know who annoys me I will go out of my way to avoid them. I will miss trains and buses, I am that committed.

The best Christmas present I’ve ever received was a WWF ring with Bret The Hitman Hart and The Ultimate Warrior. I would spend hours playing with myself, not like that. I would create intricate back stories for the toy figures. I was a weird kid.

What’s the best Christmas present you’ve ever given?

The best Christmas present I’ve ever given was that bloody Hatchimal for my sister. She played with it for a week and then she was done with it! That’s three hours of my life I’ll never get back.

Have you been on any disastrous road trips before?

I regularly tour with Kurupt FM and I’ve had many hellish road trips. The worst gig we ever did was in Swansea. We showed up and there were 40 people at this pub. They didn’t know who we were and the mics didn’t work. I had to do an impromptu stand up set and got a drink thrown at me. The promoter didn't even pay us and when we left the venue and on to the street there were three police cars, two fights happening and a woman crying on a bench. It looked like a renaissance painting.

What are your plans for Christmas this year?

I have a white side of my family, so we have an Asian/British fusion Christmas. My cousin does a turkey and my uncle does a spicy leg of lamb. We have crackers and poppadoms - it's very progressive.

What’s the best Christmas you can remember and what made it so special.

The best Christmas ever was when I was quite young. I really wanted a Sega Saturn, I was moaning about it for months. My dad, who worked as a taxi driver at the time, did a night shift from 9pm-6am to earn some extra cash and when I awoke there was a Sega Saturn under the Christmas tree!