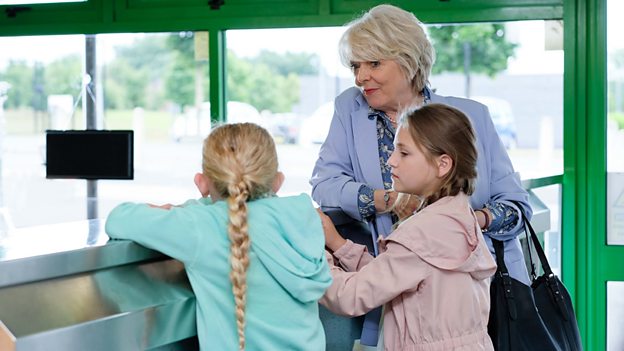 Once you’ve played a part like this, it stays with you.Alison Steadman

Tell us about Mary… what does the film have in store for her?

Initially we see the character as very lively - Mary is a lady who is full of life. She loves her grandkids and spends a lot of time with them. She’s a fun granny to be with. She sends them up and pulls their legs. She’s a very bright, strong lady. And then the rug is pulled right from under her in a flash.

The terrifying thing for me is that it could happen to any of us at any time… and when it does happen, as a human being you have no control. There’s nothing you can do to help yourself. You are totally dependent on medical staff and doctors and family. Suddenly this woman who is full of life and zest and chat… she can’t speak. She can’t communicate.

What attracted you to the film?

Several things… Jimmy McGovern… who is a brilliant writer. Sheridan Smith… who is such a talented actress… filming in my home town… playing a Liverpool woman, which I don’t do very often. It ticked all the boxes.

I’ve never worked with Jimmy McGovern before. He just gets under the skin of the characters. They are so believable. His stuff is always so heart-warming yet heart-wrenching. He ticks all the boxes. Never having worked with him before, when it came up I knew I had to do it. I knew it would be so great. He and Gillian Juckes have written the most wonderful script.

I went from what was in the fantastic script and I also spoke to a doctor who specialises in dealing with people who have had a stroke. I had a long chat with him.

I also know someone, a contemporary of mine, who had a massive stroke about six months ago. It’s so hard to see how it can change someone’s life entirely. Just to be in the stroke unit and to observe people… I chatted to quite a few of the patients or just exchanged smiles… I saw what was going on in the unit. That was really helpful to me.

It really makes me appreciate that at the end of the day I can get dressed, put my lipstick on and go and have a gin and tonic - as some people aren’t so lucky.

It’s not an easy role to play… did you have any reservations about taking it on?

I didn’t have any reservations. I knew it would be a terrific challenge. I didn’t have reservations but knew it would be something that I was going to really have to work at to get into Mary’s brain and understand fully what had happened to her, in order to understand what she was going through. In that sense it was challenging but it was also good to know that I had this challenge and that I could achieve it.

Sheridan is 100% committed. There’s no nonsense with her. She really goes for it. She’s so lovely because we have a lot of emotional scenes together that were very taxing. When we finished a take, if it had gone well she would take my hand and grip my hand - she wouldn’t say anything but it was great to have that support. We felt that we were really communicating together. It was so good to have that.

Did you talk about what your characters relationship would have been like before the stroke?

Yes - we had rehearsal time. We knew that the three of them (Jenny, Mary and Sinead Keenan’s character Claire) were strong characters - particularly Sheridan’s character. Perhaps it wasn’t always an easy relationship. Life was tough for them all… relationships, bringing up kids and one thing or another… But you knew that they were supportive. When this sort of thing happens, suddenly it shines a spotlight on life and what’s important. I think it’s great for their mother to know that those two girls were going to support her and be there for her.

Is there anything that has stayed with you since filming?

Definitely. Once you’ve played a part like this, it stays with you. In life we hope that we don’t get ill and of course we don’t dwell on things like that because you’ve got to carry on living. I’m touching wood as I say this, but I’ve got a very active and happy life - and I’m very grateful for that. But it does make you think. When I do see people who have experienced similar to Mary or are having difficulty communicating, I think I have even more empathy than I did before. It has really made me think.

What do you hope viewers will take from watching Care? Why should viewers tune in?

Like any good drama, it will be compelling but it will also raise awareness and raise consciousness. It will increase people’s empathy. It will make people realise that they should appreciate life and realise if this does happen in life we should give people the best chance. Most health services do their best, but they can’t always do what they want to do because they have not got the resources. Care homes have not got the resources to do what they should be doing. I think raising awareness of that is very important.