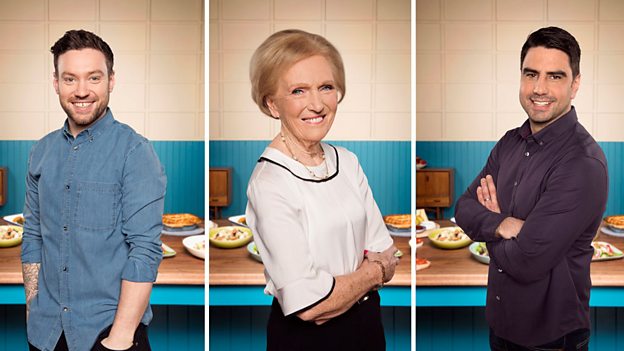 The judging trio bring a wealth of different cooking experience to the table, with a variety of expertise between them:

Queen of the home kitchen Mary Berry continues to inspire generations of cooks with more than 75 recipe books to her name. Mary is returning to her first love and her know-how in the home kitchen is beyond question, as she takes the role of lead judge.

Produce expert and former market trader Chris Bavin has worked in all areas of food: importing, wholesaling, retailing, service & catering. Chris co-founded his retail business ‘The Naked Grocer’ and has since gone on to TV success fronting a range of shows on the BBC, including Eat Well for Less.

One of London’s most prominent and creative chefs, Dan Doherty is currently Chef Director at one of the city’s most celebrated restaurants, Duck and Waffle. Having started his career as a graduate of The Royal Academy of Culinary Arts, Dan is known for his innovative, playful and indulgent cooking style, with a number of awards and accolades now under his belt. He recently released his second book focused on the recipes he cooks at home for family and friends.