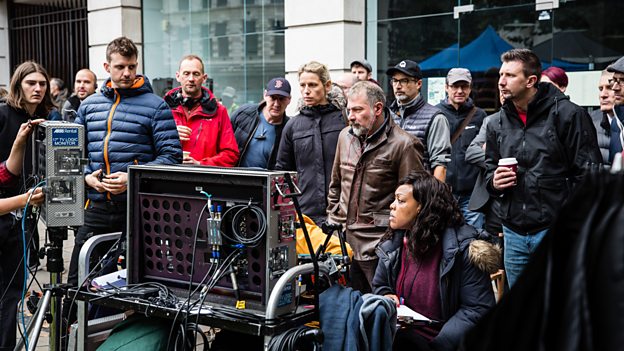 One of the characteristics of Line of Duty and Bodyguard is that characters can have a bit of good and evil in them. They can be positive characters with very real flaws that lead to dramatic consequences.Jed Mercurio

Where did the idea for Bodyguard come from?

It started out as a desire to set something within the political world - and find a different way into that. With my experience on Line of Duty I was aware of the different specialisations within the police, so the idea of the specialist protection unit, which looks after politicians, diplomats and royalty, felt like a really good area in which to set the story.

Can you tell us more about the story?

It’s built around the character of David Budd, played by Richard Madden. David is someone who had first-hand experience of the traumas of war and has difficulties in his home life as a result of that. The show’s premise is that we don’t know a whole lot about David’s motivations. He would appear to be a very highly respected and very proficient PPO assigned to Keeley Hawes’ character, Julia Montague, who is the Home Secretary. But the idea is that actually, rather than protecting her, he may be involved in some conspiracy to do her harm…

This assignment to look after quite a hawkish Home Secretary brings back the traumas and the conflicts that he feels about the experiences he had overseas in the army.

Can you tell us more about the other characters?

The political world within the story is something that really surrounds Julia Montague. As a high-ranking politician, she’s obviously at the level where everyone is looking over her shoulder and also looking at the top job of trying to get into number ten. Julia’s deputy is Mike Travis. The Chief Whip, Roger Penhaligon, is her ex-husband - they had a bitter break up. She’s quite an ambitious figure - someone who is probably more on the right wing of the party in terms of her attitude to security. Our story has something called RIPA ’18, which is a bill that Julia is trying to get through the House of Commons. It is the Regulation of Investigatory Powers Act for 2018 - something which is intended to beef up the surveillance powers of the security services.

Gina McKee plays Anne Sampson, the commander of SO15 - the counter terrorism branch. She’s a very dedicated officer - but she’s also someone that’s quite hard to know. It does appear at times that she has her own political agenda…

It’s hard to know who to trust in Bodyguard, isn’t it?

I think it’s very important, if you’re doing post-watershed drama for a discerning audience, that you make it distinctive. A lot of TV does go for heroes and villains - and for very demarcated characters. One of the characteristics of Line of Duty and Bodyguard is that characters can have a bit of good and evil in them. They can be positive characters with very real flaws that lead to dramatic consequences.

One of the centrepieces of the story is the terrorist threat and unfortunately that’s something that we’ve all learned to live with in our big cities. It’s very contemporary and obviously we want to handle that in the most sensitive way, but also in a way that does feel authentic. We have a number of big action sequences within the series and that’s really part of the appeal of it, I hope.