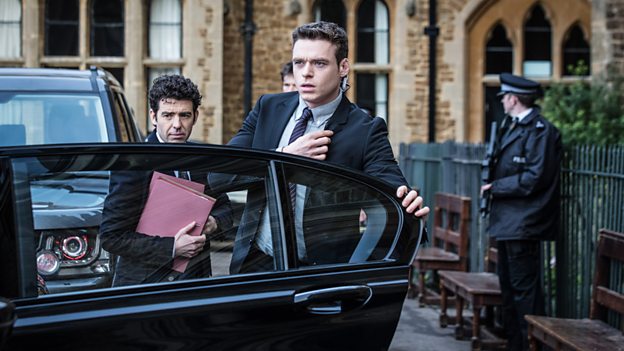 There’s a great juxtaposition between him wanting to do his job to the best of his ability, but also having a real resentment for the people he has to work for.Richard Madden

Where do we first meet David?

We first see David as a father - at the start of episode one, when he’s sat on a train with his two kids who he absolutely adores. I got to be able to play something there that gives the audience an insight into David as a man off duty, before he is thrust into a situation with a potential terrorist attack, and we see a ‘wall' go up when he becomes a PPO (Personal Protection Officer).

I was fascinated with David being a series of different characters within himself. He has a sense of duty and also a political history, because he’s a former soldier who’s been in Afghanistan and has been in Iraq. He has the scars to prove it - both physical and mental. David’s a man adjusting to civilian life and dealing with some of his own mental health issues. And he is still deeply in love with his wife, Vicky, who he’s separated from, and he's guilty and regretful over how their relationship has panned out.

You mention Vicky - how was working with Sophie Rundle?

I really enjoyed working with Sophie. The scenes between David and her character Vicky show David at his most vulnerable, but also at his most vicious. When he’s looking at Sophie, his wife, David’s looking in a mirror at all of the things that have gone wrong in his life and how he wants to fix them. But he’s still incapable of doing so, because he’s not engaging with actually what is going on with him. He’s wrestling his demons and he thinks he can do that alone, whilst trying to function in a world that’s quite dysfunctional.

What is David’s relationship with Keeley Hawes’ character, Julia Montague?

When David is assigned as Julia Montague’s PPO and gets put into the position of looking after her, it’s another opportunity for him to be a knight in shining armour. One thing he can do really well is protect someone and be this soldier, because he’s not let go of where he was previously. In this case there’s a great juxtaposition between him wanting to do his job to the best of his ability, but also having a real resentment for the people he has to work for. In his army career he has first-hand dealt with the decisions made by people like the Home Secretary.

How was working with Keeley Hawes?

I had the best time working with Keeley. She is crazily professional and brilliant at what she does. As I say, my character is a very lonely, isolated man and I was very thankful from the very beginning to have Keeley there as my friend and companion throughout.

And you’d worked with Jed Mercurio before, hadn’t you?

We’d previously worked together on Lady Chatterley’s Lover - something completely different! What's great about having Jed on set is that he’s so creative and responsive and collaborative.

Why should viewers watch Bodyguard?

From the very beginning - and I really mean that, because we have the most incredible opening sequence - it’s a really exciting and compelling series. And I think it feels completely real in a world where everything in this show technically - and hopefully, touch wood, it won’t - could happen. And it’s a great ensemble piece too, where over the weeks you get to know all of these different characters, who each have their own struggles and agendas as the show ploughs through. I loved reading it, I loved making it, and I hope people love watching it.