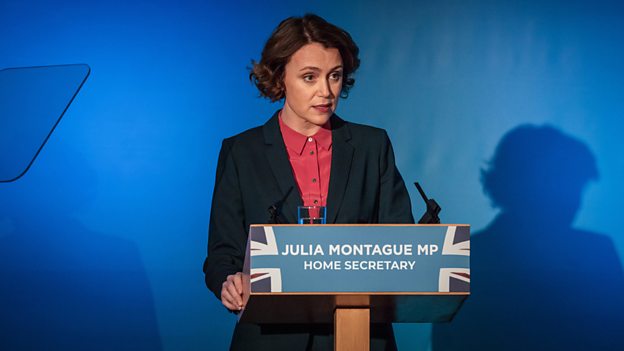 You open a Jed Mercurio script and it’s like getting aboard a rollercoaster.Keeley Hawes

What is Bodyguard about? Who is your character?

Bodyguard is a political thriller - and it really is a thriller, right from the very first minute. You open a Jed Mercurio script and it’s like getting aboard a rollercoaster. And because much of it’s set in Westminster, the thing I really love about it is that it’s like looking behind the curtain into another world that you almost never have a chance to see up close.

It’s about David Budd, the bodyguard of the title, who becomes Julia’s personal protection officer. Julia is a hugely ambitious woman and incredibly bright. She got into politics for all the right reasons… to make the right changes. She’s strong but she’s also flawed. She’s kind of damaged - she’s divorced, vulnerable, and she’s in such a tense and high-power, high-profile job as a cabinet minister. You do get this sense that they just don’t ever stop. For the Home Secretary in particular there’s always so much in the news that concerns them, and it’s just relentless. And also they are on show the whole time.

Politicians aren’t ever going to be popular with everybody. It becomes very personal. It is the toughest job - I wouldn’t want to be a politician. You just can’t win!

Julia is very good at public speaking, so I watched an awful lot of politicians. There’s a very particular way of giving speeches, and actually speaking to people and giving interviews that a lot of politicians have in common. Many don’t seem to have conversations with people - they just keep telling you their point of view.

Julia has a strong look - what is her costume like?

My main prop is my red box, which the Home Secretary has to keep with her at all times. And someone thought it would be a good idea to make it out of solid wood! So I spent a lot of time groaning as I pick it up and put it down again. You also have your handbag and other things with folders in them, so your arms are aching by the end of it!

What are your most memorable moments from set?

There was quite a funny moment for me when I realised that I’d actually worked with Richard when he was a child! On the film Complicity, in 1999. He’s brilliant at his job and he takes it very seriously, but at the same time we had such a fun time. There’s a scene where we’re coming down the stairs and I’m being introduced to a lot of people, and all the way down those stairs on every take I could just hear him trying not to laugh, which in turn set me off.

During one of Julia's speeches we had a few actors to protest as part of the scene, but then an actual protest kicked off for real outside! It was some students throwing flyers from a balcony and shouting down the hallway next to where we were shooting, so we couldn’t get our scene done. Someone, one of the production team, had to have a polite word with them - “come on now, that’s enough of that!” - and they then came down and picked them all up again. It was all very British.