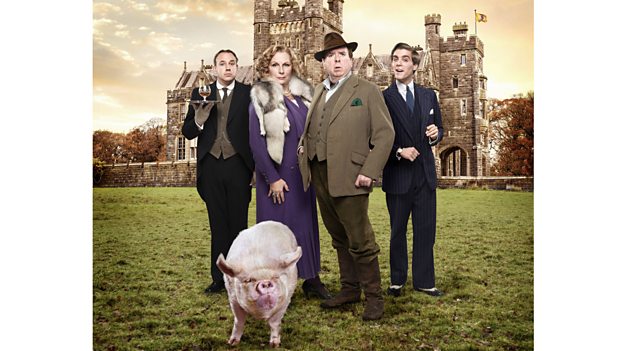 We are delighted to return Blandings to BBC One. Guy's scripts are comic, clever and full of charm. We had the best time filming this series."Kristian Smith

Vine (Not Going Out) takes on the role of Beach, Blandings' long-suffering and loyal butler, in this seven-part series adapted from the Blandings Castle books. He joins Timothy Spall (Harry Potter Films, The King’s Speech) and Jennifer Saunders (Absolutely Fabulous, Jam & Jerusalem) as they reprise their roles as the absent-minded Lord Emsworth (Clarence to his friends) and his indomitable sister Connie, alongside Jack Farthing (Da Vinci’s Demons) as Clarence’s feckless son, Freddie.

Kristian Smith, BBC Comedy Commissioning Editor, says: “We are delighted to return Blandings to BBC One. Guy's scripts are comic, clever and full of charm. We had the best time filming this series. It's so heartening to see a cast not only expertly realising these comic creations, but having such fun doing so. Timothy, Jennifer, Jack and Tim are the perfect core cast, bouncing off each other beautifully. And, as with series one, we have attracted a roll call of our finest comedy performers in guest roles. This is unmissable, timeless family comedy."

Damien Timmer, executive producer for Mammoth Screen, says: "Blandings was one of the top-rated new comedies of last year and we're thrilled with this second series - it's bigger, better and funnier than before, with Timothy Spall, Jennifer Saunders and Jack Farthing back on sparkling form, and Tim Vine fitting in perfectly as the long suffering Beach. We also have some of the best of British comedy talent making guest appearances as some well-loved Wodehouse characters.”

The series is set in 1929 in the fictional Blandings Castle, home to a chaotic family struggling to keep itself in order. This time around Clarence, who wants nothing more than to spend time with his precious pig, The Empress of Blandings, faces the prospect of being committed to an asylum thanks to an obnoxious house guest, his sister Charlotte, disgrace at the hands of his brother Galahad, a leather-gusseted religious maniac and visiting Hollywood film crew plus subterfuge, kidnap and rivalry with Stinker Parsloe in the race for the biggest pumpkin and fattest pig.

Writer Guy Andrews says: “As ever, all Clarence wants is to be left in peace with his beloved pig. But events conspire against him as never before. His incorrigibly rakish brother Galahad is on the prowl with a glittering monocle and a case full of shocking memoirs. Other guests and impostors include a voracious Hollywood producer, a dancing saxophonist secretary, Clarence’s frankly terrifying sister Charlotte and - worst of all - the poker-wielding Duke of Dunstable, the rudest man in Shropshire. Will tranquility ever reign at Blandings Castle, even for an afternoon?”

Talking about adapting Wodehouse's words for the new series Guy, with a touch of Wodehouse humour, explains: "It’s a rare pleasure to be allowed to pile great swathes of Wodehouse’s dialogue at the actors’ feet, unfiddled-with. In the normal course of duty, a screenwriter devotes vast energy to the task of stealing material from Wodehouse and then trying to disguise the theft - altering an adjective, a pattern or a rhythm - in order to pass the stuff off as one’s own. The result never works. The original is always better. So actually to be encouraged to lift passages wholesale is a seriously sinful pleasure.

"Moreover, to be blessed with a cast so outstandingly bright, witty and articulate, and magisterial directors so scintillatingly in tune with the Wodehousian universe. I mean, crikey. What in the world - (briskly sluices his martini in one, then radiates convivial bewilderment) - could be more agreeable?"

The series is written by Guy Andrews (Lost In Austen, Absolute Power) who is also executive producing. The producer is Matthew Mulot (Little Crackers, The King Is Dead) and the directors are Mandie Fletcher (Jam & Jerusalem, Absolutely Fabulous) and Geoffrey Sax (Christopher And His Kind, New Statesman).