Offering more coverage than ever to audiences 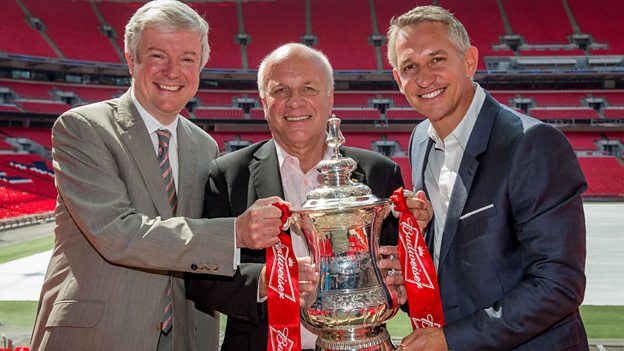 The FA Cup returns to BBC Television for the 2014/15 season, after a six-year absence, with 16 live matches and comprehensive highlights of every round of the competition. Exciting plans are in place, including access all areas coverage, interactive Final Score programmes, Football Focus roadshows and a new Monday night cup draw, which is also being taken around the country.

In a first for FA Cup coverage, the BBC will be giving extra prominence to the early rounds of the competition, placing lower league clubs in the spotlight. In the first and second rounds there will be eight matches moved to a new Sunday slot at 2pm, as part of an interactive Final Score, with goals and key moments shown to the BBC One audience as they happen.

The extensive BBC digital offering will include a total of 16 games streamed live on the BBC Sport website, via the online Match Centre and there will be a special FA Cup Catch Up service providing downloadable highlights at every stage of the competition.

The FA Cup has a longstanding relationship with BBC radio and 5 live will continue to provide all the news, goals and analysis from the start. There will be live commentary of selected first and second round matches on 5 live sports extra and 5 live will pick up fully from the third round onwards.

In addition, local BBC regional radio will chart the route to the first round proper, as hundreds of amateur clubs aim to earn a match with a league team.

As part of their FA Cup coverage, the BBC , along with BT Sport, will also turn the competition's key month of January in to ‘FA Cup month’, which will see both broadcasters give enhanced prominence to the tournament on their channels.

Get Inspired is the BBC’s campaign to encourage more people to get active. Its role is to use the BBC’s unique reach to connect audiences to participation initiatives run by sporting bodies.

Get Inspired will be working with the FA as part of the BBC’s FA Cup coverage.