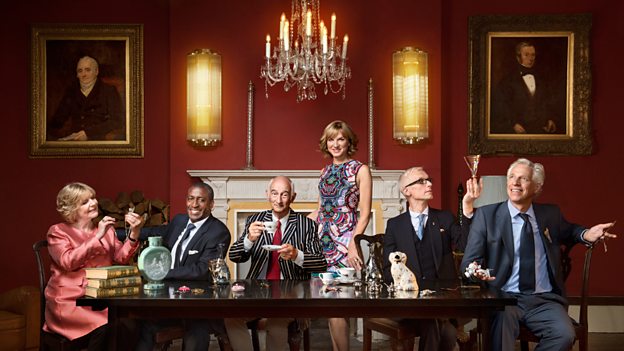 1) An important lost work by artist Richard Dadd came to light at the Roadshow in 1986. It was eventually sold to the British Museum for £100,000.

3) A family tea pot brought in by avid Roadshow fan Norah Ambrose during the programme’s early years proved a life changing moment when she bought her council house on the proceeds of the sale.

4) Only one expert remains from the first series; Roadshow veteran David Battie has attended hundreds of shows.

5) A rare Leica Luxus 2 camera brought in to the Roadshow sold recently for an eye watering £385,000.

6) Ozzie the Owl is our most famous ceramic to come to light at the show. The owner Pat sold it and used some of the proceeds to support a charity helping street children in Brazil.

7) Perhaps the spookiest object to be brought in to the programme was a voodoo type doll which was pushed through the letter box of a suffragette supporter at the turn of the 20th century. It is now in the collection of the National Museum of Wales.

8) The Roadshow has featured many celebrity owned objects; a diamond bracelet from Rita Hayworth, Marc Bolan’s guitar, even a loo roll rejected for use by the Beatles. A jacket once worn by JFK and valued on the show for £2-300,000 will come up for sale in the USA soon.

9) The most valuable painting to be seen was a work by war artist William Orpen which he had disguised by signing it backwards.

10) The story of how a packet of cigarettes was given to the POW owner by Rommel remains one of the most remarkable war stories told at a recent event.

11) Legend has it that the greatest let down in Roadshow history was the evaluation of a glass bottle which the owner had paid handsomely for but was in fact a supermarket olive oil bottle. The embarrassment was not shared on camera.

12) A collection of jewels found on a rubbish tip elicited one of the best reactions to valuation ever when Mum said to her son: “Find yourself a girl and you can have these”.

14) Roadshow experts have interesting other lives. Amongst the team are a former long haul airline pilot, rock journalist and celebrity hairdresser.

15) Perhaps the most graphic objects brought to a Roadshow were two ceramic bowls that had been melted after the nuclear bomb was dropped at Hiroshima.

16) The highest audience figure for an Antiques Roadshow was 15 million in the 1990’s. Even today a loyal 6 million regularly watch the show.

17) Between 15 and 20,000 items are scanned at each show by our experts from which 50 are filmed for inclusion in the two shows made at each location.

18) “To Una who worked like a slave”; that’s the dedication written by Ian Fleming to his secretary who typed his first two Bond books brought proudly by her to a show. Value 60k

19) A small painting found outside a rubbish tip fascinated expert Philip Mould when brought to the Althorp show. The investigation it prompted kicked off our sister series Fake or Fortune.

20) The first outdoor show was at Heveningham Hall in 1993. Before that town halls and sports halls hosted the shows.

21) Roadshow veteran Paul Atterbury’s favourite piece seen on the show is the camera used to take the fake photos of the Cottingley fairies back in 1917.

22) The first Roadshow to be filmed in High Definition was Arundel Castle back in 2006 making the Roadshow the first factual programme on BBC TV to pioneer this technology.

23) There are six countries who have bought the rights to make Antiques Roadshow. Sweden leads the field with 25 years of broadcasts of their own show, whilst the USA are not far behind with 20 years in production.

24) The maquette of Anthony Gormley’s Angel Of The North stunned viewers when it was valued at over £1,000,000 at a show in Gateshead.

25) The oldest dolls seen on the show were filmed recently at Tewkesbury Abbey dating back to 1705.

26) The busiest Roadshow was held at Hopetoun House near Edinburgh. So many people arrived that the traffic seized up on the Forth Road Bridge much to the frustration of the local police force. We estimated 5,000 arrivals ...but we stopped counting!

27) A lost jewel by arts and crafts designer William Burgess came to light after an appeal on the show. The lucky owner sold it for 31,000.

28) A painting brought in by a vicar was spotted by Fiona Bruce who had the hunch it was by Van Dyck. Extensive investigation and restoration eventually proved she was right.

29) Perhaps the most moving object seen on the series is a small ring that was kept hidden under the tongue of Zedenka Fantlova who survived four concentration camps in World War II.

30) A chest brought in to Castle Cawdor was eventually proven to have belonged to Queen Anne and was returned to Hampton Court where it was originally used.

31) Recent history was brought vividly to light when a Tombola, complete with hand written cards by many Conservative MPs, was brought in to a recording. It had been found in the wreckage of the Grand Hotel in Brighton.

32) Graffiti artist Banksy’s donation to a Bristol Boys Club was valued by Rupert Maas and was later sold for more than £400,000 to a private collector.

33) A special programme in which survivors of the Holocaust brought in fragile artefacts from their lives in POW camps moved and shocked many viewers. Most reviled was a “game” called “Jews Out” made for families before the outbreak of war.

34) Lots of objects brought in have been found in strange places including diamond jewels found sewn in to an upholstered chair and two important paintings discovered by the new owners of a house in their loft.

35) The most bizarre bring in ever is probably the photograph of an elegant lady from the 1930s. “And why this picture?” enquired Michael Aspel. “Oh she ran over our dog outside Buckingham Palace,” replied the owner.

36) Arthur Negus is fondly remembered as the grandfather of the Antiques Roadshow. Curiously some visitors today mistake Henry Sandon for him.

37) Our most famous find has to be the collection of silver brought in to Crawley. Viewers were agape as more and more pieces were pulled out of bags of outstanding quality and value - all of which was a big surprise to the family who brought them in.

38) Lawrence of Arabia’s wristwatch was a remarkable find from the 1990s. The owner, unaware of its significance when he brought it in, went on to sell it for £34,000 to a collector in Geneva.

39) And the treasures keep coming, including a painting lost to art world knowledge for 80 years when a rare picture by Alma Tadema turned up at a show last year. It has since gone on an international tour.

40) The Roadshow has visited numerous international venues including Canada, Australia and major European cities. Even at the Australian events the Roadshow’s most dedicated follower, John Dallimore, clocked up the 9,500 miles at attend.