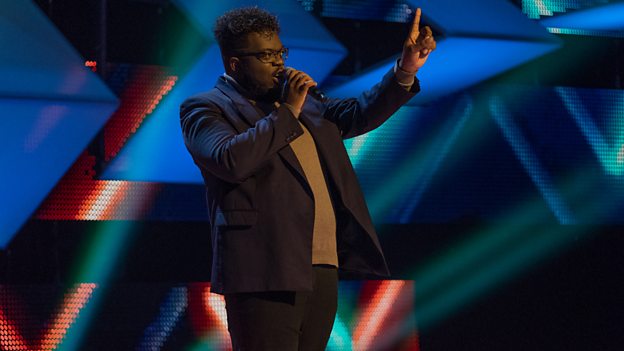 The first time singing solo on national TV and there was no hype, no sob story, just me and a mic.James Thompson

Category: BBC One; Entertainment
Song that got you to the final:
Ordinary People by John Legend

I love R&B firstly. But I have a very loud personality; so I wanted to show the 100, and those that know me, that I know how to take it slow. Plus, I felt like it was a song I could make my own.

Like two people living in one body. Overwhelmingly excited, and a nervous wreck. I kept saying to myself remember this and remember that and don't be nervous. But above all I felt very grateful. The first time singing solo on national TV and there was no hype, no sob story, just me and a mic.

It was definitely tense! However, I would also describe the atmosphere as expectant. Maybe I'm the only person that felt that, but it felt like people were expecting something to take their breath away.

Yep! I had some doubts about whether I had made the right song choices. That's what had me biting my nails.

I did - they are an amazing and talented group of singers. I really enjoyed singing with them in the finale. Such a pleasure to be part of the All Together Now Finalists group. We have a group chat that we all still talk in.

Best memory from taking part in the show.

Looking up towards the end of Ordinary People and seeing 100 people stood up. That was my highlight of the entire experience.

My favourite artist of all time is Stevie Wonder. That's not just because of his singing voice, and the many factors that make his voice amazing, but also his musicality, and his song writing is impeccable.

Rob is such a funny guy, so it was great to have him and Geri's personality fits the show and the rest of the 100 perfectly.