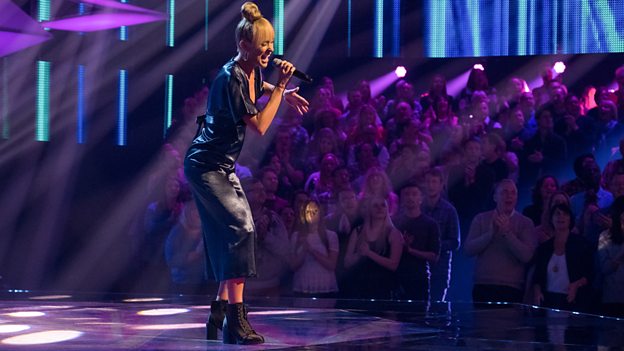 Rob was so funny, and is so laid back. Geri was lovely - I was such a massive Spice Girls fan. I even had a Geri doll.Jodie Steele

Category: BBC One; Entertainment
Song that got you to the final:
I Wanna Dance with Somebody by Whitney Houston

Three years ago was the first time I did the stripped back version of Dance With Somebody at a gig - it went down really well, so I thought it would be a good choice for All Together Now. I thought it would get people on their feet, plus I could put my own stamp on it.

Did you watch your episode, what was the response from your family and friends?

I didn’t actually tell my family until two minutes before, and then I was like: "I think you had better turn the TV on." My mum started texting everyone she knew. It was such a surprise for them. But I wanted to know what they really thought about the show, and about me.

Yes, definitely. I wasn’t sure about my song choice, and I had to go on first…

Yes, they are all lovely, and we have all been in touch, messaging each other week by week to wish each other well.

Best memory from taking part in the show?

The group hug at the end when the winner is announced.

Celine Dion - all day, every day.

Great. Rob was so funny, and is so laid back. Geri was lovely - I was such a massive Spice Girls fan. I even had a Geri doll.