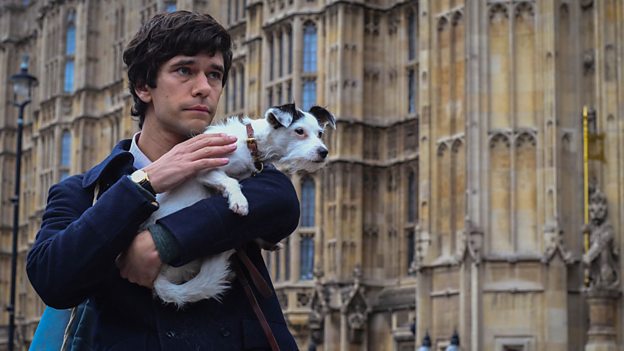 I loved the story – I was fascinated by the story. I’d never heard of it. I liked the way it didn’t shy away from the absurdity and almost farcical nature of this relationship and what ensued from it.Ben Whishaw

Can you tell us about your character Norman?
Norman is very young when we first meet him at the beginning of the story. He meets Jeremy Thorpe, who is a Liberal MP, and he is quite taken by him. He is quite impressed by his charisma and status. Norman is in a dire situation - he has nowhere to stay and Jeremy takes him in. Norman survives on his wit and imagination – and the sympathy of other people. But if there’s one thing that I feel about Norman Scott – Norman Josiffe – is that he’s a really strong person. I think he’s really tough.

Did you do much research? Did you meet Norman Scott?
Yes, I did. I met the real life Norman with Stephen Frears in London shortly before we started shooting, which was really fascinating to get his version of events and to chat with him. He’s a very funny, clever, naughty guy. He’s very delightful in person. That was really important because so much of what happens to him in the story of the film is quite dreadful. But he has a real resilience and a humour, which is very charming.

Can you describe the relationship between Norman Scott and Jeremy Thorpe?
On the one hand it’s quite an unbalanced relationship, in that Jeremy is very powerful and has a certain status and stature within the world and Norman doesn’t have any of that. But on another level, I think they are extremely well matched. They are both sharp, clever and funny and quite driven individuals. I feel like they meet their match in each other.

What drew you to this project?
I got sent Russell T Davies’ scripts and I loved them. I loved the story – I was fascinated by the story. I’d never heard of it. I liked the way it didn’t shy away from the absurdity and almost farcical nature of this relationship and what ensued from it.

Have you read John Preston’s book?
I read John’s book as preparation for the film and I keep it with me actually. It’s a very helpful book because the story covers such a long stretch of time and John is brilliant at filling in all the gaps. And obviously because Russell has adapted it from there, it has the same deadpan humour and the same flavour as the drama.

How would you describe the tone?
I think it’s a dark comedy or a black comedy in a way. But it also flirts with something sadder and even tragic at times.

Was it difficult to separate the funny moments from the underlying seriousness of what’s actually happening?
I always think that all you can do is play it really honestly and completely as the character sees it. If it’s funny, it will be funny because of the truthfulness. I feel like we don’t have to do anything to make it funnier. It’s funny in the way that life is sometimes absurdly funny and strange. You couldn’t really invent what happened – or you might not believe it if you did. I always love serious things that have surprising humour and humorous things that then surprisingly have tragic or other emotional qualities to them. I love that mixture.

What’s it been like working with Stephen Frears and Russell T Davies?
I have admired so many of Stephen’s films for so long, there’s an ease or effortlessness about what he does. It’s so instinctive for him – how to tell a story and how to think through the camera as he does. I feel like he’s always editing the series in his head. And I have been a fan of Russell’s writing since I was a teenager. His writing is wonderful, because you can just trust it. Every comma and every full stop has been considered. It is always straddling humour and tragedy – often within a scene. That’s a real gift.

What’s it been like working with Hugh Grant?
I have loved working with Hugh, he’s wonderful. I have admired his acting for so long. I think he is such a beautiful, delicate comic performer and it’s brilliant to see him play this role, which has this slightly darker edge to it. I just think he’s wonderful. He’s so inventive and free – but so thoughtful and won’t let up until he’s got it exactly how he wants it. I really respect that.

What have you discovered about the scandal that has surprised you or changed your perspective?
I suppose I can see if I were reading about the story in a newspaper or reading the book that my sympathy would be with Norman, and as an actor my sympathy is with Norman – but weirdly I also do have sympathy for Jeremy, as a gay man who could not live that life honestly and who suffered awful tragedies. I feel sympathy for everybody in the story. I can see things from everybody’s perspective. Both men were grappling with their own troubles, and their own minds and demons.

What did you think of Hugh’s transformation?
It’s amazing what the change of eye colour does. Hugh’s got those beautiful blue eyes and Jeremy had brown eyes. It really transforms Hugh’s face. Of course there’s also this strange parting which is swept over that Jeremy famously sported his whole life. There’s an inner change as well. Hugh just looks different. Jeremy had this quite gaunt, sunken look and Hugh’s got it too.

Are you an animal person? Norman Scott seems to be. Did you have to deal with lots of animals on set?
Yes I love animals, I’ve loved that part of it. There was Bella who plays Mrs Tish, who is the first dog that Norman has and she is a very clever little dog. Very well behaved and a very good little actor – for the most part. She gets a bit sleepy at a certain point of the day…

And then there was Pinocchio, who played Norman’s horse, who was remarkably clever and very experienced. Whenever he heard the word “action”, he was off! He was amazing.

And then there was Rinka – the Great Dane, which was a more complicated experience, I think it’s fair to say. We actually had three Rinkas in the end. We had Darcy, who lasted a morning I think. We had Manon and then we had Olive. The Rinka you see in the story is actually three different dogs. Great Danes are very beautiful animals, but they don’t like rain and they don’t like doing the same thing twice. But who does? I had great sympathy for them. They are very beautiful. Very exquisite animals.

How was the filming experience with the horse?
It was great. Pinocchio got a bit carried away. There was a mare in a field. She was getting very excited that Pinocchio was coming, so we had to film that part quite quickly because he was getting a bit randy, I think. Other than that, he was incredibly professional.

Could you talk through some of the scenes with the Great Danes?
The biggest difficulty is that most of the filming with the Great Dane had to be in the rain. When you film rain on film, it’s like a tropical downpour because it doesn’t register on camera. So it’s not just a drizzle, it’s thundering rain. The Great Danes did not like the rain. We needed the dog to be quite animated and running around, but the dog slunk to the ground or tried to get back in the car or out of the rain. It was trying, but I would have forgiven it anything because it was so beautiful.