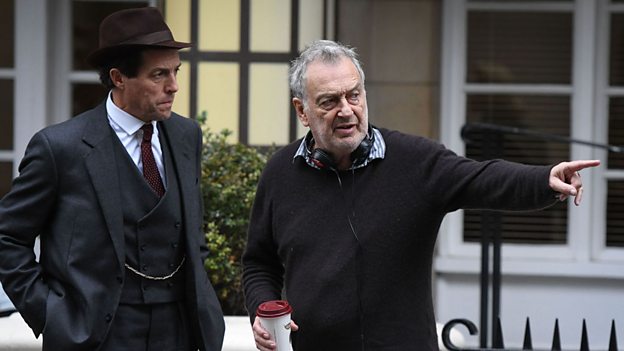 It’s a very good story... I know people have tried to make it as a film, but it would have got lost in the cinema. On television it’s absolutely in the right place. It has come home.Stephen Frears - Director

What made you get involved with the project?
It’s a good story. It’s a very good book that John Preston wrote and then eventually Russell wrote a very good script. So it was easy.

How much did you know about the Thorpe affair?
If you were my age, you know everything. There must have been details that I didn’t know, but I remember the case very well. Rinka… the writing on the pillar… It’s just part of your life. Anybody my age would say the same thing.

What did you think of Russell’s adaptation?
Very, very good. Really terrific writing. A pleasure to read and a pleasure to direct.

Was there a particular tone or style that you were trying to achieve?
It had to be comic and it had to be dramatic. That’s good fun.

What are the difficulties with that?
Well you’re always balancing two different things. Is it too funny? Is it not funny enough? All of the usual things. But that was the pleasure of it – to get that balance right. I hope the films are very funny and I hope that they’re very dramatic. You want to know what happens next. It is the most ludicrous story. You can’t believe the incompetence.

What will attract audiences to the film?
Because I’m the age I am, it’s part of my history so the history is very solid for me. It’s repression and class, homosexuality being legalised. It’s things that occur frequently in British social life.

Could you possibly summarise the story?
No. I’ve tried and failed. There’s three films. If I could summarise it, I would have. No, it’s a very good story. It’s been told – I think – in the right place. I know people have tried to make it as a film, but it would have got lost in the cinema. On television it’s absolutely in the right place. It has come home.

What was Thorpe like as a politician?
Thorpe was a very interesting politician. He was very good on Europe, good on race and things like that. North Devon is a very Conservative part of the country and to have held it as a Liberal seat for as long as he did is a real achievement.

Was there anything on set that reminded you of your youth?
Cars… they’d suddenly turn up with a Morris Minor.

What was your reaction to casting Hugh Grant as Jeremy Thorpe?
Everyone seemed very pleased.

Were you quite pleased?
Yes. Yes, of course. He’s a wonderful actor.

What do you think about his portrayal of Jeremy Thorpe?
Fantastic. I think he’s a great, great actor. A great British actor.

What were your first impressions when you saw him walk on set? Did you think that’s Jeremy Thorpe straight away?
I always thought he’d be the right person. I think he looks rather like Thorpe. He is in his own way quite cadaverous. I think he’s fantastic – staggering – and he’s very funny of course. Thorpe was a funny man and the whole thing is so ludicrous, so he could both play it dramatically and on a comic level as well. That’s what’s so good about him.

How was it working with animals – specifically the Great Dane?
Ghastly. They came to me and they said “Great Danes are famous for being stupid.” So it was a nightmare. I think we ended up with three. The night we filmed with Rinka, it was raining – but they said “oh they don’t like the rain and they don’t like the dark”. The whole thing was idiotic.

Would you work with animals again?
Only if I have to.

To an audience member who hadn’t seen this, which bit would you say they would really enjoy?
I don’t know. But it’s a very good story.