Kay Mellor's The Syndicate returns to BBC One and goes stateside 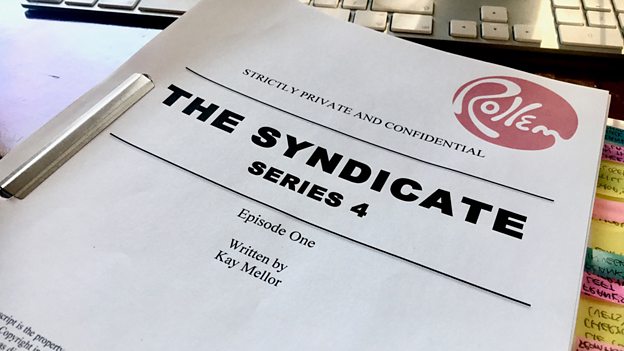 I’m thrilled to be working with the BBC again. As ever, it’s a brand-new Syndicate and has a fresh and unique transatlantic story.Kay Mellor

Category: BBC One; Drama; Commissioning
BBC and Rollem Productions’ are delighted to announce a new stand-alone series of the critically acclaimed and hugely popular BBC One drama The Syndicate from the pen of the Bafta award-winning writer Kay Mellor (creator of Band Of Gold, Fat Friends, In The Club and Girlfriends).

When the owners of Woodvale Kennels announce they are selling the business to a larger company, the staff are devastated to realise they may well be out of a job.

As the team’s future is thrown into question the weekly lottery looks like their only lifeline. So when the friends check the ticket and the machine goes off they are ecstatic! But is everything as it seems and will our syndicate get what’s rightfully theirs? Set between Leeds and Las Vegas, we see our kennel workers spend every last penny they own to see justice done.

In true Mellor-drama style this ‘cat-and-mouse’ thriller is peppered with the comedy, pathos and high-drama audiences have come to expect from The Syndicate.

Kay Mellor says: "I’m thrilled to be working with the BBC again. As ever, it’s a brand-new Syndicate and has a fresh and unique transatlantic story. I couldn’t resist setting this series in a dog kennels either. I have a Shih-tzu myself and love animals - they say you should never work with kids or animals but I’m a sucker for a challenge and can’t wait to get started.”

Piers Wenger, Controller of BBC Drama, says: “We are so happy to have The Syndicate coming back for a fourth series on BBC One. Kay’s gripping, intriguing and heart-warming scripts will take viewers on a rollercoaster of emotions as a brand new set of characters from a Leeds dog kennels win the lottery and set their sights on Vegas.”

Following the UK premiere, the series will premiere exclusively as a BritBox Original in the US and Canada. Soumya Sriraman, President and Founder for BritBox, says: “How do you improve one of Kay’s compelling cat-and-mouse stories? Simple, add dogs. I can’t wait for the BritBox community to experience this new world of Kay’s, grappling with contemporary concerns through the lens of her taut, thrilling plots."

The Syndicate is a 6x60' drama series and has been commissioned by Piers Wenger, Controller of BBC Drama. Episodes one and two will be directed by Kay Mellor (Girlfriends, Love, Lies & Records) and the series produced by Josh Dynevor (Get Even, Girlfriends). The executive producers are Kay Mellor and Yvonne Francas (Our Girl, Death In Paradise) for Rollem Productions and Gaynor Holmes for the BBC. It is a Rollem production for the BBC and BritBox in North America.

This evening, Kay Mellor will receive the Special Recognition award at the 2020 Broadcast Awards. It recognises her immense contribution to British drama, over four decades, chronicling modern Britain often through the prism of working-class women.